Several years ago, semiconductor stalwart Broadcom (NASDAQ: BRCM) made a fairly aggressive pass at picking up network convergence vendor, Emulex (NYSE: ELX) for a cool $11/share (after initially bidding $9.25). Emulex's management pushed back hard, claiming that this materially undervalued the company. Of course, Emulex's stock sits at $5.58 today, suggesting that it should have taken the offer. While Emulex is unlikely to get a second shot at getting taken out by Broadcom, Mellanox (NASDAQ:MLNX) -- a competitor to Broadcom in a number of key areas -- could be a great fit for Broadcom.

What does Mellanox bring to the table?
Broadcom is the world leader in Ethernet switches and network interface card ("NIC") silicon with industry-leading market share. 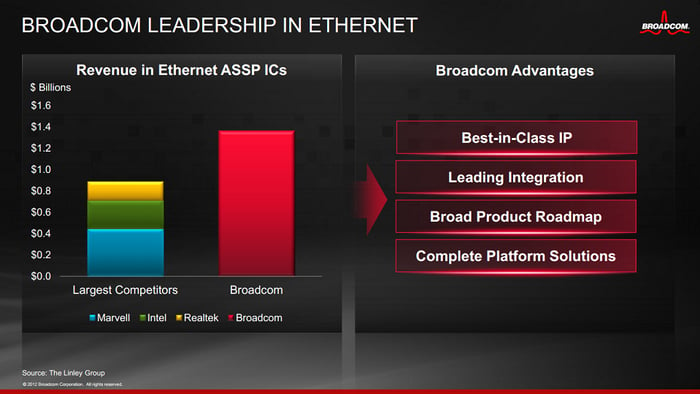 Mellanox, too, competes in Ethernet. Now, it's not as large a player as Broadcom or the other players shown on the above slide, but Mellanox grew Ethernet to become 19% of its revenues in the most recent quarter (roughly $18.75 million) and expects to continue that growth. So, from a consolidation perspective, picking up Mellanox might make sense, but that doesn't seem like enough.

It's all in the InfiniBand
What Broadcom would be interested in -- if it were interested in Mellanox -- would be the company's InfiniBand business. Ethernet is the cost effective, "standard" way to connect everything up. But for those who need more bandwidth/performance (think high performance computing), there's an interconnect known as InfiniBand.

Until recently, there were only two vendors that developed and sold InfiniBand switches and adapters: QLogic (NASDAQ:QLGC) and Mellanox. QLogic's technology, however, fell pretty far behind what Mellanox had and as a result ended up selling the business to Intel (NASDAQ:INTC), which presumably has been nurturing it and preparing that IP for integration onto its Xeon and Xeon Phi processors at some point down the line.

Could Broadcom see a strategic benefit?
The big "problem" with Mellanox today is the fear that Intel will integrate much of the relevant InfiniBand silicon onto tis processors and render Mellanox's stand-alone business obsolete. While there is certainly risk that Intel can do this for some variants of its processors, the argument that Mellanox bulls rebut with is that Mellanox can stay one step ahead of what Intel is doing on the InfiniBand side of things with its discrete products.

If the market for discrete InfiniBand adapters along with the attendant switches remains robust and continues to grow, then Broadcom could see real strategic value in adding that to the product portfolio. That said, strategic may not be enough for a company like Broadcom that has shown time and again that it will very dispassionately divest businesses that underperform, so the numbers need to make sense.

What would the financials look like?
Mellanox today trades at a market capitalization of $1.57 billion, with about $340 million of that in net cash on the balance sheet. So the underlying business is valued at about $1.23 billion. In exchange for that, investors get a business that should be on-track to do about $443 million in sales this year (per current sell-side consensus) and then $541 million in the following year.

Additionally, on a non-GAAP basis (excluding share-based comp), Mellanox is on track to do about $0.81/share this year and then should ramp up to $1.58/share next year (as Mellanox will be deep into the ramp of Intel's Grantley platform, which will drive high performance computing sales) or $35.64 million and $69 million, respectively. As far as Broadcom goes, this would translate into incremental EPS of just $0.13 for the coming year.

Foolish bottom line
The idea here is interesting, particularly given that by picking up Mellanox, Broadcom grabs more Ethernet share and becomes the world's leading supplier of InfiniBand-related products. But in the near term, this would not add significantly to Broadcom's bottom line, and of course fears that Intel's own InfiniBand business could eventually marginalize Mellanox's business will be an important part of any such decision.

That said, one should never buy a stock solely on a buyout thesis since this would simply be gambling and not investing. But for investors already convinced that Mellanox's business is undervalued here, the idea of a buyout by the likes of Broadcom can, at the very least, be interesting speculation.