The Dow's Big Bank components, JPMorgan Chase (NYSE:JPM) and Goldman Sachs (NYSE:GS), were down in the morning session, as were shares of Bank of America (NYSE:BAC).

A tale of two dividends
This quarter was supposed to be Bank of America's glorious return to form. The company was due to quintuple its dividend to $0.05 per share and to start buying back stock in mass. We were talking about $4 billion of capital being returned to shareholders.

Shareholders should be celebrating!

The reason they're not is a 0.05% error in the bank's capital ratios that forced BofA earlier this spring to resubmit its capital plan for approval by U.S. regulators (that approval has not yet been granted). Because of that miscalculation Bank of America's board of directors announced yesterday that the bank would again only issue a dividend of 1 penny per share for the second quarter.

An unfortunate reminder
At the time the error was announced, analysts and pundits went a little crazy. There was vitriol in the air.

In my view, rational thinking flew out the window. You can clearly see the market punishing the Bank of America's stock in April and May. 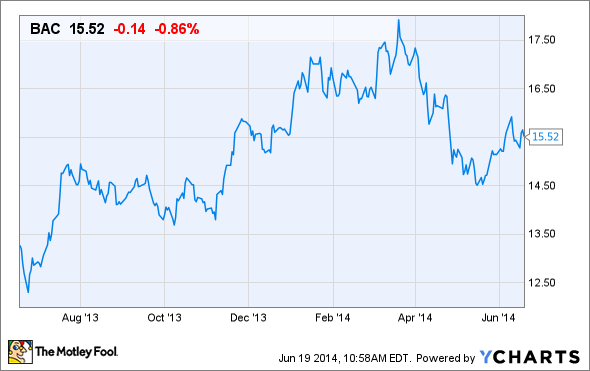 I wrote about some the overreactions by analysts and pundits here. My views remain the same today.

Yes, Bank of America's miscalculation was a huge embarrassment. Yes, there are big-picture questions about any human's ability to manage an institution with $2 trillion or more in assets. Yes, Bank of America has a pretty miserable track record. I get all that.

But this short-term setback is not the reason to be concerned about Bank of America. In all likelihood, the feds will approve the bank's resubmitted capital plan, and shareholders will see a larger dividend come the third quarter.

The real reason to be worried: History repeats itself
I recently spoke with fellow Fool John Maxfield about banks, and we agreed on the real problem with Bank of America as a long-term investment: It simply doesn't have the credit culture to sustain its value in downturns.

The best banks make good loans in both up and down markets. Wells Fargo (NYSE:WFC) is exemplary at this, and that's why the bank commands such a high valuation.

Bank of America is in the mess it's in today because of poor risk management. The bank made bad loans, and it bought other banks with horribly risky loan portfolios.

Long-term investors should avoid Bank of America, but not because of a rejected capital plan. Look at this chart showing the respective performances of Bank of America and Wells Fargo in the early 1990s -- the last time the U.S. had a significant real estate crisis. 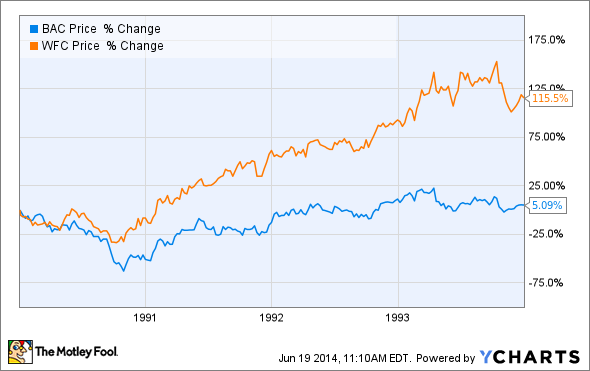 And now ook at this chart from 2005 to today. It's a different decade, but the exact same story. Wells, thanks to its far superior risk management culture, has decidedly outperformed Bank of America. 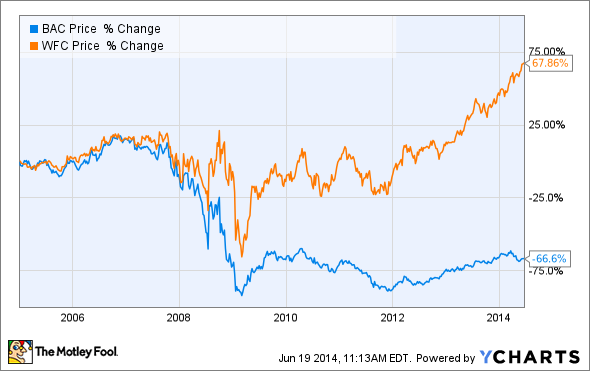 The charts speak for themselves. Wells Fargo would have made you rich. Bank of America would have sent you to the poor house.

If you're in the game of bank stocks, remember this: credit quality is the single most important factor in a bank's long-term success.