BreitBurn Energy Partners (OTC:BBEPQ) is off to a slow start in 2014. After completing $1.8 billion in acquisitions over the past two years the company hasn't made one single deal so far this year. Because of that it remains well off its target of acquiring $600 million of assets in 2014. Moreover, its goal is being upset by smaller rivals like Atlas Resource Partners (NYSE: ARP) and Memorial Production Partners (NASDAQ: MEMP), which are the ones making all of the distribution fueling acquisitions in 2014.

BreitBurn hasn't been having the best of luck with its most recent acquisitions. The company ran into problems integrating its last two deals as the sellers left the assets in less than ideal conditions upon handing them off to BreitBurn. Because of that the company had to scramble to find supplies to keep the oil flowing, which had an impact on the company's production the last couple of quarters. That being said, the company does have a very disciplined approach to acquisitions as the following slide shows. 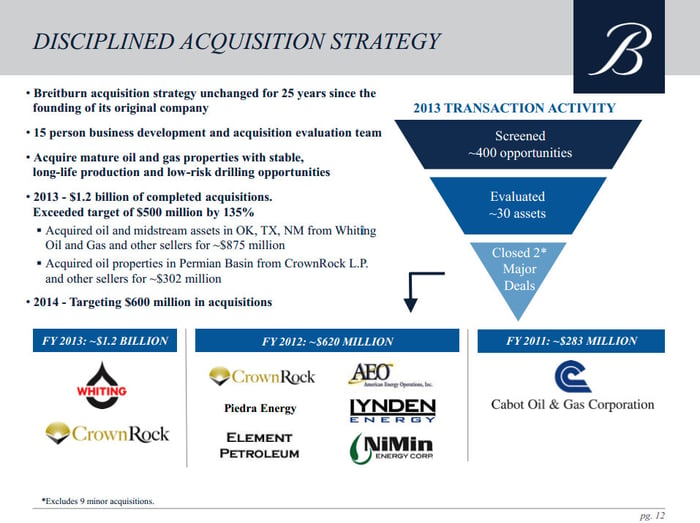 That approach has worked for the company the last few years as it has exceeded its acquisition targets, which has fueled substantial distribution growth. Overall, the company spends a great deal of time evaluating each potential deal to make sure it fits well within the company's portfolio of stable, long-life producing properties.

The problem that BreitBurn is starting to face is that its MLP peer group is growing to the point where these companies are becoming stronger competition for the properties BreitBurn Energy Partners likes to acquire. CEO Hal Washburn noted this on the company's first quarter conference call saying, "[S]o far this year we have not been a successful bidder." He said that the company had looked at some properties that some its peers either bought or were in the process of buying but that his company wasn't willing to pay what its peers were paying. While we don't have specifics on which deals he is referring to, we do know that many of BreitBurn Energy Partners' peers have been successful bidders on the types of properties it likes to acquire. 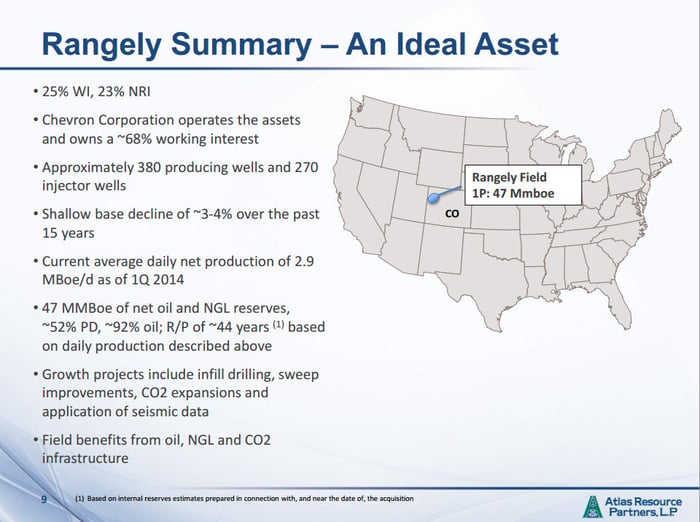 As that slide points out this is a field that has had an average annual decline rate of 3-4% over the past 15 years and produces about 90% and 10% NGLs. MLPs like Atlas Resource Partners and BreitBurn Energy Partners are really drawn to assets like these because the low decline rate means the company won't need to spend as much money to maintain its production levels. In the case of this particular asset Atlas Resources Partners is acquiring a field that has enough reserves to produce for the next 44 years at a very low rate of decline. It's base production like this that will be a solid foundation for the company's distribution for years to come.

In another notable deal this year Memorial Production Partners is spending $935 million on a carbon dioxide flood project in Wyoming. This asset is also liquids rich as 100% of the production is oil and NGLs. Further, the asset has an average annual decline rate of about 5% and is expected to continue producing low decline oil for the next 39 years. Again, this is a perfect MLP asset as it will provide exceptional base production for Memorial Production Partners. Either asset would have made a nice addition to BreitBurn's portfolio.

Investor takeaway
As we near the midway point in the year BreitBurn Energy Partners is nowhere near hitting its target to acquire $600 million in oil and gas properties this year. That being said, with one stroke of the pen this time last year the company made a big oil deal that blew away its 2013 acquisition target by exceeding it by 80%. So, while the company has been foiled so far this year in its attempts to acquire additional oil and gas properties, one big deal could easily do the trick. Needless to say, BreitBurn Energy investors are likely in for a bit more excitement in the second half of the year.