AK Steel (NYSE:AKS) gets over half of its sales from the auto sector. That was a bad thing when companies like General Motors (NYSE:GM) were reeling from the deep 2007 to 2009 recession. However, May's sales back the steel maker's expectations of continued auto growth.

General Motors: Firing on all cylinders
Please pardon that pun, but General Motors' May sales performance was strong. It was the company's best sales month since August of 2008. (That was before the company careened into bankruptcy in mid-2009.) Overall, sales were up 13%, with Kurt McNeil, General Motors' U.S. vice president of Sales Operations, explaining: "The momentum we generated in April carried into May, with all four brands performing well in a growing economy and 17 vehicle lines posting double-digit retail sales increases or better."

Reliant on autos
It's an understatement to say that autos are important for AK Steel; it derived 51% of its sales from cars in 2013. Seeing strong trends in the auto sector is a good thing. It also helps to back up AK Steel's forecast for auto sales to increase from an estimated 16.8 million builds in North America this year to 17.8 in 2017. In 2008, that number was a comparatively paltry 8.6 million.

It's no wonder that AK Steel's earnings fell off a cliff that year, dropping from nearly $3.50 a share in 2007 to a nickel or so in 2008. The next year, AK Steel dipped into the red—exactly where the bottom line has stayed for five years now. The roughly $0.60 a share loss in the first quarter doesn't inspire confidence about the future, either.

The U.S. auto sales trends at General Motors and others does, though. That may be why AK Steel's shares are up 80% or so over that last 12 months. The longer-term concern with this positive picture, however, is aluminum, which is starting to make inroads in the auto space. 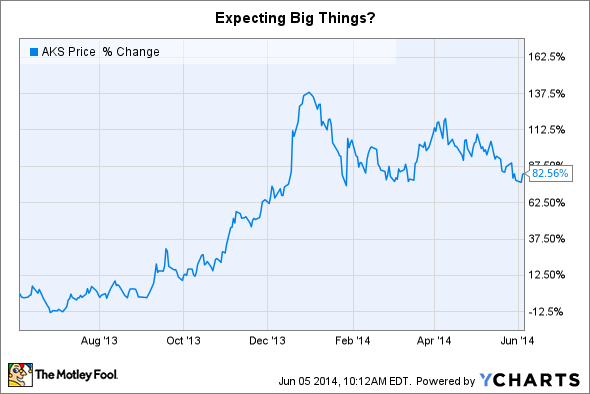 Not a big concern, yet
AK Steel counters this long-term concern with some basic facts. For example, switching to aluminum requires retooling a factory because the metals use different manufacturing processes. AK Steel, meanwhile, is working on new lightweight steels that reduce the need to switch to aluminum. Also, and this is the big one, steel costs less than aluminum.

In fact, that last one has led some industry watchers to predict that aluminum will remain a niche product because auto industry growth is increasingly coming from emerging markets. Profit margins in these regions are tight, making an industrywide switch to aluminum a non-starter.

For example, in the first quarter General Motors' adjusted earnings before interest and taxes (EBIT) was $600 million in the United States, including $1.3 billion in recall costs. The company's international division (which excludes mature European markets and South America, but includes fast-growing China) had EBIT of $300 million—with no added costs. Clearly, General Motors isn't making as much as it does in mature markets in some of the world's fastest growing markets.

A similar dynamic is true for cheap cars, even in developed markets with higher margins. High-end fare could probably handle the price increase that aluminum would require, but economy cars not so much. Moreover, these small cars generally offer good gas mileage already, reducing the need for aluminum. While aluminum's share of the auto sector is going to grow, it doesn't look like a big threat to AK Steel today.

Is the future priced in?
The big question with AK Steel, however, is if a positive future is already priced into the shares. With continued losses and a big price jump, the answer is probably a "yes." While I wouldn't cross the steel maker off your watch list, you would do well to wait for it to turn a profit and/or pull back before considering jumping aboard.