The Internet of Things will connect things like home appliances to the Internet and, increasing bandwidth needs. Source: Qualcomm.

The Internet of Things will soon connect formerly simple objects to the Internet -- like in-home appliances or even dog collars -- in order to glean information from them, or allow devices to automatically share important information with each other.

Cisco (NASDAQ:CSCO) estimates that there will be nearly 50 billion connected 'things' by 2020, and some have pushed estimates even higher. Even if a fraction of these connected things come online, it's clear there will be substantially more Internet-enabled devices in our near future.

So how does this effect existing wireless bandwidth? For one, it could put a strain on existing cellular networks, which is why Qualcomm (NASDAQ:QCOM) is backing a new long-range and low power Wi-Fi standard. Others think a completely new cellular network devoted exclusively to connected things is needed. Or, depending on whom you ask, there's absolutely nothing to worry about at all. 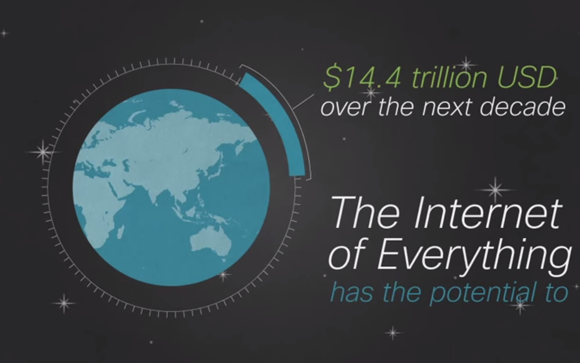 The problem
Right now, there hardly appears to be a consensus on tackling growing Internet of Things, or IoT, bandwidth, with Cisco even saying that there's no real problem. On the company's blog earlier this month, Cisco's director of thought leadership, Thomas Barnett, Jr., wrote this about machine-to-machine devices:

Not everyone is so optimistic though.

One of the main ideas behind limited bandwidth for Internet of Things devices is the fact that these things will use wireless spectrum to send their signals. Much like smartphones, connected things will send data via cellular signals, which can already reach capacity in high-traffic areas like cities.

In a recent Phys.org article, Ian Oppermann wrote that the megahertz frequencies that allow wireless communication are allocated for television signals, radio stations, emergency services and mobile phones. Another subset of communications, particularly the potential size of IoT, could put a tremendous strain on that spectrum.

Oppermann wrote, "While we continue researching new ways to make spectrum use more efficient, and future allocation of spectrum blocks may change over time, the fundamental situation is that spectrum is an increasingly rare resource."

That thinking mirrors another article in InformationWeek, which referenced a recent survey showing that while 70% of the companies surveyed expected wireless bandwidth demand to increase, only 15% of companies are planning on expanding their networks. The gap in demand for wireless bandwidth and capacity could end up crippling IoT, particularly in parts of the world where limited capacity already exists.

The solution
Whether or not IoT devices use just a fraction of the bandwidth that will be available in the future or take a significant portion, some companies have already begun tackling the problem head on.

Qualcomm is backing a long-range, low power Wi-Fi standard that could be used for Internet of Things devices. U.S. companies are considering such a network that would allow soon-to-be billions of connected things to send wireless signals without weighing down existing cellular networks. While it's still in development, part of the network is expected to launch in 2016.

A French start-up company, SigFox, is taking a different approach though. In an MIT Technology Review post last month, Tom Simonite mentioned that SigFox is building out a small cellular network in Silicon Valley exclusively for IoT devices. It's part of the company's ambitions to build a worldwide IoT cellular network, and it already has part of it live in France.

Simonite wrote, "Objects connected to SigFox's network can operate at very low power but will be able to transmit at only 100 bits per second -- slower by a factor of 1,000 than the networks that serve smartphones. But that could be enough for many applications." SigFox's network could help solve spectrum and bandwidth problems by ensuring that the large amount of IoT devices don't max existing networks out.

Foolish final thoughts
While there may be a legitimate concern for limited bandwidth in the Internet of Things world, I tend to think that companies will continue creating ways to both increase network capacity and decrease bandwidth usage by devices. Of course some things like spectrum are more or less fixed, but creating cellular networks exclusively for IoT devices and then off-loading those connections occasionally onto Wi-Fi networks might be the solution.

Over the past decade we've added billions of connected mobile devices that devour massive amounts of data, and yet companies have built and expanded networks to keep them running. I can't imagine the same won't be true for the Internet of Things, particularly when these connected devices will use a fraction of the data that our mobile devices are currently using.