For investors in General Electric (NYSE:GE), the company's revenue trend in recent years tells a worrying story. As the following chart reveals, sales have been moving in the complete wrong direction since 2009: 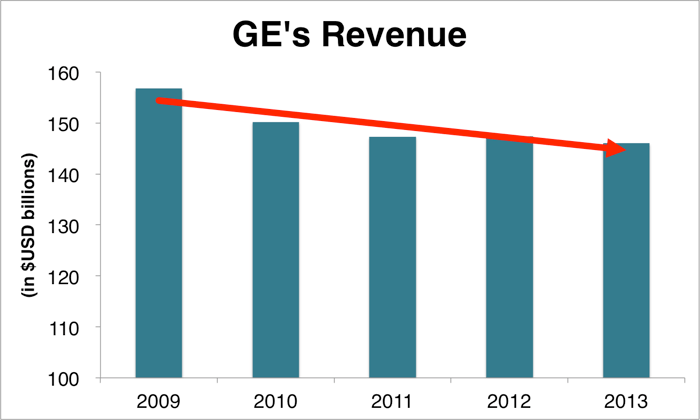 Now, it's perfectly normal for established companies to experience a hiccup in sales every once in a while, but five consecutive years without growth can cause investors to start pulling their hair out. Should shareholders be sinking their hard-earned cash into a company that looks to be drifting astray?

To answer that question, Motley Fool senior manufacturing specialist Isaac Pino discusses GE's recent trajectory, digs deeper into this turnaround story, and reveals a trend that's actually moving in the right direction at GE. Despite its status as the sixth largest public company in the world, GE is facing some headwinds at the moment. Still, there's reason to believe that management can continue to create value for investors even in the face of nonexistent revenue growth. Click on the following video to find out exactly what's going at this American industrial icon.