The Dow Jones Industrial Average is home to many of the most outstanding companies in the world. Among that exclusive group of businesses, Disney (NYSE:DIS), Coca-Cola (NYSE:KO), and Nike (NYSE:NKE) are solid enough to be bought and held for the long term -- perhaps even forever.

The magic never ends with Disney
Disney owns a unique collection of brands and intellectual properties, and that's an invaluable source of competitive strength. The House of Mouse has built a deep emotional connection with consumers from different generations over the decades, which is something many other players in the industry can only envy.

The movie business is traditionally considered fickle and unpredictable, but Disney's library of widely popular brands and characters is a huge advantage in the industry. Importantly, successful movies create opportunities to profit from that content via multiple venues, including live shows, park attractions, and merchandising.

ESPN is major cash cow that generates nearly 75% of Disney's operating income in the networks division. The network is the undisputed leader in sports, and it would be enormously difficult for competitors to replicate the expensive long-term contracts ESPN has signed with major sports leagues and associations in different disciplines around the planet.

Disney has a rock-solid track record of success over the years, and recent financial reports suggest the business keeps firing on all cylinders. Total operating income increased 34% to $3.35 billion during the first quarter of 2014, fueled by healthy increases in all of the company's business segments.

Coca-Cola's sweet capital distributions
No company is stronger than Coca-Cola when it comes to the global soft drinks industry. This international juggernaut owns 17 brands that each generate over $1 billion in annual revenue, in addition to 20 other growing brands producing between $0.5 billion and $1 billion in sales. Coca-Cola's gigantic distribution network and abundant financial resources to invest in areas such as marketing and advertising provide additional sources of competitive strength. 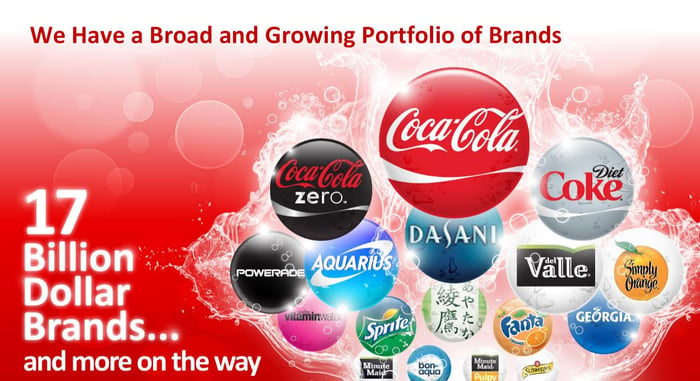 Soda consumption in many developed regions has been stagnant in recent years due to market saturation and the trend toward healthier eating and drinking. This represents a considerable challenge for Coca-Cola.

However, the company owns 11 billion-dollar brands in the noncarbonated category that continue performing strongly: Sales volume in still beverages increased by an impressive 8% during the first quarter of 2014.

Emerging markets offer substantial opportunities for growth, both in traditional carbonated drinks and healthier categories. Nearly 800 million consumers will enter into the middle class by the end of this decade, and this bodes remarkably well for consumer demand in emerging markets over the years ahead.

Coca-Cola is an enormously profitable company with a long-standing tradition of rewarding shareholders with growing capital distributions. Coca-Cola has raised its dividend for 52 consecutive years, including a 9% increase announced in February. The dividend yield is about 2.9%, not bad at all for such as solid and reliable dividend powerhouse.

Nike is the world champion
Nike is the undisputed world champion in the sports shoes and apparel business. The company benefits from unparalleled brand power consolidated via decades of investing in memorable marketing campaigns and sponsoring many of the most renowned athletes in different disciplines. The Nike swoosh has become one of the most recognizable brand logos in the world.

Nike is sponsoring 10 of the 32 national teams competing in the soccer World Cup, including host Brazil. Nike sponsors six of the top 10 most marketable players in the competition, versus three for Adidas and one for Puma. Nike only entered the soccer market in 1994, and its leadership in other sports such as basketball and running is even more significant.

Nike's success in soccer in recent years shows how strategically important it can be to have a valuable brand and a big marketing budget. Not only in terms of defending the business versus the competition, but also when it comes to pursuing new growth opportunities. In business, like in sports, the best defense is sometimes a good offense.

Nike is scheduled to report earnings on June 26, so investors may want to keep an eye on financial performance, if only to make sure the company continues doing well. If history is any valid guide, Nike should continue delivering rock-solid performance in the years ahead, regardless of any short-term volatility that may arise in quarterly reports.

Foolish takeaway
When investing for the long term, it's important to position your portfolio in companies with enough fundamental strength to withstand the test of time. Disney, Coca-Cola, and Nike have been thriving for decades, and they have what it takes to continue delivering outstanding performance for the foreseeable future.