Brazil's pre-salt offshore formations are believed to be one of the largest oil deposits on earth. Some analysts estimate them to contain 50 billion to 100 billion barrels of recoverable oil.

With Petrobras (NYSE:PBR) being the dominant oil company in Brazil (it was a monopoly until 1997), investors might think this is the obvious choice to get rich from Brazil's potential oil bonanza. However, as I recently wrote, Petrobras is not likely to make a good long-term investment despite Brazil's raw oil potential. There are better alternatives for playing Brazil's coming oil boom, specifically National Oilwell Varco (NYSE:NOV).

What's wrong with Petrobras?
At least on paper, Petrobras has a lot of potential -- all located offshore where 90% of its oil reserves are located.

It took just seven years for Petrobras to reach 300,000 barrels/day (bpd) of offshore production, whereas it took nine years to achieve this in the North Sea and 17 years in the Gulf of Mexico.

So what's the problem? Simply put, Petrobras is a government-run dinosaur. It's plagued with scandals, allegations of criminal activity, and massive cost overruns. Like the politicians who pack its board, Petrobras has a long track record of making grandiose promises but delivering deteriorating operational efficiencies, disappointing results, and massively increasing debt.

For example, the investment Petrobras is undergoing (by loading up with debt) was originally supposed to increase production to over 6 million bpd by 2020.

A few months later, that target was reduced to 5.5 million bpd, and now it's been reduced again to 4.2 million bpd; that's a 50% reduction in projected production in just nine months.

While Petrobras's future growth projections are proving to be an illusion, the amount of debt it is taking on is all too real. Since 2011, it's added $53 billion in debt with the following results to show for it: 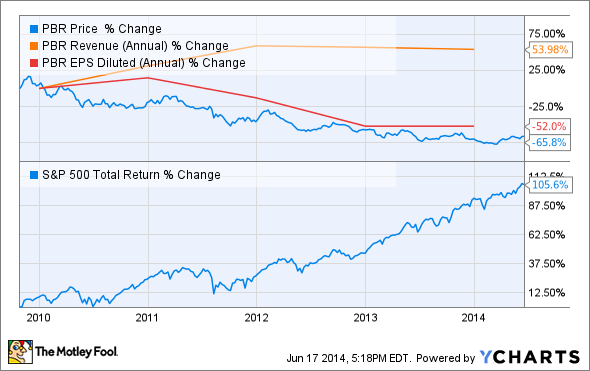 As the above graph shows, EPS has fallen off a cliff during this time of profligate spending, and shareholders have suffered mightily.

Recently, however, Petrobras' share price has soared; the company is up 50% in the last three months. 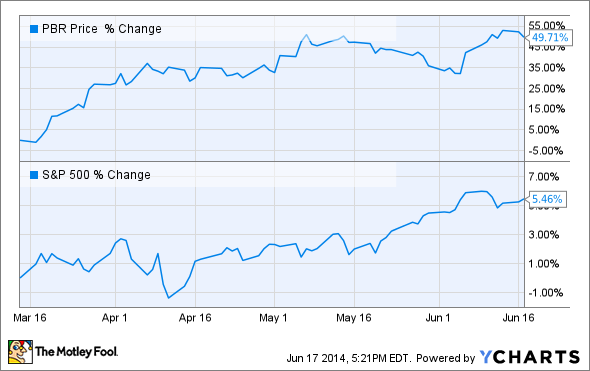 This price spike has resulted in Petrobras now trading 18% higher than its 16-year historical P/E ratio (eliminating its value proposition). The cause of the price spike? October 2014 brings presidential elections, and recent polls show that the Brazilian president's lead over her opposition has narrowed to 19%.

Never mind that investing based on election outcomes is a short-term strategy that doesn't work, but even with a new president in Brazil, Petrobras' fundamental problems are unlikely to be fixed any more than a new U.S. president can fix Social Security.

Why National Oilwell Varco is a better choice
The way for long-term investors to profit from the expected $500 billion in investment coming to Brazil's pre-salt deposits in the next decade is to invest in oil services companies such as National Oilwell Varco. Even if Petrobras' tens of billions in investments end up being wasted, those billions will flow through to these companies (and their shareholders), often in the form of generous dividend growth.

For example, Petrobras is attempting to build 28 Brazilian offshore rigs as opposed to buying them from expert builders in Korea. This politically driven decision will hurt Petrobras by costing the company more for lower-quality rigs. It will help National Oilwell Varco, however, which was granted a $1.5 billion contract to service 25% of those rigs.

National Oilwell Varco is established in Brazil with 1,100 employees (to meet government requirements for local sourcing) and has the relationships in place to profit from Brazil's coming boom. In the process, it's likely to be one of the best dividend growth companies of the next decade, with its current 2.4% yield and S&P Capital IQ analysts projecting a 16% CAGR dividend growth rate over the next 10 years.

Foolish takeaway
My research into Petrobras indicates that it is a poorly managed and wasteful value trap (without the value proposition). It is likely to spend tens of billions of dollars inefficiently exploiting Brazil's oil and gas bounty. However, those billions will find their way into the coffers of oil service companies such as National Oilwell Varco. With its strong track record as a dividend growth company and established relationships within Brazil's government, National Oilwell Varco is likely to deliver market-beating total returns for many years to come.