There is a great potential opportunity for Tim Hortons (NYSE:THI.DL), the "other" publicly traded coffee and pastry chain that you don't often hear being talked about in the media. It seems to always be Starbucks (NASDAQ:SBUX) this, and Starbucks that. Hopefully Tim Hortons is paying attention to Starbucks' latest move because it can be a game-changer for Timmy too.

First Timmy's results
On May 7, Tim Hortons reported fiscal first-quarter results. Total revenue popped 4.8% to $766.4 million. Same-store sales lifted 1.6% in Canada and 1.9% in the U.S. Earnings per share soared 16.9% to $0.66. Tim Hortons stated that this was "despite ongoing challenges relating to macro-economic and competitive environments, which have carried over from last year, and unfavorable weather conditions."

Marc Caira, president and CEO of Tim Hortons, credited the positive results to simplified operations, new menu items, and "enhancing" the restaurants. He stated in the press release:

Our organization has mobilized quickly to begin executing on the strategic plan we announced in February. We will see further progress this year in key areas of our strategic road map as we seek to drive sustainable long-term growth.

Going mobile
One key strategy for Tim Hortons is in the area of technology, specifically mobile paying like Starbucks has. On May 22, Tim Hortons announced the launch of mobile payment with its TimmyMe app. Starbucks already attributes 14% -- and growing -- of its domestic transactions to smartphone payments, so we know the idea works.

Tim Hortons is hoping that the mobile barcode payment-scan app will allow customers "faster" service. Again, interesting word choice. Probably more so than Starbucks, Tim Hortons has a line problem. It's probably due to its more complex menu and food choices. On previous conference calls, Tim Hortons executives mentioned that the company was looking to use technology to get the line moving more quickly.

Caira believes this will help. He stated during the May 7 call:

We believe this new payment option will improve speed of service for our guests, which is always a key concern for us in locations where capacity is stretched.

The mobile-payment app is a great step in the right direction. But Starbucks has a far better idea.

The Starbucks idea
During a recent presentation, Starbucks unveiled a pilot program that takes its mobile app to the next level. Scott Maw, CFO of Starbucks, pointed out that the company is the No. 1 payment app out there, making Starbucks a market leader in this space. Assuming the tests are successful, Starbucks expects to launch by the end of next year the ability to order in advance using your app.

This means no line. Your specialty beverage is ready for you and waiting as you walk in. Nothing kills a line faster than people who don't even need to be on it. Now imagine if Tim Hortons follows in the same footsteps.

On an operational and service level, the ability to order in advance could be even more meaningful for Tim Hortons than it is for Starbucks. Tim Hortons sells much more line-stalling food on a percentage of sales basis. The result is the average order is slower as well.

Caira stated in an interview late last year, "People are not prepared to wait in lines anymore." He said then that Tim Hortons was looking for ways to shave off its wait times as much as possible. It needs to jump on Starbucks' ordering-app bandwagon as soon as possible even though Starbucks itself still hasn't launched it. 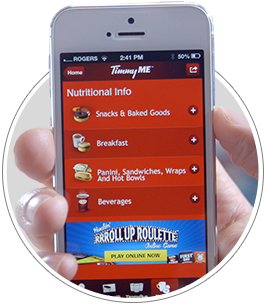 But maybe Tim Hortons is already working on that and just hasn't made any announcements yet. Back in February, Caira had some words that sort of hinted at such. He stated: "Any time you make it easier for your guests to order, reduce complexity for the restaurant team members[,] or decrease the time it takes to execute an order, it makes a difference when you multiply it across the millions of transactions we complete every day."

A mobile-ordering app will be coming to Tim Hortons in this Fool's opinion. Watch for it.

Will Tim Hortons Go All Starbucks on Us? @themotleyfool #stocks $SBUX $THI.DL Next Article
Current