Royalties are a unique business model worthy of your consideration. A royalty entitles the owner to a percentage of production, without assuming any of the costs associated with developing or maintaining the underlying. In addition, most royalties are held in perpetuity, offering the owner a long-term call option on the property.

4 royalty stocks that aren't Franco Nevada, Royal Gold, or Silver Wheaton
Digging through the article, you'll notice that each company is traded on the Toronto Stock Exchange. While each has an over-the-counter (OTC) listing in the U.S., owning some stocks in Canadian currency adds an additional layer of diversification to your investment portfolio.

Descendants of a royal bloodline?
Incredibly, Freehold Royalties (TSX:FRU) owns a piece of 30,000 oil and gas wells. Development and production is handled by third-party operators such as ConocoPhillips, Encana, Devon, and Apache. How much production is attributable to Freehold? During the first quarter, 8,623 barrels of oil equivalent per day, of which royalty production accounted for 74%. Freehold's trailing-12-month cash dividends total CN$1.68 per common share, representing a current yield of 6%.

How about reserves? Also, what are the prospects for exploration and future discoveries? 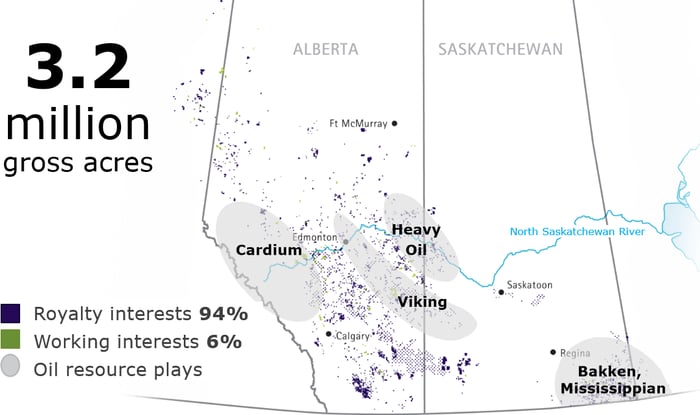 Speaking to the stickiness of royalties, a portion of Freehold's mineral rights date back to 1670, when they were granted by the King of England to the Hudson's Bay Company.

Exploring a very rich territory
Here's the prospect generator's playbook: Identify a rich territory before everyone else does, stake a claim over the entire district, discover something with economic value, hand it over to a major mining outfit, collect royalties, then repeat.

Virginia Mines (TSX: VGQ) is an example of what happens when everything goes according to plan. It staked a 5,800 square kilometer land package in northern Quebec -- the emerging James Bay region, to be more precise (pictured below). 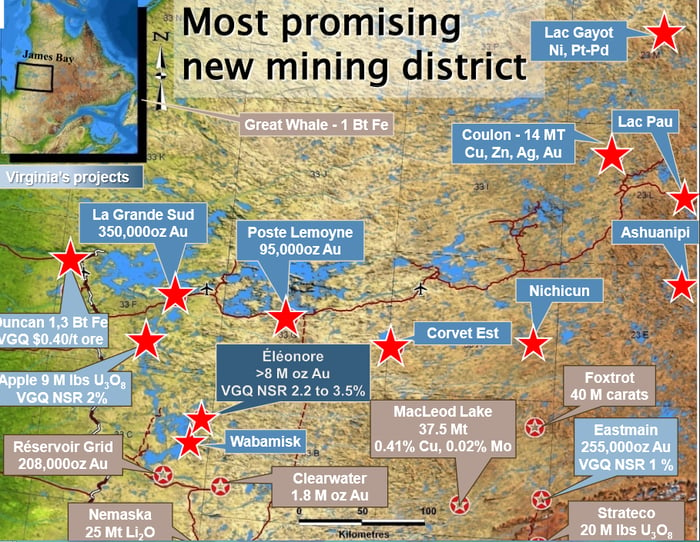 Eureka! Virginia's team discovered the Eleonore project in 2004. Goldcorp acquired the property and invested more than $1 billion bringing it toward production (scheduled for Q4 2014). Now then, after much time and hard work, Virginia reaps the rewards -- a 2.2% royalty on the first three million ounces of gold produced. During the first five years, Goldcorp expects to produce between 280,000 and 560,000 ounces annually.

Virginia's team is recognized as being one of the best in Canada, having made six discoveries in the past 15 years. It has a strong inventory of 11 gold properties, eight base metal properties, and 12 royalties. With over $40 million in working capital and no debt, Virginia has the ability to advance properties on its own, while simultaneously partnering with Goldcorp, AngloAmerican, IAMGold, and Xstrata to do the heavy lifting.

Is this Canada's most diversified royalty company?
Breaking it down by commodity, the royalty portfolio owned by Altius Minerals (TSX:ALS) offers exposure to coal, iron ore, potash, nickel, uranium, cobalt, and copper. Once upon a time, Altius was just a sleepy stock that owned a 3% net smelter return royalty on the entire Voisey's Bay district!

More recently, Altius invested $241 million to acquire 11 production stage assets, sending them into the big leagues practically overnight. Each property is managed and operated by stable counterparties such as Potash Corp, Teck, Agrium, and Mosaic. Six of these mines represented over 60% of Canada's potash production last year. 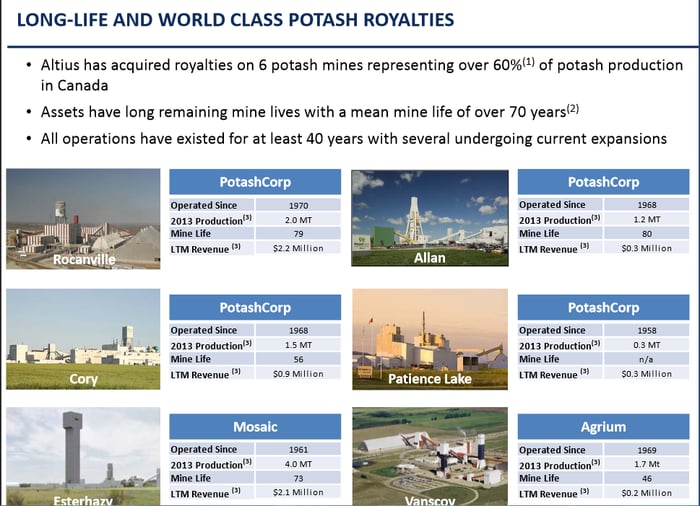 I recommended the stock here, just prior to the announcement and resulting 50% price increase. In addition to the diversified royalty portfolio, Altius owns 33 million shares of Alderon Iron (valued at $42 million) and 8% of Virginia Mines.

The tail wagging the dog
With a track record dating back to the 1940s, Iron Ore Company of Canada (IOC) is Canada's largest iron ore producer, and among the top five producers of iron pellets in the world. Labrador Iron Ore Royalty Corporation (TSX:LIF) owns 15% equity in IOC. Additionally, it collects a 7% gross overriding royalty and a $0.10 per tonne commission on all iron products produced. While higher iron prices are good for all parties involved (Rio Tinto owns the majority of IOC), Labrador's royalty is taken "off the top." In other words, Labrador still gets a royalty even if IOC isn't profitable. At current production levels, IOC has 29 years worth of reserves. Iron ore products are transported via its wholly owned Quebec North Shore and Labrador Railway, a 418 kilometer rail line that links the mine to a year-round port facility. The Labrador Royalty Corporation distributed $1.87 per share in 2013.

Compared to the three royalty stocks mentioned above, Labrador is not diversified.

Final thoughts
Royalties are a business model worthy of your consideration. While it may take an extra step or two for U.S.-based investors to buy stocks in Canadian currency, it does add an extra layer of diversification to your portfolio.

4 Royalty Stocks You Might Not Know About @themotleyfool #stocks $ATUS.F $ALS $FRU $LIF Next Article
Current