The Dow Jones Industrial Average (DJINDICES:^DJI) was up more than 52 points as of 11:30 a.m. EDT. Intel (NASDAQ:INTC) was one of the index's best-performing tech stocks, while fellow tech stocks Google (NASDAQ:GOOG)(NASDAQ:GOOGL) and OmniVision (NASDAQ: OVTI) were also active in early trading.

GDP revised sharply lower
The Dow Jones' rally comes despite the Bureau of Economic Analysis' newly released final estimate that U.S. GDP fell 2.9% in the first quarter, on an annualized basis. Economists had anticipated a contraction of just 1.8%.

Investors may have been looking past the poor GDP report for a variety of reasons. For starters, it's backward-looking, providing a snapshot of the economy during the first quarter of this year. The decline was also due almost entirely to lower than expected spending on health care. It's not immediately clear why health care spending fell, but the Affordable Care Act may have had something to do with it -- a number of the law's provisions went into effect in the first quarter of this year. 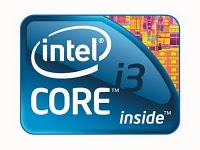 Intel leads Dow Jones higher
Shares of Intel rose nearly 1% by late morning. With Wednesday's gain, the chipmaker's stock is now up more than 16% in the last month.

Intel has been benefiting from a perceived improvement in the traditional PC market, which it continues to depend on for the majority of its revenue. Although consumers may have moved on to mobile devices, businesses still rely on PCs and appear to be purchasing many units to update their existing line of devices.

Google appears set to unveil a number of new products during its keynote speech. Possibilities include a new version of Android, an Android-powered set-top box, and Android-powered wearable gadgets. Google may even unveil some radical new technology -- according to 9to5Google, the company could unveil nano robots that would be capable of detecting cancer.

With expectations high, it's possible that Google could give back its gains later in the session if its keynote speech disappoints. Investors in the space should expect volatility as the session goes on.

OmniVision tumbles on downgrade
Among tech's worst-performers, shares of OmniVision Technologies were down more than 3.4% early in Wednesday's session. The sell-off may have been prompted by Stephens' downgrade of OmniVision stock to equal weight.

Stephens was not alone in being wary of OmniVision shares -- yesterday, MKM Partners warned that the semiconductor space was overbought, and that OmniVision was among the best candidates for selling. It should be noted that MKM Partners' recommendation was based on the technicals, a form of analysis not endorsed by The Motley Fool. Still, that sort of negative sentiment can weigh on shares.