The Macau gaming sector, including companies like Las Vegas Sands (NYSE:LVS), Wynn Resorts (NASDAQ:WYNN), and Melco Crown (NASDAQ:MPEL), has been beaten down over the last few weeks. Concerns over compliance issues, lower May revenue, and whether or not the World Cup will lower June and July revenue has hit these companies' stock prices.

However, things are still looking very good for the industry over the next few years and plenty of reasons remain for bullishness on these three casino companies. Citigroup and J.P. Morgan have both put buy ratings on Macau's gaming sector. The Citigroup analyst said that "We remain bullish and believe the sector has been oversold. Recent sector concerns have hit valuations, and with [gross gaming revenue] projections falling across the Street, expectations are low." Meanwhile, the J.P. Morgan analyst reaffirmed the firm's Buy rating and raised the target price for Las Vegas Sands to $91, Wynn to $246, and Melco Crown to $51.

Your 3 best bets in Macau
So with these bullish highlights for the Macau gaming industry, which companies are the best buys for Foolish investors looking to find a winning bet? Here are your three best bets.

3) Wynn Resorts
Wynn Resorts has been expanding rapidly in Macau over the last decade, and now counts on Macau for 75% of its global revenue. This helped the company post a great first-quarter 2014 earnings release with nearly 10% revenue growth year over year.

The company was able to increase its mass-market revenue in Macau during the first quarter by over 23% over the first quarter of 2013, which helped drive up the company's hotel occupancy rate from 93% to 98% at the same time. The company will soon see an even bigger surge in its Macau revenue from the addition of its $4 billion Wynn Palace Cotai which could open as early as the end of 2015.

Wynn Resorts currently trades at a P/E multiple of around 18. With a price target of $248, this stock's beaten-down price of around $200 is a good bet now. However, it is not the best bet. Next up is the local competitor straight from Hong Kong.

2) Melco Crown Entertainment
Melco Crown, the only pure Asian gaming bet in this list with an origin in Hong Kong and no U.S. holdings, is seen by some analysts as the best bet on Macau growth. Melco Crown currently operates two casinos in Macau: City of Dreams in Macau's main strip called Cotai, and Altira Macau in nearby Taipa. These casinos did very well for the company in the first quarter of this year, which drove the company's revenue up 19% over the first quarter of 2013.

Coming next is Melco Crown's Studio City casino. This cinematically themed integrated resort on the Cotai strip is set to be better than anything Melco Crown has produced yet, with 500 gaming tables, more than 1,500 slot machines, a five-star hotel, shopping mall, and more.

Analysts at both Citigroup and Deutsche Bank have said that Studio City will be the "best situated" resort on the Cotai strip, as it will be directly adjacent to the Lotus Bridge that connects the strip to mainland China and on a proposed stop for the new intercity light rail coming next year.

Melco Crown is a great bet on mass-market revenue as well, which could be the future of Macau gaming growth as the VIP segment declines. Melco Crown derives more than two-thirds of its EBITDA from this segment and this trend should continue with its newest casino.

Melco Crown is the cheapest of the three based on its P/E multiple of 13. The current price in the low $30s looks like a bargain when compared with Deutsche Bank's price target of $55. Based on its already strong revenue growth and the exciting new casino Studio City on the way, now might be a good time for Foolish investors to play Melco Crown. However, as good as this company looks, here is one that looks even better.

1) Las Vegas Sands
While Wynn Resorts and Melco Crown offer compelling investment catalysts, Las Vegas Sands offers the most catalysts. With the most aggressive expansion on the Cotai strip, the best take on mass-market growth, the highest profit in the first quarter, and plenty of growth outside of Macau, Las Vegas Sands is your best bet. 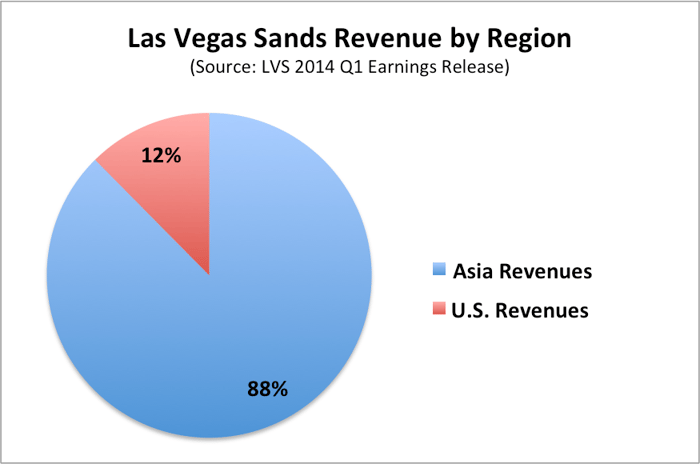 Las Vegas Sands knows a thing or two about Asian expansion, with 88% of it global revenue already coming from Asia.

Based on analyst estimates, Las Vegas Sands has 22% market share in Macau. The company's first-quarter 2014 revenue of a record $4.01 billion, up over 21% year over year, was also the highest in the industry. The company's huge bet on Macau paid off with nearly 50% EBITDA growth at its operations there.

At its current P/E multiple of 16, and a stock price of around $73 compared to a target in the high $90s, Las Vegas Sands could be very profitable for Foolish investors who are willing to make the bet now.

The coming Parisian resort on Cotai, the biggest of the coming casinos. Photo: Las Vegas Sands

Las Vegas Sands is preparing its own newest integrated casino resort, its third casino on the Cotai Strip, The Parisian, which will open in mid-2015. This resort will be the biggest of the new resorts put up by Wynn or Melco Crown with over 3,000 hotel rooms and suites, roughly 450 table games, 2,500 slots, a retail mall, and an impressive replica of the Eiffel Tower at 50% scale.

Foolish bottom line: Your best bet
With new properties on the Cotai strip, increased visitation, and quarter after quarter of rising revenue, plenty of reasons remain for bullishness on Macau even after the short-term distractions that have lowered prices lately. Both Wynn Resorts and Melco Crown offer interesting and worthy investment catalysts going forward. However, for Foolish investors who are looking for the top pick of the industry now, look at the massive growth opportunities coming from Las Vegas Sands. With its dominance in Cotai already, its impressive new coming resort, and its relatively cheap price, Sands is a winning bet now.