Wal-Mart Stores (NYSE:WMT) has more than 11,000 retail units around the world. Only 556 of those stores are located in Brazil, but Brazil falls into the BRIC category, which stands for Brazil, Russia, India, and China. These four countries have been seen as high-growth areas for many years. Some things have changed recently -- Russia's geopolitical issues and China's austerity measures immediately come to mind -- but the focus here is on Brazil. Despite only having 556 locations in Brazil, keep in mind that the World Cup and 2016 Olympics should lead to increased sales and brand exposure for Wal-Mart.

Recent initiative
In the first quarter in Brazil, net sales and comps sales (sales at stores opened at least one year) improved. This is a good sign. On the other hand, operating income declined due to investments in key initiatives and pricing.

In regard to the latter point, if you look at Wal-Mart's strategy around the world, you will find that pricing improvements are always mentioned. In other words, Wal-Mart wants to offer better values on its merchandise than its competitors offer. This, in turn, should drive traffic. The tricky part is that lowering prices often leads to margin contraction, which can then hinder the potential for profitable growth. Whether or not Wal-Mart can drive the operating margin faster than sales in Brazil remains to be seen.

Inorganic growth potential
The interesting thing about Brazil is that Wal-Mart doesn't have to compete with Target and Costco Wholesale (NASDAQ:COST) there. However, there were rumors that Costco would acquire PriceSmart (NASDAQ:PSMT).

Here's the catch: PriceSmart doesn't own any stores in Brazil. On the other hand, it's a membership warehouse like Costco, and it has more than 1 million cardholders in Central America and the Caribbean. At the moment, PriceSmart only has 33 warehouse clubs.

One reason why PriceSmart might be (and should be) appealing to a potential buyer is that it has consistently managed to grow revenue faster than selling, general, and administrative expenses -- a sign of efficient growth and margin expansion: 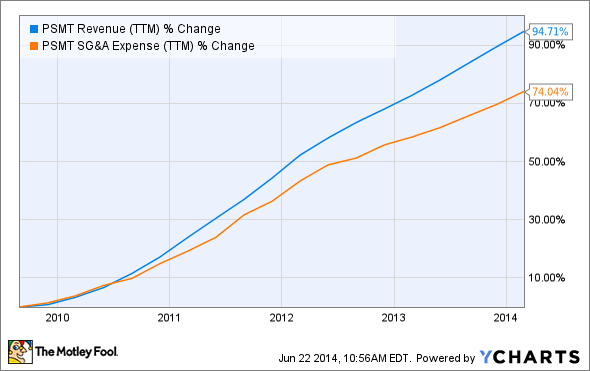 With PriceSmart performing well, still in its early growth stages, and having established a strong brand in Latin America, it's possible that Costco would step in, which could then provide an entrance into the Brazilian market. If this transpired (only speculation right now), the combined company would potentially steal share from Wal-Mart in Brazil. But ... you should never forget about Wal-Mart's strategic ways. It's possible that Wal-Mart would step in first, perhaps not for growth but to block potential future competition.

The Foolish conclusion
Brazil is just one piece of a much larger puzzle for Wal-Mart, but it's an important piece to the puzzle. Wal-Mart's success in Brazil is also an example of how the company maintains a competitive advantage throughout many parts of the world.

Wal-Mart will need its operating income to catch up to its sales growth, but this should be an achievable goal. It's easier to cut expenses related to low-growth areas in order to increase profitability than it is to grow sales.

Investors might want to take a serious look at Wal-Mart given its global dominance and maneuverability in the retail space. And if you're worried about online retailers, keep in mind that Wal-Mart is showing rampant online growth in most countries around the world.

How Is Wal-Mart Performing in Brazil, and Why Does It Matter? @themotleyfool #stocks $WMT $COST $PSMT Next Article
Current