Initial jobless claims fell 0.6% to 312,000 for the week ending June 21, according to a Labor Department report released today.

After falling a revised 1.3% the previous week, this newest report came in just above analysts' expectations for 310,000 new jobless claims. 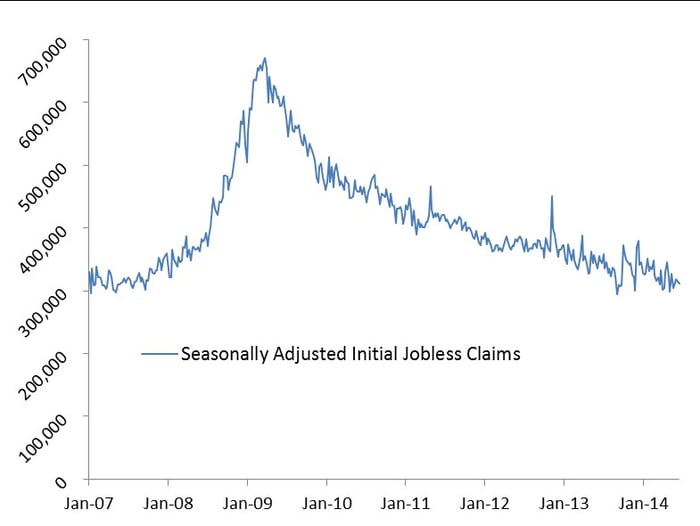 From a more long-term perspective, a 0.6% increase in the four-week moving average to 314,250 initial claims serves as another reminder that the labor market recovery has had its ups and downs. Still, both the latest week's claims and the four-week average fall significantly below 400,000, a cutoff point that economists consider a sign of an improving labor market. So far for 2014, weekly initial claims have clocked in at an average 323,100.

On a state-by-state basis, six states recorded a decrease of more than 1,000 initial claims for the week ending June 14 (most recent available data). Georgia claimed the top spot, citing fewer manufacturing administrative, and support services layoffs as the main reasons for its 2,250 initial claims decline.

For the same period, only Pennsylvania registered an increase of more than 1,000 initial claims. The state mentioned transportation, food services, educational services, and construction layoffs as the primary push behind its 7,120 claims jump.