2014 has been a rough year for many quick-service restaurant chains with significant coffee and breakfast businesses. Shares of Panera Bread (NASDAQ:PNRA), Dunkin Brands Group (NASDAQ:DNKN), and Tim Hortons (NYSE:THI.DL) have all been under pressure this year as bad weather negatively affected comparable-store sales growth at the beginning of the year. However, these pressures did not seem to impact Starbucks (NASDAQ:SBUX), which continues to generate consistent growth from a wide range of initiatives.

More than just coffee
In the restaurant industry, top-line growth derives from the combination of opening new locations and generating more revenue from existing locations. Starbucks is a leader in expanding its store count with over 20,000 stores, but it is not done expanding yet with approximately 1,500 new stores expected in fiscal 2014. Half of these new stores will be in the company's China/Asia Pacific segment, which illustrates the international strength of Starbucks' brand and operations.

In addition to the ongoing international growth story, Starbucks is investing in numerous growth opportunities that could drive future revenue growth from existing stores. Starbucks has steadily acquired businesses which it can integrate into the menu offerings of its 20,000 locations that include the La Boulange bakeries. Today, just one in three transactions at Starbucks includes food; the Boulange acquisition is one of several initiatives designed to "attach" food purchases to more transactions. Starbucks is also piloting lunch options as well as a selection of wine, beer, and shareable small plates to drive evening traffic. Starbucks designed all of its bakery, lunch, and evening initiatives to increase its revenue (and relevance) throughout the day.

Starbucks has also made meaningful investments into providing tea and juice options to customers. These investments were led by the acquisitions of Teavana and Evolution Fresh, both of which provide multi-channel growth opportunities in both company stores and third-party retailers. Starbucks has also further diversified its beverage offerings with innovative handcrafted sodas and other options that appeal to non-coffee drinkers.

In addition to menu expansion, Starbucks has also ramped up the growth of its highly successful digital payment and loyalty programs. Over a third of payments at Starbucks use a Starbucks card, and the company's reward program boasts 8 million active members. Mobile payments through Starbucks' smartphone app account for 14% of transactions and the growth continues. This investment in technology has earned Starbucks a multi-year lead over Panera's recent effort to leverage technology and loyalty programs with the rollout of Panera 2.0.

Once it completes its transformation, Starbucks will have transformed its store menu from the least diverse among its peers into a unique mix of premium products unmatched by any of the large national concepts. If successful, this menu expansion could make Starbucks a destination for full meals rather than the usual pit stop on the way to somewhere else.

Track record of strong growth and shareholder returns
Starbucks' multi-layered growth strategy has been rewarding shareholders in recent years, as its share price gains significantly exceed those of both its peer group and the S&P 500: 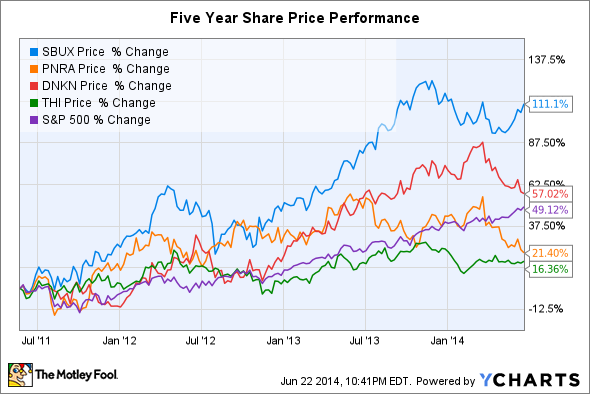 However, the proven ability to consistently grow earnings per share at 15% or more has resulted in Starbucks receiving a premium valuation above those of its peers:

Is it worth the premium? Starbucks simply has more clear paths to growth than the competition. The strength of Starbucks' international business is tremendous in comparison to that of Dunkin' Brands, which reported a net decline of 26 international Dunkin' Donuts locations in the most quarter. Meanwhile, Panera and Tim Hortons are limited to North America.

Foolish Takeaway
Starbucks is quickly making an impact in grocery stores with the sale of packaged coffee (including branded K-cups), Starbucks Refreshers, and even Oprah-branded Chai Tea. These initiatives, combined with the ongoing changes to Starbucks' menu offerings discussed above, outline a diverse set of growth drivers that leave little reason to doubt that Starbucks will continue to drive earnings-per-share growth of 15%. This strong growth outlook continues to make Starbucks a buy for long-term investors.