QR Energy (NYSE: QRE) currently pays its investors $0.1625 per month for each unit it owns. That works out to a pretty robust annual yield of more than 10.5%. As big as that payout is, it could be even bigger. Instead, QR Energy and peers like BreitBurn Energy Partners (OTC:BBEPQ) and Legacy Reserves (NASDAQ:LGCY) need to take some of the money they'd be paying out to investors and use it to combat the production decline rate.

Drilling down into the decline rate
QR Energy had a great chart in a recent investor presentation that details how it manages its decline rate. 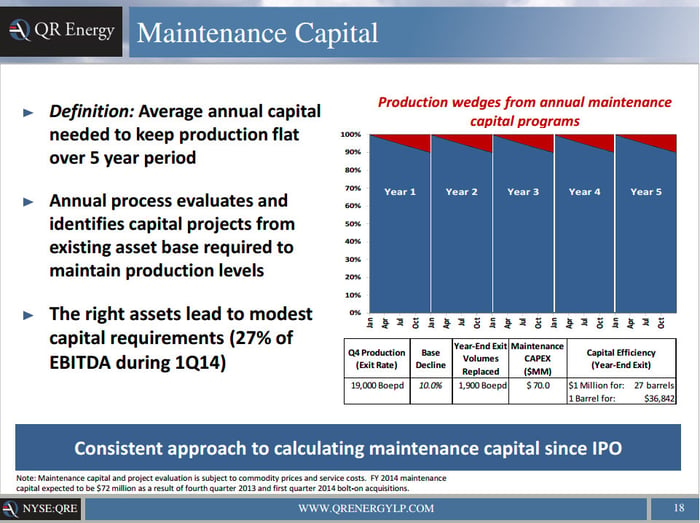 As that slide points out, the company is battling a 10% annual decline rate. What that means is that if left alone, production from the company's oil and gas wells would go from 19,000 barrels of oil equivalent per day, or BOE/d, at the start of the year to an exit rate of 17,100 BOE/d. By the end of the next year, production would be down to 15,390 BOE/d and would continue declining until the wells ran dry.

In order to combat this problem, QR Energy invests around $70 million per year to drill enough wells to top off its production rate and keep it around 19,000 BOE/D. However, that $70 million, which is a run rate of about 27% of its earnings, is money that could have been heading back into investors' pockets. Instead, it's being used to drill new wells just to maintain production.

Stopping the slide
While it's natural for the production of oil and gas wells to decline, there is something MLPs like QR Energy, BreitBurn Energy Partners, and Legacy Reserves can do, and that's buy better wells with lower decline rates. That's exactly what Legacy Reserves did earlier this year when it acquired non-operated, escalating working interests in natural gas wells in Wyoming. Take a look at the following slide, which overviews the company's now-closed deal. 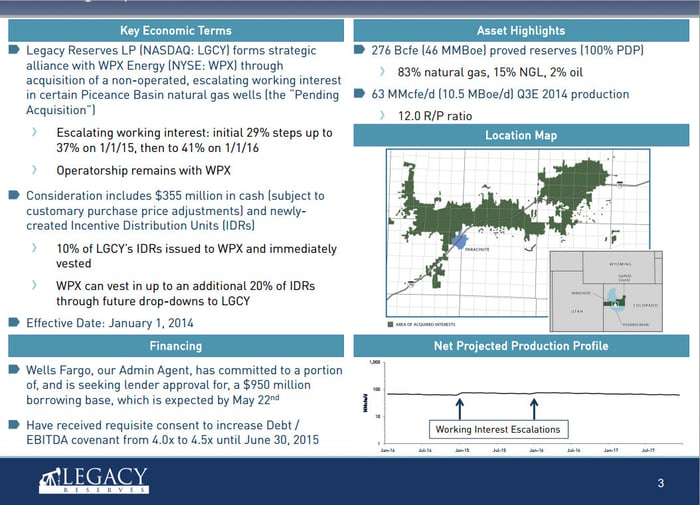 Likewise, when BreitBurn Energy Partners made its big oil deal last year, it noted that the company's expectation was that the asset would show little to no decline in production for the next decade. This is because it uses carbon dioxide to enhance the recovery of oil, which makes its decline rate much more stable than the rate of a conventional oil field. As a whole, we're seeing MLPs like BreitBurn Energy Partners, Legacy Reserves, and others being drawn to carbon dioxide enhanced oil recovery projects, because the ultra-low decline rates from these assets make it easier to maintain production levels.

Investor takeaway
While the distributions paid out by upstream MLPs like QR Energy, Legacy Reserves, and BreitBurn Energy Partners are big, all three payouts could be even bigger. We can blame the decline rate for that, as it's working against investors as it forces producers to spend money to maintain production. It's a problem that will never go away, though it can be muted by acquiring wells with lower decline rates.