David Kretzmann
(TMFPencils)
Author Bio
David started investing in stocks when he was 12 years old and has been a Fool ever since. He is a graduate of Berea College as well as the Motley Fool's Analyst Development Program, currently serving as an analyst in Rule Breakers and Supernova. Follow David on Twitter @David_Kretzmann.

MarketAxess (NASDAQ:MKTX) is a little known business -- less than 100 players on Motley Fool CAPS have rated the stock -- but this is a company well worth watching.

MarketAxess provides an electronic trading platform for fixed-income securities (such as corporate bonds and other credit instruments), helping institutional investors participate more efficiently in the global credit market. In other words, it offers a platform for institutions (and, perhaps someday, individual investors) to invest in bonds and other fixed-income securities around the world.

Here are five reasons to add MarketAxess to your watchlist and keep an eye on the company's progress in the months and years ahead.

1. A growing market
Total high grade corporate debt outstanding has increased more than 60% since 2008. MarketAxess' platform helps connect institutional investors with the secondary debt market, and as of the first quarter of 2014 approximately 13.4% of high grade bond trades in the U.S. were done through MarketAxess.

In addition to the Americas, MarketAxess is also expanding in Europe and the Asia-Pacific region. In the first quarter of 2014, trade volumes from MarketAxess' European clients increased 36% year-over-year. Europe now accounts for 20% of the company's overall revenue.

Credit trading is a highly regulated niche market, providing a competitive moat for MarketAxess as the company opens investors to a liquid worldwide credit market. Since 2008, MarketAxess has gained approval to extend its electronic trading platform to Quebec, Brazil, Singapore, and Hong Kong.

2. Consistent sales growth... and (probably) more to come
MarketAxess has grown sales at an average annual rate of 13.04% over the past four years to $238.73 million in fiscal 2013. This growth seems poised to continue, considering the rising issuance of corporate debt and MarketAxess' expanding global credit trading platform.

4. Experienced leadership
Richard McVey helped found MarketAxess in 2000 and continues to serve as chairman and CEO today. McVey owns 1.15 million shares of the business -- more than 3% of all shares outstanding -- which helps give me assurance that his interests are aligned with shareholders. CFO Antonio DeLise has been with MarketAxess since 2006, and chief information officer Nicholas Themelis has served the company since 2004.

This experienced and innovative leadership team has helped MarketAxess grow to serve more than 1,400 institutional investing firms around the world today.

Foolish bottom line
MarketAxess is still a somewhat small business in the public sphere with a market cap of $2.1 billion as of this writing. The stock trades at a P/E ratio of 27, which is not obscene for a small-cap business producing steady cash flow while growing on a global scale. As you can see in the chart below, strong earnings growth has helped the P/E ratio stay relatively steady even with the stock doubling over the past two years. 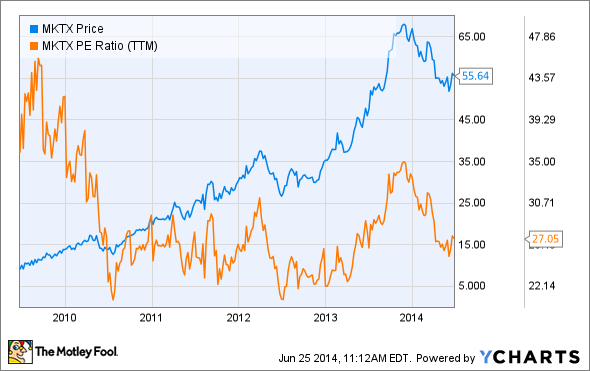 The stock will be volatile in the short-term, but I think patient investors will enjoy market-beating returns over the long haul with MarketAxess. I haven't made a real-money investment in the company (yet), but I did rate the stock an outperform on CAPS.

Do you think MarketAxess will outperform the S&P 500 in the coming years? Head over to CAPS and make your pitch!