Stock indexes are mixed today, and the Dow Jones Industrial Average (DJINDICES:^DJI) has fallen 0.1% in large part because of a big drop from DuPont (NYSE:DD). I'll get to that in a minute, but first there is notable progress in consumer confidence, which could keep markets pushing higher this year.

The University of Michigan and Thomson Reuters said today their consumer confidence reading hit 82.5 in June; May's final reading was 81.9. That means confidence is nearly back to where it was before the recession and consumers are likely to tick up spending in the second half of the year.

Why DuPont lagged the Dow
Confidence may be up, but DuPont's stock is down nearly 4% in late trading after the company issued a profit warning. Management said that poor performance in the company's agriculture business will result in a slight decline in second-quarter earnings from $1.28 per share a year ago.

While profit warnings are never good for a stock, I think there are reasonable explanations for the performance from DuPont. The company has seen lower than expected demand for corn products as farmers shift to soybeans this year. Pesticides typically used early in the planting season were also hurt by the bad weather that plagued the country earlier this year. That resulted in not only weaker than expected demand, but also higher seed inventory writedowns.

This is one time where it's important to keep the long-term perspective in mind, particularly for a company like DuPont. You can see below that revenue has slowly climbed over the past decade, and earnings and dividends have both increased as well. 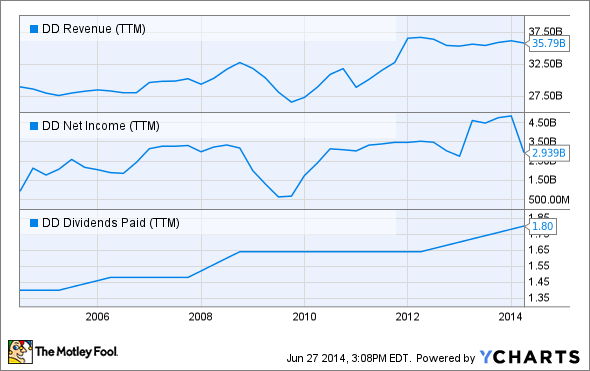 Long term, DuPont is still a strong chemical and agriculture company; this profit warning does nothing to change that picture. Demand for agriculture products can be volatile year to year, so investors should expect ups and downs in the stock. But the company is still highly profitable and has now paid a dividend for 439 consecutive quarters.

The lower price actually makes for an attractive buying point for investors looking for a great dividend. The yield is up to 2.6%, and if the corn market improves next year profits should be on track to grow again. But a long-term lens is needed and that's tough to do in a market focused on very short-term news.

DuPont Falls, But It's Not Time to Sell @themotleyfool #stocks $^DJI $DD Next Article
Current