Facebook (NASDAQ:FB) has become one the top two Internet ad sellers, taking in 7.4% of net U.S. digital ad dollars, or $3.17 billion, according to eMarketer. That stands behind only Google (NASDAQ:GOOG), which accounts for $17 billion -- nearly half -- of all ad buys.

One of the ways Facebook is building an online ad empire is forcing businesses to pay for reach. In the early days of the service, all posts were treated mostly the same. If a company had millions of followers, it could theoretically reach them all just by posting. That's no longer true, as Facebook now throttles posts. Throttling means that only a small percentage of people following a commercial entity will see what it adds to its feed. If a company wants more of its followers to see a post, it must pay for the privilege.

The strategy has paid off for the social media network. But if it pushes things too far, companies and users may find other ways to communicate. If you have to go outside your news feed to receive updates from companies you follow, at some point it might make sense to interact with the brand on another platform or through its dedicated website.

If Facebook throttles posts heavily -- which it does -- it risks making a company's Facebook presence less valuable.

What are the risks?
The social media giant is walking a tightrope with major companies. If Facebook throttles too little, there is no need for a company to pay to "boost" a post. If it throttles too much, a company may decide there is no value in posting on Facebook at all. The social media giant has to maintain a balance where posts have just enough organic, non-boosted engagement to make it appealing for a brand to see what would happen if it spends a few dollars.

Throttling has caused the organic reach of posts to fall, sending engagement per post spiraling.

The world's top brands on Facebook saw engagement plummet over the past 12 months, according to data recently published by social media analytics firm Simply Measured. 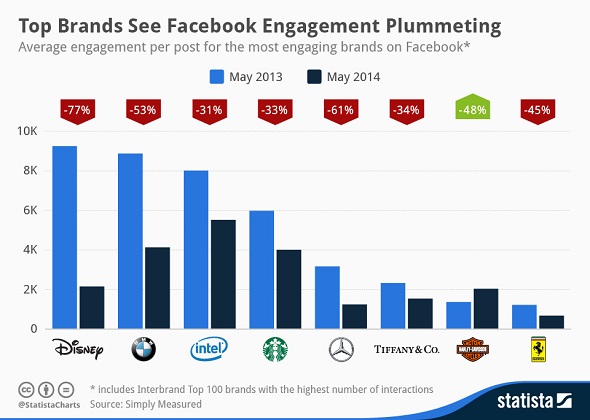 Throttling has meant that fewer people see each post -- no matter how many followers a company has -- so lower engagement is to be expected.

This forces companies to either accept that posts will reach significantly fewer people or pay for the broader access that comes with boosting a post. The practice may be working, but it undermines the free flow of data that many consumers assume they are getting on the platform. If another platform emerges that allows brands and fans to interact more organically without money being so blatantly involved, that company may steal away Facebook users.

Facebook is moving forward
Facebook has been clear that it does not intend to dial back its throttling. The company is likely to increase it so that business posts have almost no organic reach.

"Increasingly Facebook is saying that you should assume a day will come when the organic reach is zero," EAME managing director Marshall Manson told AdAge.

Facebook has told companies to view followers as a way to make paid advertising more effective -- as opposed to a free distribution channel.

"Advertisers should think of fans as a means to an end, not as the end in themselves," said Facebook spokesman Brandon McCormick. "The end should be business results."

A balance of organic and paid reach makes sense. If Facebook decides that it has no interest in giving companies access to their fans for free, then those businesses may decide that it's not worth building or maintaining a presence on the site. It might not directly cost anything to be on Facebook, but using the platform and building a fan base takes time, which costs money. If that expenditure does not pay off, then it removes a major reason a brand would be on Facebook in the first place.

Throttling forces companies to pay
Facebook throttles brand pages in a way that penalizes bigger companies, as those are the ones more likely to have the money to pay.

Facebook page impressions have dropped by more than half for many brands. Advertising agency 41? 29! conducted organic-reach analysis and found that it seems to be related to the number of fans a page has. It reported the following statistics for September 2013:

How will this play out?
In some ways, Facebook is the only game in town. The company has more than a billion users, so businesses feel they have to be there, even if actually reaching customers costs money. That can change -- the history of the Internet has shown that a new social media phenomenon can sprout up practically overnight.

In limiting access to companies users have chosen to follow, Facebook risks sending some of its billion users looking for alternatives. In removing the free benefits of maintaining a Facebook presence for companies, the social media giant risks their departure.

Newspapers, radio, and television all once had the same only-game-in-town mentality that Facebook is showing now. All were once powerful. Now, newspapers are struggling to survive, radio is not much better off, and TV is much less powerful than it once was.

There is a balance where Facebook can have its cake and eat it, too. But if the company does not ratchet down its throttling, it may see its ad revenue follow the path that newspapers, radio, and television traveled before it.