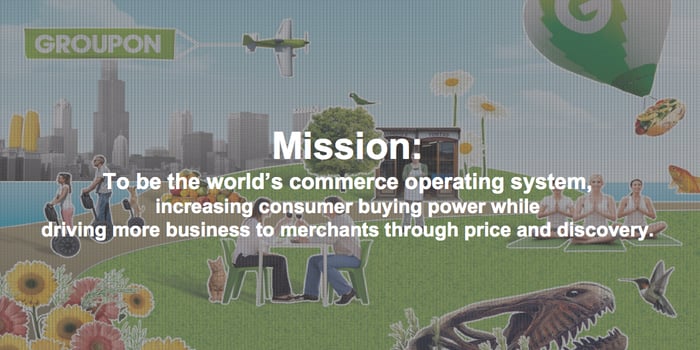 Groupon (NASDAQ:GRPN) has fallen by nearly 40% during the first half of 2014, as the company is going through many changes. This is creating uncertainty among investors. Although sales are moving in the right direction, it won't be easy for Groupon to increase profitability while competing against industry powerhouses such as Amazon.com (NASDAQ:AMZN) and eBay (NASDAQ:EBAY).

Going through a transformation
Groupon has been facing considerable challenges lately. Growing competition and market saturation in its traditional deals business have negatively affected performance, so the company is implementing a series of initiatives to turn the business around and better adapt to industry trends.

Groupon is expanding into e-commerce and diversifying its operations via acquisitions, such as South Korean e-commerce marketplace Ticket Monster and U.S. fashion site Ideeli. In addition, the company is increasingly focusing on mobile and local deals to improve the customer experience.

Groupon is trying to change its relationship with consumers. The company wants to be seen as a full marketplace that can be accessed anywhere, anytime. Groupon wants customers to go to the platform in search of opportunities -- management refers to this as the "pull" business model -- versus the old "push" approach of sending daily deals to consumers via email.

The strategy makes sense as a way to strengthen the company's competitive position and build a more sound relationship with customers. However, Groupon still needs to prove that it can execute successfully while facing tough competitive pressure from bigger and more powerful players such as Amazon and eBay.

Growing sales, falling margins
Although revenues are growing nicely, profit margins remain depressed, and this represents a key source of uncertainty for investors.

Sales during the first quarter of 2014 grew 26%, to $757.6 million. North American sales increased 27%, sales in the EMEA region increased 26%, and revenues in the rest of the world expanded by 23% versus the same period in the prior year.

Gross billings increased 29% to $1.82 billion. Active customers grew 24% year over year to 51.8 million, and mobile transactions represented a big 54% of total transactions during the period.

All in all, the company is doing well when it comes to increasing sales and gaining traction among customers. However, profit margins are under heavy pressure, and Groupon reported a net loss of $37.8 million during the quarter.

Management is planning to increase profitability during the coming quarters. In a sign of confidence, Groupon increased its earnings guidance for the rest of the year.

For 2014, we have three primary objectives. First is to reaccelerate our local growth in North America and abroad. Second is to improve the gross margins and operating efficiency of our Goods business. And third is to continue to achieve stability in our international operations and reduce our losses in Rest of World so that every region in which we operate is generating positive segment operating income by year end, excluding any impact from acquisitions. We believe we are on course to achieve all three objectives by the end of 2014 and have raised our full-year guidance accordingly.

Groupon vs. Amazon and eBay
Although it's encouraging to see Groupon making progress in key areas, investors need to consider that the company is facing huge competitive challenges from Amazon and eBay, among others.

Amazon is the undisputed leader in online retail, and the company has a relentless innovative drive that makes it a dreaded competitor in the business. Amazon sells its products for aggressively low prices in order to gain market share, even at the expense of profit margins. In the words of Jeff Bezos: "Your margin is my opportunity."

Amazon produced sales of $19.74 billion during the first quarter in 2014, a big increase of 23% versus the same quarter in the prior year. This level of performance is quite extraordinary for a company of Amazon's size, and it shows that the company is being quite successful in its attempts to dominate the industry.

eBay has a different business model. The company is an e-commerce platform, as opposed to a retailer. But eBay has consolidated a solid position in its segment. The marketplace division produced revenues of $2.2 billion in the first quarter of 2014, growing 12% versus the same period in the prior year. In addition, PayPal represents an enormously valuable strategic asset for eBay.

Foolish takeaway
Groupon is going through a profound transformation as the company intends to better adapt to industry trends and gain competitive strengths. Many of the company's initiatives make a lot of sense. Sales growth is quite encouraging, and management is optimistic regarding the prospects for improved profitability in the medium term.

However, competing against industry juggernauts such as Amazon and eBay is not easy at all. Groupon is moving in the right direction, but the company is not out of the woods yet.