LINN Energy and LinnCo are acquiring assets in five operating regions. As the map in the following investor slide shows, most of these assets overlap with LINN Energy operating areas. 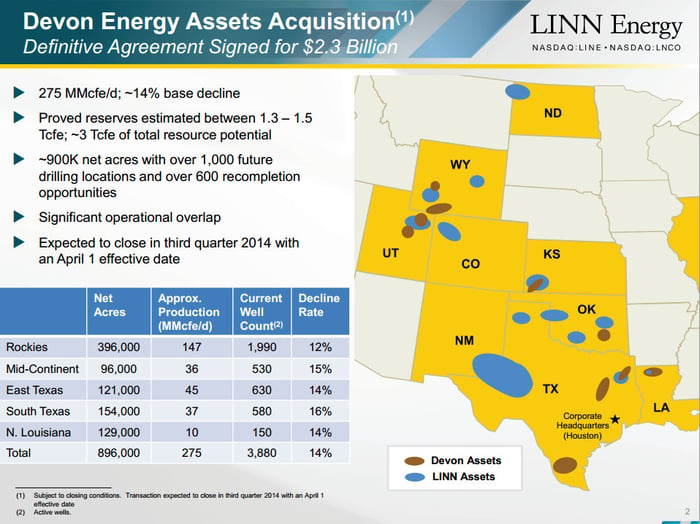 LINN Energy is acquiring more than 3,800 producing oil and gas wells from Devon Energy. Those wells today produce 275 MMcfe/d, of which about 80% is natural gas. The company also sees the potential for 1,000 future drilling locations on the acquired acreage. The current decline rate of these assets is about 14%. While that rate is a little on the high side, it's not nearly as high as the assets LINN Energy plans to sell to pay for the Devon Energy assets.

Wave goodbye to the Granite Wash
LINN Energy and LinnCo also announced plans to monetize the Granite Wash and Cleveland plays in the Texas Panhandle and Western Oklahoma. This really isn't a surprise as LINN and LinnCo had already hinted that their position in the Mid-Continent would likely be traded next. However, instead of an outright trade with another operator, LINN Energy is first buying assets, in this case from Devon Energy, and will use the proceeds from a future sale as part of a "like-kind exchange" to pay for the Devon Energy deal.

This position produces 230 MMcfe/d of liquids-rich natural gas, which LINN Energy has grown from 65 MMcfe/d by horizontally drilling 17 different intervals since 2010. LINN Energy had used this position as the growth driver of its portfolio, but it has found the decline rate of these assets were a struggle to overcome. The company constantly needed to invest capital into the play just to maintain the production rate, which has been cutting into the its distributable cash flow. It's a problem that investors in upsteam MLPs like LINN Energy are increasingly becoming aware of as the culprit in constrained distribution growth.

This is why we have seen LINN Energy make a strategic shift away from higher-decline horizontal properties. In fact, one of the strategic rationales behind the LinnCo-led acquisition of Berry Petroleum's oil-rich assets last year was to free up LINN Energy from relying on the Granite Wash to supply growth. The deal allowed the company to shift its capital spending away from the Granite Wash and into the newly acquired assets' lower-decline oil properties. That acquisition, along with the others LINN Energy has completed over the past few months, enables the company to cash in on the value it created from its position in the Granite Wash as it no long needs its high-decline headaches.

Investor takeaway
LINN Energy continues to take steps in the right direction to lower its decline rate and strengthen its distribution. Through its deal with Devon Energy, the company is acquiring lower-declining natural-gas properties to replace fairly high-decline liquids-rich assets in the Granite Wash. This move makes a lot of sense for the company as it repositions its portfolio to so that it can finally start to grow its distribution again.