For all the hype about the record highs the Dow Jones Industrials (DJINDICES:^DJI) have reached lately, the Dow has achieved only lackluster performance during the first six months of the year. Coming into the last day of the quarter Monday, the Dow had managed to post gains of less than 2% -- a big letdown from the better-than-26% gains that the averaged produced throughout all of 2013. The big question Dow investors are asking now is whether the Dow can accelerate its ascent during the remainder of 2014 or whether this year will prove to be the end of the stock market's impressive five-year run of gains.

A big part of the answer will depend on how the economy behaves both in the U.S. and around the world, and although all 30 of the Dow stocks feel the influence of economic conditions, Caterpillar (NYSE:CAT) and United Technologies (NYSE:RTX) could prove especially sensitive to the direction of the global economy in the remainder of 2014. 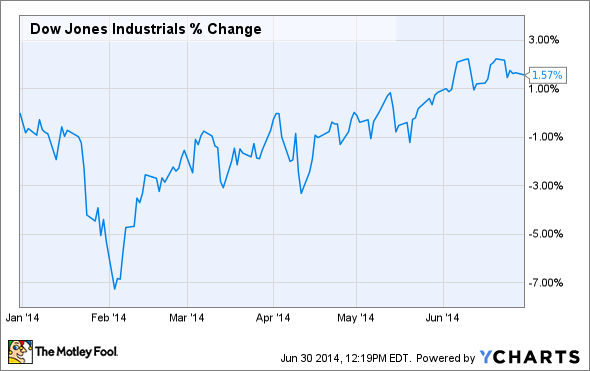 From an economic standpoint, the first part of 2014 was everything Dow investors didn't want to see. A sluggish holiday season led to countless earnings warnings among retail stocks near the beginning of the year, and a harsh winter season carried well into spring and put a damper on the first-quarter earnings season as well. U.S. gross domestic product plunged 2.9%, a decline that ordinarily would signal imminent recessionary conditions ahead.

On the other side of the coin, though, investors remain confident about the future of the Dow Jones Industrials. Coming into second-quarter earnings season, which starts in earnest next week, analysts have followed their typical pattern of reducing their expectations for aggregate earnings, but according to figures from FactSet Research, the decline this season is the smallest in more than three years, with just a 1.5% drop in earnings-per-share figures for the S&P 500. Expected growth of 5.1% for the second quarter certainly isn't huge, but forward estimates of earnings have roughly doubled the early-2009 Dow lows.

Clearly, investors believe that the first-quarter weakness in the economy will prove short-lived. But lately, some economists haven't seemed as confident. In the past month, several major financial institutions have started lowering their views from the 3.5% to 4% range to as low as 2.5%. That means that for overall expectations of roughly 2% growth for the year, the economy would have to grow at about a 4% pace in order to catch up with what could be merely break-even results from the first half.

How the Dow will respond
The problem for Dow investors is that investors have largely already assumed that economic growth would pick up steam both in the U.S. and around the world. Caterpillar has traded at levels not seen in more than two years, as shareholders count on the heavy-equipment giant coming out of its tailspin from the plunge in mining-equipment sales. But those positive projections rely at least in part on stronger economic conditions both in the U.S. and in key foreign markets including China and Europe. If U.S. weakness spreads across the globe, it could spell trouble for Caterpillar's revenue and earnings rebound.

At this point, the Dow appears to be counting on a solid economic bounce from a weak first quarter. The Dow could keep climbing if that turns out to be the case, but anything short of a solid comeback could leave the Dow struggling to avoid its first losing year since 2008.

Where's the Dow Headed in the Second Half of 2014? @themotleyfool #stocks $RTX $CAT $^DJI Next Article
Current