If you could give the first quarter of 2014 a tag line, it would surely be the ominous mantra of Game of Thrones' Stark clan: "Winter is coming." It began in April with advance reports of just 0.1% U.S. GDP growth in the first quarter, which was blamed on a terrible winter that held much of the country in its grip throughout 2014's first months. That Bureau of Economic Analysis (BEA) estimate in May was revised down past the red line to show a 1% contraction, a fix again blamed on weather-related weakness.

Now, with its final revision released today, the BEA has produced something nearly as shocking as the Stark-slaughtering Red Wedding that capped Game of Thrones' gory third season: first-quarter GDP contracted at a shocking 2.9% rate, well into depths that tend to signal recession and well below any previous nonrecessionary declines in nearly 70 years of tracking: 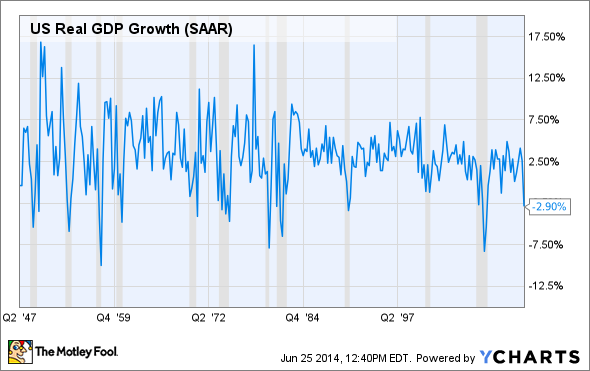 The American economy has fallen into recession 11 times since quarterly GDP tracking began in 1947, and it has posted 42 quarterly year-over-year GDP contractions during that time. Seven of those quarterly contractions were not part of or immediately preceding a recession, but only 16 of the remaining 35 quarterly contractions produced larger declines than that seen in 2014's first quarter. In fact, we have to go back to 1956 to find a nonrecessionary GDP decline remotely comparable to this one, and even that isolated 1.5% contraction -- a year and a half before the modest recession of 1957 -- barely produced half the economic shrinkage the BEA saw from January through March of this year. 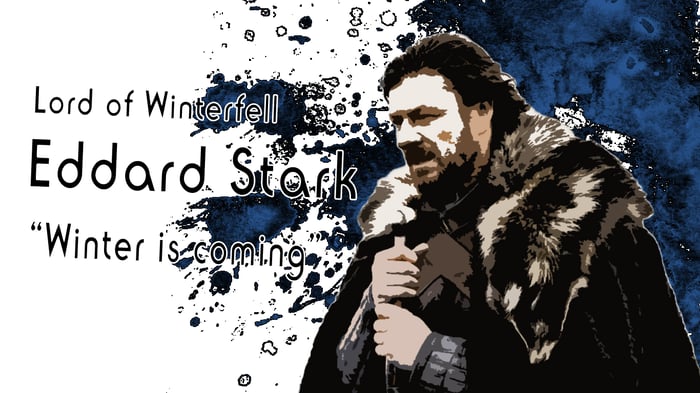 A decline of this magnitude, without a resultant recession, would be unprecedented in seven decades of data. And yet it has somehow also become least important economic contraction in seven decades of data. The Dow Jones Industrial Average (DJINDICES:^DJI) has been positive all day! The index closed at a 0.3% gain, which lags broader indices -- the S&P 500 (SNPINDEX:^GSPC) was up 0.5% and the tech-heavy Nasdaq Composite (NASDAQINDEX:^IXIC) surged throughout the day to close at a 0.7% gain -- but it's still undoubtedly surprising to the legion of bearish market-watchers who have long waited for such a moment of truth to send stocks tumbling. These strange gains are happening despite the fact that this was not only the worst nonrecessionary quarterly contraction in history, but it was also the largest revision from an advance to a final estimate (and from a second to a final estimate) in the three-decade history of the BEA's current three-estimate system.

Does this shrinkage, like Game of Thrones' Red Wedding, signal a turning point from which the economy (like the Starks) won't recover? Market-watchers clearly don't believe so, even though the final revision crashed through many economists' already-miserable consensus call for a 1.8% decline. Unlike the winters of Westeros, American winters don't last for years. With winter long behind us, forward GDP estimates for the second quarter, along with more recent economic data, now support the notion that the economy is not headed for recession. Among the past month's data points were a number of new high-water marks:

Other metrics support the pro-growth crowd -- according to the Council of Economic Advisers, data for aggregate hours worked and for manufacturing output would have ordinarily resulted in a GDP gain of 2% to 2.5% during the first quarter, and the discrepancy between these figures is so large that it produced a downside error only seen in roughly 2% of predictions. Weather-related arguments also found support in the sharp rebound in auto sales, core retail sales, and average weekly hours worked from January to March. In addition, the Council of Economic Advisers pointed to record-high growth in utilities' expenses during the first quarter, which strongly indicates an abnormally large number of homebound Americans trying to fend off one of the most miserable chills in recent memory.

However, if we want to be sure that this GDP collapse is merely an aberration and not an accurate representation of an economy in tailspin, it helps to understand why the BEA revised its estimates so much lower from the first to the final update.

In this final estimate, just as with the first report released two months ago, health-care spending proved to be a difference maker. The first estimate saw 10% year-over-year growth in health-care spending, and as a result that sector of the economy was worth more than 1% of GDP growth for the first time in recorded history. Since the headline GDP growth figure was only 0.1%, you can see why it was initially thought that the Obamacare rollout was responsible for keeping the economy afloat. The BEA's advance estimate showed health-care spending adding $43 billion to an economy that only grew by $4 billion in overall real terms in the first quarter. In the BEA's final estimate, health-care spending shrank by $6 billion in the first quarter. This one change accounted for 40% of the entire swing from a narrowly positive GDP growth rate to the worst nonrecessionary growth rate on record. Much of the remainder of the drop from advance to final estimate came from an explosion in private inventory levels, which nearly tripled in size as the BEA gathered more complete data.

The surge in inventories has a weather-related explanation -- if no one wants to shop, finished products will sit unsold. The health-care switcheroo is more complicated, but the Council of Economic Advisers pointed out that the BEA's data for this sector was not considered truly "current" until the survey used to track health-care spending reported its first-quarter estimate just this month. The fact that Obamacare is today in full effect further complicates any analysis, and the Council now expects health-care spending to accelerate in the second quarter and beyond. This could very well have the effect of pushing forward the expected economic impact of millions of newly insured Americans receiving much-needed and possibly long-overdue health-care services.

This GDP report, as with many other economic reports of the post-financial-crisis era, has been confusing and contradictory. For now, the market has ignored it, preferring to believe instead that a raft of other data more accurately indicates an economy on the mend. On the plus side, we probably won't have to wait another year to find out if there are worse things than winter coming to wreak havoc on the American economy.