"Just when I thought I was out ... they pull me back in." -- Michael Corleone, The Godfather: Part III.

The American economy, like Michael Corleone, keeps getting pulled back down to mediocrity every time it seems ready to reach escape velocity. The latest GDP update from the Bureau of Economic Analysis is another sign of this frustrating process. Its final figure for the last quarter of 2013 showed a strong 2.6% annualized growth rate last month, but the BEA's first estimate of 2014's first-quarter GDP displayed anemic 0.1% growth. This is far weaker than the 1.2% growth many economists had expected, and it marks the third time since 2011 that first-quarter GDP growth has slipped below a 1% annualized rate. When you break down the major components of American GDP, it's easy to see why: 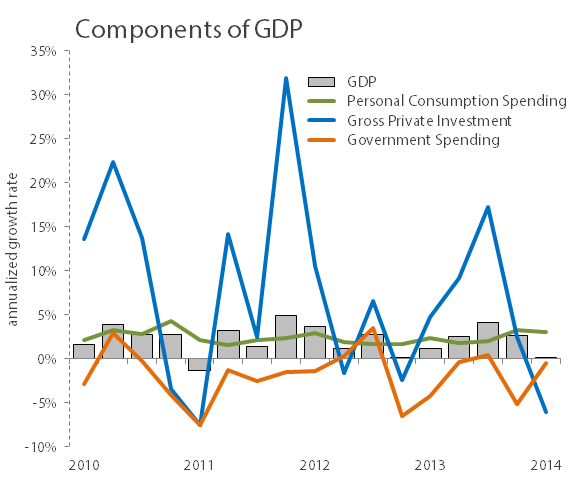 A decline in the rate of private investment has been the cause of every particularly weak GDP print in the past five years. In some quarters, one part or another part of the investment pie has been the culprit, but this quarter saw weakness across the entire investment landscape: 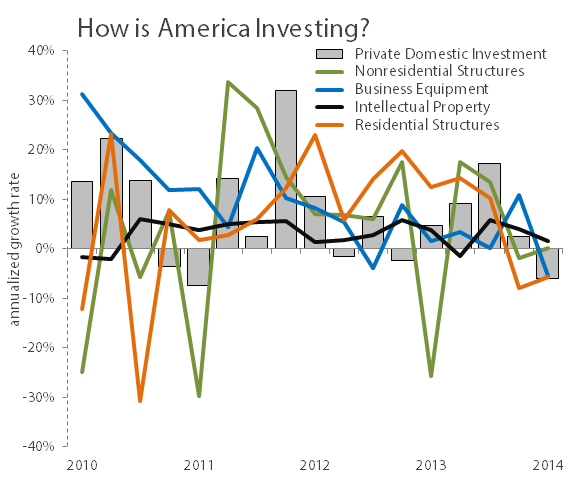 The only aspect of American investment to maintain real positive momentum was intellectual property, which encompasses research and development spending, as well as the creation of various entertainment offerings such as books, music, and film. New home construction, represented by residential structures in the chart above, declined for a second straight quarter, which hasn't happened since the recession ended in 2009. Business-related construction was barely in positive territory, and capital expenditures on equipment also reached the lowest level since the end of the recession in 2009. All in all, it was a really lousy quarter for American investments.

American markets, however, have proven largely indifferent to this apparent economic weakness. The Dow Jones Industrial Average (DJINDICES:^DJI) was up 24 points at 1:15 p.m. EDT, despite the fact that investors in Dow housing representative Home Depot (NYSE:HD) have taken today's weak homebuilding news hard and have made its shares among the worst of the 30 blue-chip components today. There are a few reasons why, and they extend beyond the fact that today's GDP data is only an initial release that will wind up being revised several times before it becomes set in stone. 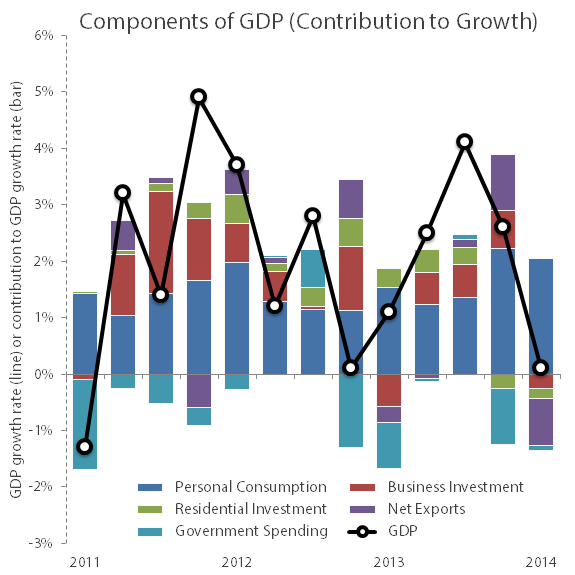 This comes despite a slowdown in Americans' spending on goods, because one part of U.S. spending has surged to its strongest growth rate in 14 years. The last time American spending on services grew so rapidly -- it increased at a 4.4% annualized clip in the first quarter -- was in 2000's second quarter: 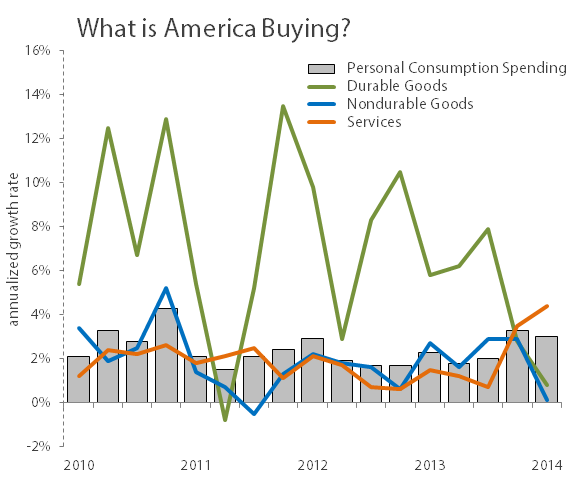 Here's where things get interesting. Spending on services encompasses a number of sectors, including housing expenses, dining out, investment and insurance services, and general leisure time. However, the BEA data makes it abundantly clear that health care, above all, drove Americans' increased spending on services in the first quarter: 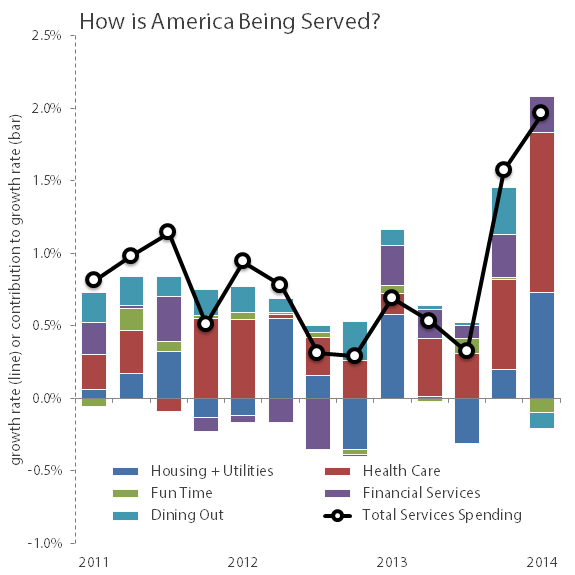 Health-care spending grew 10% year over year and accounted for over 1% of total economic growth (in terms of the headline GDP growth rate, not in terms of a 100% share) for the first time in history. The BEA data on health-care spending growth as a share of total GDP growth dates back to 1959, and until this quarter it had never contributed more than 0.8% of overall economic growth: 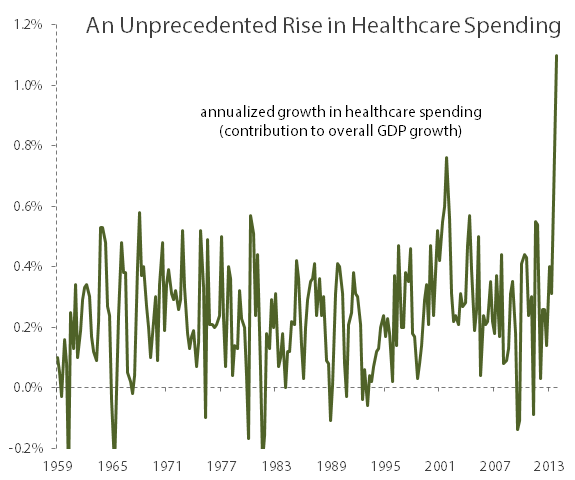 This is clearly related to the Obamacare rollout that ramped up in the first quarter. Bureau of Economic Analysis representatives noted that this growth was related to Obamacare's implementation, but economist Jared Bernstein believes that it's more likely that this rise is related to Medicaid expansion. This is a rather dubious claim in light of the fact that health-care spending in the mid-1960s -- when Medicaid was created -- never produced more than 0.6% growth in the overall economy. Economist Ian Shepherdson also noted that if health-care spending had remained flat, the headline GDP number would have showed a 1% decline in the economy.

This surge has not yet been reflected in Dow health-care components UnitedHealth (NYSE:UNH), Merck, Johnson & Johnson, and Pfizer, as all four were trading lower in early afternoon. A rise in health-care spending need not translate to the bottom line of these companies, as Obamacare's efforts to control costs have already hurt major insurers, as evidenced in UnitedHealth's weak first-quarter earnings.

Some health-care companies are bound to profit handsomely from Obamacare, but it's likely to be those with innovative new treatments that have only recently become insured under the program, not slow-and-steady giants grappling with new mandates. Spending on physician services has also exploded since the Obamacare rollout began last year, and this is the sort of health-care expense that's not likely to be fully captured on the earnings statements of most publicly traded health-care companies.

This GDP report is hardly an indicator of an economy moving in the right direction. Obamacare is meant to control health-care spending, not send it through the roof, and an economy can't thrive if its growth is being driven by unhealthy people trying to get well. We're likely to see this figure decline over the rest of the year, and it should. However, if health-care spending remains elevated, it could be a major sign that Obamacare is not having its desired effect, and it could also further unsettle an economy with a larger health-care sector than that of any other developed nation in the world. Let's hope that America can put its weather woes behind it and that the quarter's weakness is only a short-term problem, rather than an early warning sign of economic wobbles.