Please ensure Javascript is enabled for purposes of website accessibility
Log In Help Join The Motley Fool
Free Article Join Over 1 Million Premium Members And Get More In-Depth Stock Guidance and Research
By Jessica Alling - Jul 1, 2014 at 9:03AM

As a payment processor, Visa reigns supreme -- but it's not charging the king's ransom it could demand, which could prove foolish in the future.

The numbers all say one thing: Visa (V -0.75%) is the king of payment processors. Yet, the company continues to ignore one huge opportunity it has to boost revenue. And with its dominance likely to lessen in the years to come, the window of opportunity may not be around for long.

The lion's share
There's one factor above all others that determines the success of a payment processor: transactions volume. Worldwide, Visa far outpaces rivals MasterCard (MA -1.31%) and American Express (AXP 0.19%) with 38% of all card transactions in 2013 -- 168.9 billion in total -- being executed with Visa debit cards. Visa's credit cards account for a further 22% of transactions. 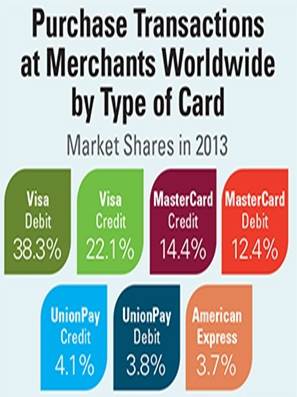 Being the biggest force in the market is a great advantage; but if Visa doesn't press the issue with merchants, it could lose out on some serious revenue growth.

Upping the ante
With 60% of the world's transactions in its pockets, it's curious that Visa still charges merchants similar rates to those charged by MasterCard, and below those paid for access to American Express's premium clientele.

Though terms vary by merchant agreement, both Visa and MasterCard charge close to 2% per transaction, with the weighted average for both companies registering at 2.17% for 2013. American Express, on the other hand, can thank its focus on higher-income demographics for the ability to charge closer to 3% per transaction.

There's no doubt that, with the number of transactions completed each year through Visa's platform, the firm is capable of generating a huge amount of revenue -- far beyond that of its competitors -- without charging merchants more. 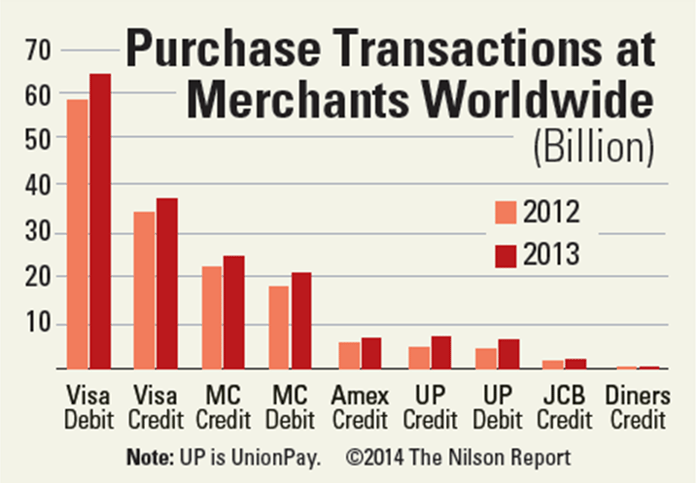 But the sheer size of Visa's market share should be incentive for charging a premium to merchants above its current rates. Even with 10% growth in transactions versus the first quarter of 2013, boosting its going rates wouldn't mean Visa was greedily grasping for higher revenues; it could be a pre-emptive strike on declines in the future.

Growing market, shrinking market share
On one hand, a prediction for huge growth in card transactions during the next few years is already materializing, giving payment processors plenty of growth opportunities. During the first quarter of 2014, credit card spending grew 8.5% in the U.S. alone. But that's child's play next to the entire market's estimated growth during the next few years.

By 2018, the total number of transactions worldwide are expected to increase to 289 billion -- a 41% jump -- according to the Nilson Report. Yet, at the same time, the Report's analysts expect both Visa and MasterCard to lose market share.

Unfortunately for Visa shareholders, the company has already had a peek at the market-share slide that's predicted for the company in the near future. Compared to 2012, Visa's market share fell by 3%, while MasterCard was flat, and American Express was down 5%. The picture for 2018 is a bit more dramatic: 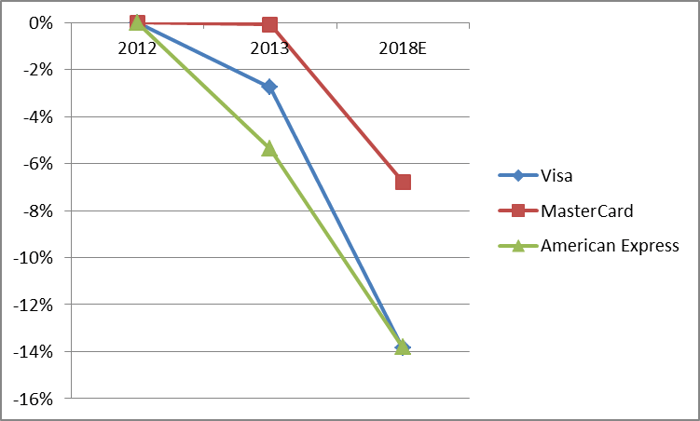 The picture is much sunnier for UnionPay, which, if estimates hold true, may grow by 179% by the end of 2018.

Thanks to a growth spurt, the Asian market's share of total transactions is expected to double in size by 2018, making it a bigger slice of the pie than Europe, and nearly the size of the current U.S. market. China's UnionPay is already dominating the Asian market, giving Visa and other competitors a big run for their money. In fact, UnionPay is the only payment processor estimated to experience meaningful growth during the next few years by the Nilson Report.

Strike while the iron's hot
Though a 14% estimated decline in market share won't remove Visa from the top spot among payment processors, the overall tone of market predictions is one of a declining stature for the current king -- potentially reducing not only revenue, but clout among its merchant clients.

So, while Visa remains the top dog, it would be wise for the company to reevaluate its stance on current merchant fees. By increasing rates to match its current domination of the market, Visa could prepare itself for declining transaction volume in the future, and more wiggle room to manage revenue in a narrowing market.

Jessica Alling has no position in any stocks mentioned. The Motley Fool recommends American Express, MasterCard, and Visa. The Motley Fool owns shares of MasterCard and Visa. Try any of our Foolish newsletter services free for 30 days. We Fools may not all hold the same opinions, but we all believe that considering a diverse range of insights makes us better investors. The Motley Fool has a disclosure policy.