Listen up, Google (NASDAQ:GOOG)(NASDAQ:GOOGL) shareholders, because your favorite tech giant's musical talents are about to sound much more interesting.

On Tuesday, Google announced that it has acquired music curation and streaming specialist Songza. Financial terms weren't disclosed, but this supports a New York Post report last month that cited one source as stating that Google's Larry Page was in talks to gobble up Songza for a modest $15 million. Then again, the same report also quoted a second source as saying "the figure on the table was much higher and that Page would have to beat out several suitors."

Was that figure more than 30 times higher? Because that's how much the bidding would have had to climb from $15 million to match the nearly $500 million Apple (NASDAQ:AAPL) paid for music streaming service Beats Music as part of the $3 billion buyout of Beats Electronics just over a month ago.

To be sure, price seemed of little consequence to Apple for the perceived perfection of Beats Music. Apple CEO Tim Cook called the deal a "no-brainer," and added, "We love the subscription service that they built -- we think it's the first one that really got it right."

Something tells me Songza's estimated 5.5 million active users would disagree. Rather than rely on music industry experts to curate content, as Beats does, Songza built a slick, easy-to-use interface to find the perfect music for listeners based on the time and their activities, moods, favorite genres, and time periods. For example, here's what I was greeted with upon opening Songza early yesterday evening: 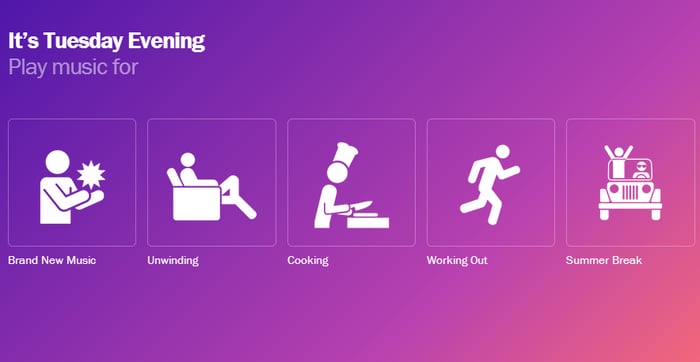 This would seem the most likely functionality to be integrated by Google into its own Google Play Music products. Though Google's music offerings do feature station customization and personalized recommendations, its curation techniques don't exactly distinguish it from the competition.

Apple now has Beats Music, which notably comes with the benefit of deep-rooted music industry experience. And Pandora (NYSE:P) built up a massive head start over the past 14 years (now sporting more than 75 million active listeners) by following a single self-professed mission: "To play only music you'll love." Then again, Apple and Google are developing their own music streaming services, while Pandora is striving against the difficult economics of its own business with the end goal of achieving sustained profitability.

Keeping Pandora in mind, this is the beauty of Google's latest acquisition: Songza's 5.5 million users are fairly impressive for a 6-year-old company entering an already crowded space, but it probably wasn't a profit- and revenue-generating machine that could command an exorbitant premium for its business. Rather, Songza is still small in the grand scheme of things, and -- contrary to Apple's decision to maintain Beats' brand as it moves forward -- Google should have little trouble assimilating and improving the new acquisition's most useful curation technology into its own music services.

Will selling out to Google upset some of Songza's biggest fans? Probably. For many, it might be like watching in horror as their favorite undiscovered band goes mainstream. For now, though, Google has said there are no plans to immediately change Songza, so it'll continue to work as usual for existing users.

But Google also said that in coming months it would explore ways to translate the best features of Songza to Google Play Music, and also will "look for opportunities to bring their great work to the music experience on YouTube and other Google products." When that happens, and assuming Google indeed kept the acquisition price relatively reasonable, its seems fair to say Songza will prove money well spent.