Last week Vertex (NASDAQ:VRTX) shares soared more than 40% on the back of its expanding cystic fibrosis, or CF franchise. Eye-popping gains and losses aren't unusual for smaller biotechs, but Vertex hardly fits this category. Following the announcement, the company's total market capitalization increased by roughly $7 billion.

After the dramatic rise and fall of hepatitis therapy Incivek even the most courageous investor should be wondering if the gains will last. Let's take a look at what Vertex has accomplished with its CF franchise, and the implications of last week's results to see if there is further potential upside. 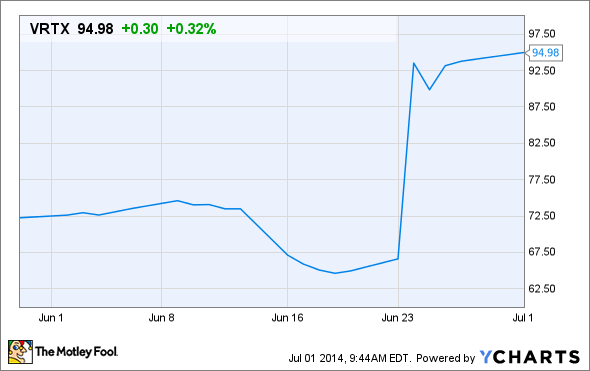 So far, so good
Considering the limited patient population Vertex has done incredibly well with the Kalydeco launch. Marketing in the US began in the first quarter of 2012, and the therapy racked up $171.6 million in its first year. Kalydeco sales more than doubled in 2013, and are expected to reach about $500 million in 2014.

As a treatment for just 4% of CF patients with a specific mutation, and a $300,000 per patient per year price tag, adding just a handful can impact the company's bottom line. Vertex recently took a big step toward reaching about 250 more across the pond. Last week the European Committee for Medicinal Products for Human Use, or CHMP recommended a label expansion for Kalydeco that would bring it to children aged six and older with eight genetic mutations not included in the original marketing authorization.

Back at home, Vertex continues to stretch the application of Kalydeco. Earlier this week the FDA accepted an application that could expand Kalydeco's usage to an estimated 300 more patients. The company plans to submit a similar application in the EU within the next few months.

From some to most
While label expansions for Kalydeco as a monotherapy should boost its potential market somewhat, addition of a combo therapy could increase it several fold. Last week the company announced results from two studies of experimental therapy lumacaftor given in combination with Kalydeco. The treatment designed to treat about half of all CF patients hit its primary endpoint with results that should squash doubts concerning its efficacy.

Some analysts were quick to point out the absolute improvement in lung function -- as measured by forced expiratory volume -- had a range of just 2.6% to 4%. While the improvement seems modest, it's important to remember that CF is a gradual disease and patients received just 24 weeks of treatment.

Avoiding a repeat
If you remember the incredible rise and fall of Incivek, you'll be happy to know Vertex's CF franchise is unlikely to see a surge of competition anytime soon. Currently available CF treatments manage symptoms, but do nothing to modify the disease itself. Pulmozyme from Roche (OTC:RHHBY) helps break up the abnormally thick mucus found in CF patients' lungs. Tobi from Novartis (NYSE:NVS) is an inhaled antibiotic for treating frequent lung infections.

Vertex's combo regimen isn't going to eliminate the CF market for Pulmozyme or Tobi, but it might thin it out somewhat. During the trial, it lowered the occurrence of pulmonary exacerbations requiring antibiotics by about one-third. The important takeaway is that Vertex is dominating a market with a lack of disease modifying therapies and is likely to keep it to itself for the foreseeable future.

Final thoughts
Given the company's position and pipeline, the $7 billion added to the company's market cap last week might be -- dare I say it -- even a bit light. Currently the company has another candidate in a phase 2 trial that could extend treatment to more of the CF market. If you look at lumacaftor's recent success in the clinic as an indication of the company's CF prowess, Vertex seems to be in good shape here.