Hunting, fishing, camping, and outdoor retailer and distributor Cabela's (NYSE:CAB) and sporting goods, apparel, and footwear retailer Dick's Sporting Goods (NYSE:DKS) can serve as a huge draw at your local shopping mall. However, just because it's crowded in your local parking lot doesn't necessarily mean the company prospers on a broader scale.

For that reason it always pays to look under the proverbial hood at a particular company's fundamentals to see if it's growing its revenue, net income, and free cash flow, the life blood of any business and the catalyst for any long-term capital gains and dividend boosts. It's also important to see if the business maintains plenty of cash for reinvestment.

Looking at Cabela's fundamentals its revenue and net income grew 37% and 352% over the past five years. However, free cash flow dropped 95% during that time. 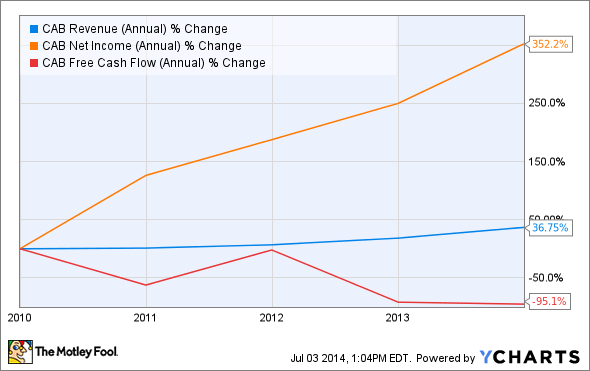 Increased capital expenditures to fund expansion contributed to the decline in free cash flow.  Investing in expansion doesn't necessarily represent a bad thing. However, investors need to pay attention to whether the company keeps plenty of cash on reserve.

Cabela's sits on a pretty solid balance sheet. Cash and long-term debt-to-equity came in at 30% and 33% respectively. On the cash front investors should feel comfortable with 10% or higher and long-term debt to equity of 50% or less. Long-term debt causes interest which can choke out profitability and cash flow. Cabela's falls under that threshold. In fact, Cabela's long-term debt declined steadily over the past five years. 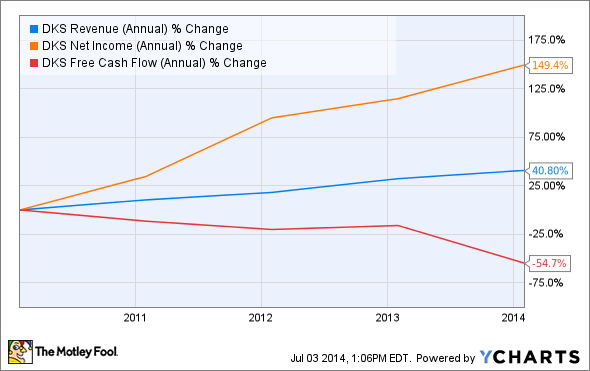 In the most recent quarter, Dick's Sporting Goods increased its revenue and net income 8% each.  Dick's sporting goods registered a negative $50 million versus a negative $109.3 million at the same time last year.  Store expansion and same store sales increases also contributed to the gains in revenue.  Lower selling, general and administrative expenses contributed to net income gains in the most recent quarter.  The improvement in free cash flow came from favorable changes in assets and liabilities.

The best way to gauge a company's free cash flow is to calculate the percentage of free cash flow it pays out in a full year which takes out seasonal distortion. Like long-term debt to equity investors should look for companies with dividend to free cash flow payout ratios of 50% or less.

This means that 50% of a company's free cash flow gets paid in dividends while another 50% gets used for other things like business reinvestment. Last year Dick's Sporting Goods paid out 55% of its free cash flow in dividends which lies slightly above that threshold.  Currently the company pays its shareholders $0.50 per share per year translating into a yield of 1.1%.

Looking at Dick's most recent balance sheet, cash clocked in at 11% of stockholder's equity . The company holds no long-term debt.

Things to look for
In the short term, look for Cabela's fundamentals to remain weak as gun and ammo sales return to more historical levels. Once the guns and ammo sales stabilize, fundamental expansion should continue. Cabela's soft goods and footwear continue to perform well. Moreover, Cabela's still plans on opening new stores, expanding square footage by 17% 2014 versus 2013.

Cabela's is the more expensive stock trading at 22 times earnings versus 20for the S&P 500 giving the company's greater market risk. Dick's Sporting Goods trades at a much cheaper 17 times earnings. This means that the stock price of Dick's Sporting Goods may suffer less as the result of disappointing earnings. Overall these two companies deserve more of your research time.