Qualcomm ( QCOM -0.29% ) is the world's leading vendor of cellular modems by both revenue and technology. While many other vendors have failed to bring out competitive LTE solutions that ship in meaningful designs, Intel ( INTC -0.51% )has seemingly found its way into a smartphone design that matters.

Samsung uses Intel's XMM 7160
Samsung typically launches two variants of every major Galaxy S/Note phone -- one aimed at North America and one for the rest of the world. The North American model generally features Qualcomm silicon, particularly as Qualcomm is today the only vendor with modems that support CDMA (which is required for carriers such as Verizon and Sprint).

The international variants of these flagships often use Samsung applications processors (known as Exynos) paired with either a Samsung modem or a modem from another vendor. For the Galaxy S5 Mini, Samsung is pairing a chip known as the Exynos 3470 (quad ARM Cortex A7 and ARM's Mali-400MP4 graphics) with Intel's first-generation multimode XMM 7160 LTE modem.

Welcome news to Intel
Intel's mobile and communications group has been posting some pretty ugly year-over-year revenue comparisons for some time. This is largely because the company's 2G and 3G business has been falling off as LTE gains momentum globally. 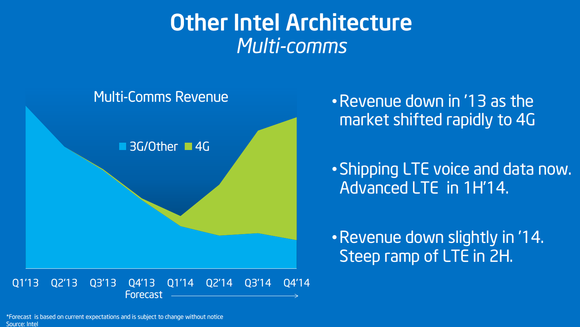 With the XMM 7160 gaining traction in a number of Samsung models (the Galaxy K Zoom and now the Galaxy S5 Mini for international markets), Intel's ramp-up of LTE may be starting to offset the decline in the legacy 2G/3G business. This isn't unexpected -- Intel signaled a pretty steep spike in LTE-related revenue during the second half of 2014, but investors typically value results far more than they do promises.

The longer-term strategic implications
As Qualcomm CEO Steve Mollenkopf has pointed out on numerous occasions, the complexity of these wireless standards continues to balloon, so fewer and fewer companies will be able to compete. Qualcomm, of course, is very likely to be the leader in cellular technologies for the foreseeable future, but the industry probably much wants a strong No. 2 player to keep Qualcomm in check.

Intel seems to be emerging as that No. 2. If the follow-on to XMM 7160 (known as the XMM 7260) can roll out in more meaningful devices over the next year or so, it should further build credibility as an alternative supplier.

More important, though, is that the deeper that Intel builds these ties with the handset OEMs via successful discrete LTE modem shipments, the more successful the chip giant is likely to be when it tries to gain further content share in smartphones (apps processor, connectivity).

Foolish takeaway
This is a marathon, not a sprint, and it seems that Intel continues to make solid and steady progress in the stand-alone modem/RF part of the market. But for Intel to grow into its mobile cost structure (which requires $7 billion-$8 billion in sales to hit breakeven) it must deliver competitive integrated apps processor and modem solutions across the various tiers. However, there's real hope for Intel investors that over the course of 2015 and moving into 2016 the company will get there.

Zillow Bets on Itself After Winding Down iBuying

Why ZipRecruiter Could Benefit From the Reshoring Trend

Digital Financial Services Will Be Sea Limited's Next Growth Engine