The Ford F-150 may soon lose its most American-made title to Tesla's Model S and the electric-car makers planned affordable car.

Ford (F 2.21%) retained its bragging rights this year on Cars.com's just-released annual list of the top American-made cars. The F-150 ranked first, thanks to continued strong sales and domestic-parts sourcing. But one new American automaker soon may be poised to become more red, white, and blue than any other manufacturer in the world: electric-car maker Tesla Motors (TSLA 4.67%).

Bragging rights that matter
In a country that values domestic pride, "American-made" often serves as a marketing tool. But what if Ford lost this bragging right to Tesla? Would it be yet another sign that Tesla is destined to play a big role in the U.S.?

There's no doubt about it: Once Tesla's Gigafactory is built, Tesla's once small operation will have officially transitioned to an American-made auto empire. Tesla's planned Gigafactory is no small undertaking. The $5 billion project has multiple states vying for it. Texas Gov. Rick Perry was even driving around in California in a Tesla Model S while making his intentions clear on Twitter: Texas wants Tesla's Gigafactory.

The only way to make this car faster is to make it in Texas. cc: @TeslaMotors pic.twitter.com/UaydvZvxYk

The Gigafactory, which Tesla says will build lithium-ion batteries at a scale of 500,000 vehicles by 2020, will employ approximately 6,500 people, the company says. In addition to Tesla's Gigafactory, the company is making its mark on U.S. soil by rapidly expanding its Tesla-branded Supercharging stations.

Then, of course, there is Tesla's Fremont factory, which the company says won't be maxed out until it hits production levels of 500,000 cars per year. 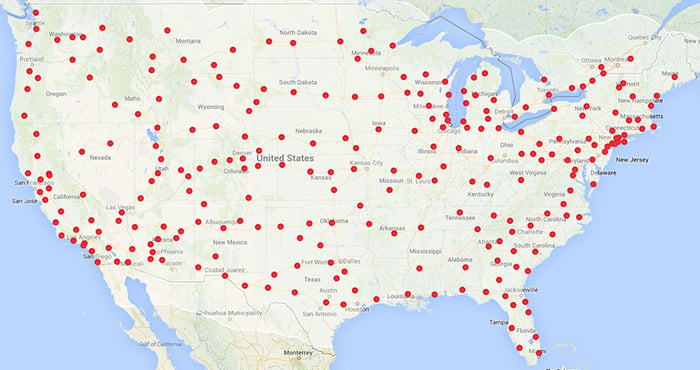 Tesla's planned Supercharger locations by 2015. The locations above will put a station within Tesla driving range of 98% of the U.S. population. Image source: Tesla Motors.

Morgan Stanley analyst Adam Jonas is already calling Tesla "the most important car company in the world." If Tesla's vehicles became the most American-made, it could be a more meaningful marketing tool for the much smaller Tesla than it is for Ford.

Unlike Ford, Tesla relies almost completely on the media and word-of-mouth marketing to generate awareness about its vehicles. It pays for no advertising, and offers no promotions. Getting the top American-made title would be just one more bragging right Tesla could add to its long list of accolades to help generate buzz.

More American-made than the F150?
Today, Tesla claims that its electric sedan has about 55% American- and Canadian-made content. But the vehicle is about to get an American-made boost.

After the Gigafactory is built, and thanks to Tesla's proposed efforts to source Gigafactory materials from the U.S., about 90% of Model S content could come from the U.S -- a figure that would beat out any other vehicle sold in the Land of the Free.

Fortunately, for both consumers and Tesla investors, Tesla's American-made cars will be available at more affordable prices by then. In conjunction with the Gigafactory, Tesla is planning to bring to market a fully electric vehicle with a starting price around $35,000. This more-affordable Tesla will put the automaker in a whole different ballgame.

Tesla CEO Elon Musk has said that the more-affordable Tesla will be slightly smaller than the Model S, and have a range of more than 200 miles. The planned time stamp on both the Gigafactory battery production ramp, and the launch of the more affordable Tesla, is 2017.

If Ford doesn't find a way to source more parts in the U.S., Tesla may soon make the most American-made vehicles.