Please ensure Javascript is enabled for purposes of website accessibility
Log In Help Join The Motley Fool
Free Article Join Over 1 Million Premium Members And Get More In-Depth Stock Guidance and Research
By Katie Spence - Jul 6, 2014 at 10:31AM

Boeing lands $2.8 billion to build NASA the most powerful rocket ever. 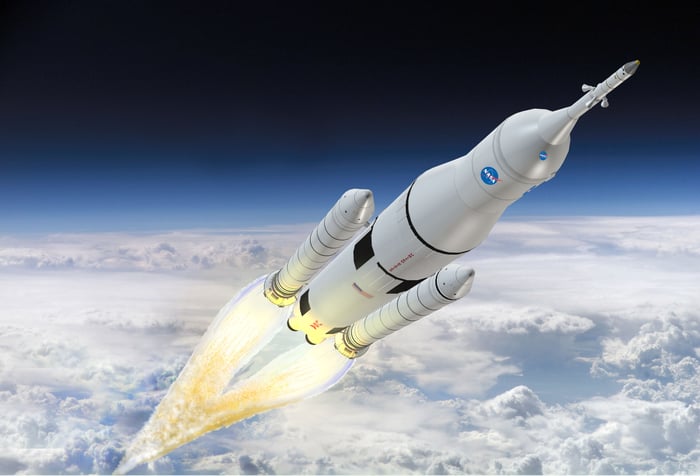 If you think the phrase "to boldly go where no man has gone before" only applies to Star Trek, prepare to be surprised. For $2.8 billion, Boeing (BA -1.98%) is building the core stage of the Space Launch System, or SLS, which is the most powerful rocket ever built. This contract could have humans exploring deep space sooner than we thought possible. Here's what you need to know.

A return to deep space
According to Boeing, the purpose of the SLS rocket is to "propel America's return to human exploration of deep space."  Further, the SLS rocket is supposed to allow people to travel beyond the moon's orbit for the first time, and could help further the goal of getting people to Mars -- of course, first it has to be tested. The first unmanned flight test is scheduled for 2017 and will provide a 77-ton capacity, while NASA hopes to have the first crewed flight test in 2021.  Plus, Boeing states that the final two-stage configuration will provide more than 143 tons of lift capability.

The good news is that Boeing has already completed the critical design review, the last major review before full production begins, and Virginia Barnes, Boeing SLS vice president and program manager, stated, "Our teams have dedicated themselves to ensuring that the SLS – the largest ever -- will be built safely, affordably and on time."  Let's hope she's right.

More money ahead
NASA's goal is to not only to take a crew beyond the moon's orbit for the first time, but also to rendezvous with a near-Earth asteroid by 2025, and journey to Mars and its moon in the 2030s.  To help with this mission, NASA charged Lockheed Martin (LMT 0.05%) with building the Orion -- a crewed exploration vehicle that's mission is to fly atop the SLS, and "provide emergency abort capability, sustain the crew during the space travel, and provide safe reentry from deep space return velocities," according to NASA.

More importantly, Orion's first flight test, called Exploration Flight Test 1, is scheduled for this December.  For the test, an unmanned Orion spacecraft will launch from Cape Canaveral atop a Delta 4 Heavy rocket. If all goes according to plan with the launch and high-speed reentry, the Orion will take a giant step toward NASA's plan to integrate Orion and the SLS,  which could prove to be even more lucrative for Boeing and Lockheed -- as NBC News reported, NASA estimates that rocket-building efforts could cost up to $18 billion through 2017, and approximately $35 billion by the time it carries astronauts past Earth's orbit.

What to watch
It's no secret that America wants humans to reach Mars. In 2010, President Obama spoke at the Kennedy Space Center and outlined his goals of sending astronauts to Mars by the 2030s. In fact, he said, "We will finalize a [heavy-lift] rocket design no later than 2015 and then begin to build it."  With NASA and Boeing finalizing a contract for the core stage of the SLS, America is one step closer to this goal. Moreover, for Boeing, this goal is a lucrative opportunity. In its first-quarter 2014 results, Boeing reported that its network and space systems segment revenue was $1.9 billion, a decline of 4% due to lower satellite volume.  Clearly, the recent contract win worth $2.8 billion, as well as significant future funding, is great news for Boeing's bottom line.