Three Fools consider the business implications of a recently debunked plan to cancel the comic book that created the modern Marvel universe. 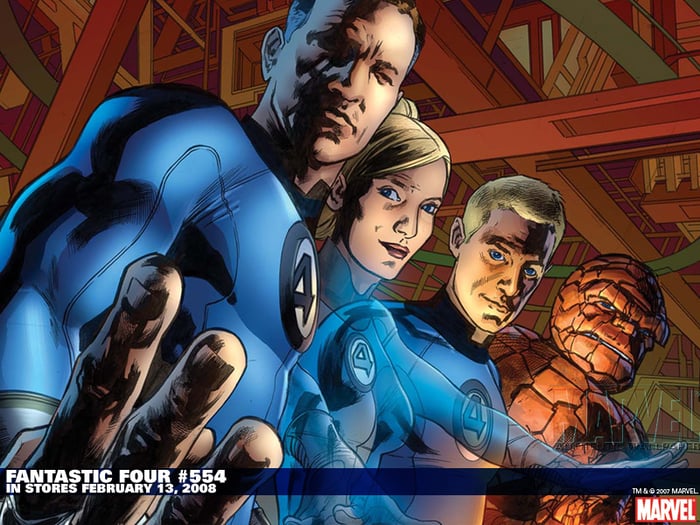 Marvel has since confirmed that fans will see Marvel's First Family on comic shop shelves in 2015. Yet Bleeding Cool stands by its reporting, noting that it was Marvel sources who said the book would be put on hold while Twenty-First Century Fox (FOXA) promotes its forthcoming movie starring the superhero franchise. The Fantastic Four, from director Josh Trank, opens June 19, 2015 with a sequel scheduled for July 2017.

All seems to be well for the moment. Still, it's troubling that we ever got to this point. We're left with too many questions unanswered. Not only about the relationship between Disney, Marvel, and their licensees, but also about the role comic books play in promoting comic book movies such as The Fantastic Four.

Would Fox suffer from a Marvel boycott? Would not having a monthly Fantastic Four title hurt Marvel and Disney? We asked three of our top media and pop culture analysts to weigh in.

Leo Sun: Movies boost comic book sales, not the other way around
I think people are overestimating the significance of print comics for Fox and Marvel. First off, Fantastic Four hasn't been very popular lately. It was the 60th best-selling comic of April 2014, trailing behind Elektra, Ms. Marvel, and Silver Surfer with 34,930 copies sold.

If we go back to July 2005, when Fox released the first Fantastic Four film, we can see that the print comic was much more popular, with Ultimate Fantastic Four reaching #9 that month. Moving ahead to June 2007, when the second film was released, Fantastic Four came in at #25. Based on those rankings, it certainly seems like Fox's films are actually propping up Marvel's comic sales rather than the other way around.

Meanwhile, sales of comic books aren't keeping pace with the films. Comichron reports that unit sales for Diamond's top 300 comic books each month rose 16% from 73.02 million copies in 2004 to 84.51 million copies in 2013. However, total revenue from those comics climbed a whopping 49% from $207.19 million to $308.71 million -- indicating that the industry's gains are coming from higher cover prices rather than new readers.

Now consider how much larger the movie industry is in comparison to the comic book industry. The first Fantastic Four film grossed $331 million worldwide while The Avengers grossed $1.52 billion. Overseas audiences -- most of whom have never read the print comics -- accounted for more than half of the box office total for both films.

Simply put, there's no reason to believe that discontinuing print comics will significantly impact ticket sales for these films, and Marvel would be hurting itself more than Fox if it does.

Steve Symington: Marvel wins, but not how you might think
At first glance, I'm tempted to say Marvel's actions would absolutely decimate Fox if the two went to war over Fantastic Four. But given the tremendous performance of X-Men: Days of Future Past so far, I'm not sure the answer is so clear-cut.

Sure, Disney and Marvel would love to have both properties back in their cinematic wheelhouse, and it makes sense that they don't want to provide any free publicity for Fox's competing franchises. But even given the absence of officially branded X-Men toys, Fox's latest mutant infused installment had grossed over $714 million worldwide through 41 days in theaters, including $224.8 million in the U.S.

For perspective, that's $3 million ahead of the impressive haul achieved by Marvel's Captain America: The Winter Soldier -- but earned in less than half the time.

Of course, we can't draw any direct comparisons considering Days of Future Past launched in the beginning of the lucrative summer movie season, and Fox's mutants still can't come anywhere close to the same level of overall success enjoyed by Marvel's Avengers franchise. But with or without the help of Disney and Marvel, it still goes to show Fox knows a thing or two about fostering its own comics-based cinematic properties.

That said, Fox's impending Fantastic Four reboot certainly isn't a guaranteed success, especially considering fans' enduring revolt for what many still view as questionable casting choices. Disney certainly wouldn't be doing Fox any favors by putting new Fantastic Four toys and comics on hold. But if Fox loses this battle in the end, I think it'll be at its own hand.

Tim Beyers: Fox and Marvel don't need to be close
Let's be clear what we're talking about. If Bleeding Cool has it right, all we would have seen is Marvel canceling and rebooting one of its signature comic book series -- one that, as Leo points out above, is selling modestly.

Marvel wouldn't have stopped hawking collected editions of prior work. All those great stories from Stan Lee and Jack Kirby would still be readily available to anyone with a few bucks and an iPad.

Meanwhile, Fox investors can take comfort knowing that Bryan Singer's X-Men: Days of Future Past diverges sharply from the source material. Collected editions of the original story wouldn't do much to market the film even if it needed the help -- which it didn't, as Steve points out above.

Trank, too, appears to be blazing his own path with The Fantastic Four. As screenwriter Simon Kinberg describes it, fans and investors should expect something more like Chronicle than either of Fox's earlier films.

"I talked to Josh [Trank], and he had such a clear vision of what he wanted to do with the film that was so different from the other movies -- it was grounded, real, gritty, and what it would really be like if you went through a transformation and lost control of your body. That, coupled with him wanting it to be a coming-of-age movie, felt fresh to me," Kinberg said in a May interview with The Daily Beast.

The message? Fox is going for a unique story that fans haven't yet read in the Fantastic Four comics. Which is ironic when you think about it. Cancelling and rebooting the FF might be just the sort of marketing push Fox's reboot needs.