Fusion-io (NYSE:FIO.DL) is a data storage devices manufacturer that offers flash-based PCI-e storage products, called NAND. These products are close to server processing units, so their performance is better than non-PCI-e NAND solutions. Hence, they are an attractive storage solution in read-intensive use cases like search and social media. This is primarily why Facebook and Apple are among Fusion's biggest customers. The company recently revealed its Atomic Series of flash storage, which promises increased capacity and performance than its predecessor.

EMC (NYSE:EMC) recently launched its own flash PCI-e solution, and Western Digital is also gearing up for flash competition via its acquisition of Virident Systems last year.

Thanks to its PCI-e-based technology, Fusion has been leading in flash technology performance. This technology has caught the eye of industry giants like Facebook, Apple, and HP, which together accounted for 61% of the company's revenue in 2013. Fusion's flash solutions outperform mechanical disks in I/O performance and also in terms of density. This has been the company's unique selling proposition in the recent past. However, it recently revealed its Atomic Series in the wake of EMC's emerging threat.

Atomic flash series
Atomic flash products are based on 20nm MLC, or multi-level cell, technology. They incorporate density and are at least twice as fast as the previous generation. Fusion has doubled its storage capacity to 6.4TB with the help of 20nm, which will also result in lower manufacturing costs.

The details in the above table show that PX600 is intended for more performance-oriented use cases than the SX300. Write cycles have been impressively increased beyond 100,000. This is good news for write-intensive use cases, as the client will not need to replace SSDs for a longer span of time, resulting in cost savings. The Atomic Series is expected to gain traction in server farms amid improved performance and lower space requirement.

On the other hand, increasing endurance and cost reductions enable Fusion's flash storage to catch up to mechanical disks in the data center space, where cost and longevity are of prime consideration. Furthermore, Credit Suisse notes that 20nm NAND will help the company be price competitive on a margin-neutral basis due to a lower bill of materials. Clearly, the Atomic Series holds promise for the future growth of the company.

EMC recently launched its XtremSF flash solution, which can be categorized as a direct threat to Fusion's product line. It's specifications are as follows: 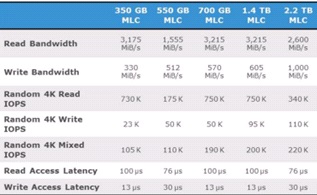 Comparing the 2.2TB solution with Fusion's PX600, the latter is better in terms of capacity and write performance, while EMC takes the lead in read performance. The point to note here is that Fusion offers up to 5.2TB per card, which will save space and reduce the overall cost, as far as server farm clients are concerned.

As the read IOPS, or input/output operations per second, is only marginally lower for Fusion in higher-density flash cards, it seems to be a better solution than EMC for large scale implementation. EMC offers attractive products for low-scale servers, but low-scale servers are normally implemented for in-house needs, and the tasks are more write-oriented, which favors Fusion. EMC's competition can't be written off, but Fusion seems to have an advantage with its current product offerings.

On another note, costs should dramatically decrease if flash-based solutions completely replace mechanical disks. Large corporations like Dell, HP, and Cisco are quite optimistic about the future of flash in comparison to mechanical disks, but cost barriers must be overcome to make it truly successful. IDC notes that the cost of flash is nearly ten times higher than that of traditional hard drives. Hence, flash is currently not a feasible solution for data centers with limited read/write requirements.

Bottom line
The flash storage arena is getting competitive, as EMC is targeting this segment for future growth. However, Fusion's Atomic Series puts it in a strong competitive position amid advanced process technology, price competitiveness, and higher density. The company's outlook appears to be promising, and product partners such as Dell, HP, and IBM are likely to continue their association. More importantly, the recent attractive product roll-out and growth promise of flash storage make Fusion a potential acquisition target for larger organizations like Seagate.