Please ensure Javascript is enabled for purposes of website accessibility
Free Article Join Over 1 Million Premium Members And Get More In-Depth Stock Guidance and Research
By Jason Hall - Jul 8, 2014 at 9:34AM

GT Advanced Technologies stock has fallen sharply on an analyst downgrade and concerns that shipments of Sapphire for Apple are lower than anticipated. Does this bode poorly for the future?

GT Advanced Technologies (NASDAQ: GTAT) stock is up more than 400% over the past 18 months, but it has fallen off sharply in July. The move south corresponds with a recent analyst downgrade, which was largely based on concerns that shipments of sapphire screens for Apple ( AAPL 3.44% ) products aren't growing as fast as the analyst was anticipating.

Combined with a growing level of short interest -- a measure of investors banking on the stock going lower -- is it time for shareholders who have hit it big over the past year to cash out, or is this just a blip on the radar and maybe even a good time to buy? Let's take a closer look. 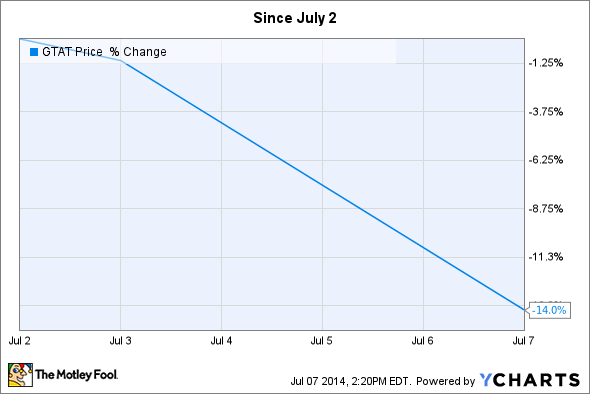 Caution signs
GT Advanced's share price hit an all-time high last week, besting the previous high price set in 2011. The difference with the company now, versus 2011, was that GT Advanced was coming off an all-time high in sales as well, with revenue over the previous year approaching $1 billion and net income of almost $200 million. Today, GT Advanced's cart seems firmly hitched to Apple, with nearly all of the market's attention on the partnership between the two companies for Sapphire material, which is expected to be heavily featured in the new iPhones and the anticipated iWatch, which could be announced sometime in September.

The iPhone home button is currently Sapphire, and Sapphire is expected to replace Gorilla Glass as the screen cover in the upcoming model. Source: author

In the interim, GT Advanced has launched a massive effort -- with Apple largely footing the bill through a series of prepayments -- to refocus its business on supplying sapphire material. This is a change of direction for GT Advanced, which has historically manufactured the machines that produce sapphire and other materials to companies like Apple and those companies' suppliers, which use the machines to produce material on their own.

The result -- along with a massive slowdown in the second half of 2012 and all of 2013 in its core solar equipment business -- was a precipitous drop in revenue. The company only recorded $23 million in sales in the first quarter, after reporting sales of less than $300 million in its last fiscal year. In short, the stock price -- again; just recently hitting an all-time high -- is largely based on a lot of speculation surrounding the potential of the Apple supply agreement. After all, GT Advanced showed a net loss of $82 million last year, after losing $142 million in the nine-month period before (the company adjusted its fiscal year in 2012), which followed three years of profitability.

This is certainly a big driver behind the increase in short interest so far in 2014: 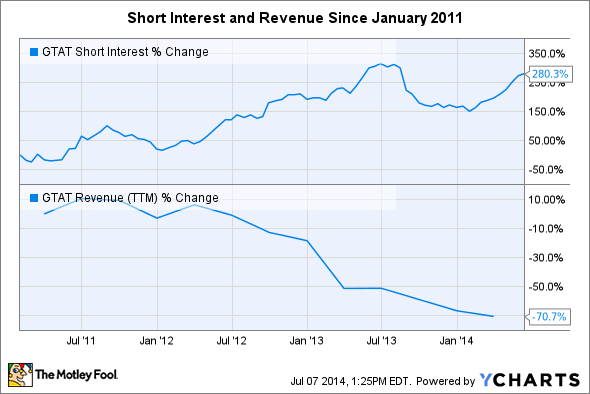 Solar renaissance is as important as Apple
While it's quite fair to call the Apple supply agreement transformative for GT Advanced, it's absolutely not the company's only source of business or growth. Even as sapphire becomes a larger part of the company's sales mix, and other consumer electronics makers shift to sapphire for their devices -- giving GT Advanced a way to diversify itself away from Apple -- the biggest benefit of the Apple deal could be in helping GT Advanced return to its core solar business. And the timing couldn't be much better.

Solar demand is exploding right now, and the industry growth is expected to put a lot of pressure on manufacturing capacity. At the same time, there has been a recent shift toward higher-efficiency solar panels. GT Advanced's core solar equipment and materials business -- which produces systems and equipment that solar panel and module makers use -- is heavily focused on faster production and making more efficient panels from both new and existing output lines. Most importantly, these new systems help solar manufacturers drive down the per-watt cost of solar panels.

Just how big is the potential behind this renewal of growth in the solar business? GT Advanced management is guiding to more than $1 billion in sales in 2015 after some $600 million-$800 million in 2014, along with (non-generally accepted accounting principles) earnings of more than $1.50 per share in 2016 -- a more than tenfold increase over projected EPS for 2014. From a forward valuation perspective, that makes GT Advanced a pretty cheap stock today, if things play out like management insists they will over the next few years.

Final thoughts: Apple still significant, but not "end-all, be-all"
I'm not trying to underplay the importance of the sapphire supply agreement with Apple, but it's important that investors understand what it means and what it doesn't. As a starting point, it will most definitely lead to a lot of volatility in the share price over the next several months -- at a minimum. Investors should focused on the news and not get caught up in the stock price too much; just make sure you understand any news out there, and its implications. The recent price drop is partly a product of some shareholders taking profits, as well as some sellers on the analyst downgrade.

But when you take the time to note that the downgrade was based on very short-term expectations with regards to supplying Apple with sapphire, there's very little material concern for the long-term outlook for the company. The Apple deal is important, but GT Advanced is still a diversified materials business with a strong growth opportunity in both the solar and the consumer electronics businesses.