More short-sellers have covered their positions on Mondelez in the recent month. Is this a sign to turn positive on this stock now?

Mondelez International (MDLZ -0.68%), a global snacking powerhouse that owns leading brands such as Oreo, Nabisco, and Cadbury, has seen a reversal of fortunes in the past few months.

In October 2013, activist investor Nelson Peltz commented at an investment conference in Chicago that Mondelez wasn't managing its costs well and could potentially double its EPS if it did so. This followed Peltz's proposal in July 2013 that PepsiCo (PEP -0.06%) separate its beverages and snacks businesses. Peltz eventually joined Mondelez's Board at the start of 2014.

Recently, there was a significant drop in short interest for Mondelez, with the number of shares sold short but not yet covered declining from approximately 13 million shares in May to about 12 million shares in June. Analysts from Societe Generale and Morgan Stanley also increased their target prices for Mondelez in May 2014. What prompted the recent shift in investor sentiment on Mondelez? Is it likely to persist?

Accelerate margin expansion
In May 2014, Mondelez announced plans to fast track its supply chain reinvention program. In the past, Mondelez's profit margins had been affected by inefficiencies in manufacturing and logistics. It operated an excessive number of distribution centers, while most of its existing product lines were more than six decades old and operating at less than full capacity. As such, it sees the opportunity to expand its margins and expects that the $3.5 billion restructuring program will generate a minimum of $1.5 billion in cost savings by 2018.

Mondelez's plans to drive margin expansion through supply chain redesign initiatives were first disclosed in September 2013, and initial results have been encouraging. As of June 2014, it has already either closed or streamlined 30 manufacturing plants and has reduced the headcount for its supply chain operations by approximately 3,000. In addition, Mondelez's new cookie factory in Mexico, which benefits from lower operating costs than its U.S. facilities, is on track to open by the fourth quarter of 2014.

Looking ahead, Mondelez wants to speed up several of its supply chain projects to derive cost savings in a shorter period of time and realize greater margin upside. Mondelez's optimism is validated by the fact that it has raised the lower end of its 2016 operating income margin target from 14% to 15%. 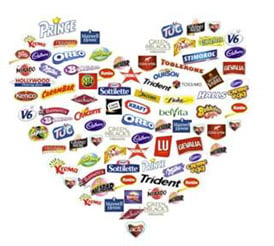 Focus on snacks
Mondelez also announced in May 2014 that it will merge its coffee business with D.E Master Blenders 1753 to from the largest pure-play coffee company in the world. Mondelez will own a 49% interest in the new combined entity, Jacobs Douwe Egberts.

This makes strategic sense as the snacks business is far more attractive--just look at PepsiCo. Its operating margins for the North American businesses of Frito-Lay North America and Quaker Foods are 27% and 24%, respectively, compared with 14% margins for its U.S. beverages business. Snacks aren't just more profitable than beverages; the potential for growth is equally impressive. PepsiCo estimates that the average U.S. consumer consumes snacks 67 times a month on average, and only eight of these snack occasions involve Frito-Lay snacks.

Mondelez has witnessed similar dynamics for the product segments it competes in. Based on its compilation of data from ACNielsen, global demand for biscuits, chocolate, and candy has grown by 5.5%, 5.3%, and 4.5% respectively in 2013. In contrast, coffee sales contracted by 1.9% in 2013. Mondelez is the global market leader in biscuits and chocolates with market shares over 15% in both categories, making it the best proxy for the growth in the $1.2 trillion global snacking market.

While PepsiCo hasn't heeded Peltz's advice to separate its snacks and beverages businesses, Mondelez has obviously accepted Peltz's suggestion to put a greater emphasis on snacks. With the completion of this proposed merger, snacks will account for 85% of Mondelez's revenues on a pro forma basis. Prior to this transaction, Mondelez generated 75% of its sales from snacks in 2013. This will allow Mondelez to focus its attention on capturing further market share in the high-growth snacks product category.

Foolish final thoughts
Like Peltz, most investors had concerns about Mondelez's cost structure and its weaker beverages business. With its recent plans to accelerate its supply chain initiatives and spin off its coffee business, there is renewed optimism about Mondelez's future prospects.

Mondelez's share price has risen by 9% in the past three years. However, the global snacking powerhouse still looks attractive at 19 times forward P/E, given its room for margin expansion in the next few years and growth in snacking demand.

Mark Lin has no position in any stocks mentioned. The Motley Fool recommends PepsiCo. The Motley Fool owns shares of PepsiCo. Try any of our Foolish newsletter services free for 30 days. We Fools may not all hold the same opinions, but we all believe that considering a diverse range of insights makes us better investors. The Motley Fool has a disclosure policy.

Is It Too Late to Buy Dutch Bros Stock?