Third-quarter earnings may show further growth in China and Japan
Apple seeks to impress investors on July 22 when it reports third-quarter earnings, after posting better-than-expected results in the prior quarter. The company expects third-quarter revenue to run between $36 billion-$38 billion, with gross margins ranging from 37%-38%. These figures compare to quarterly revenue of $35.3 billion and gross margins of 36.9% in the same period a year ago. 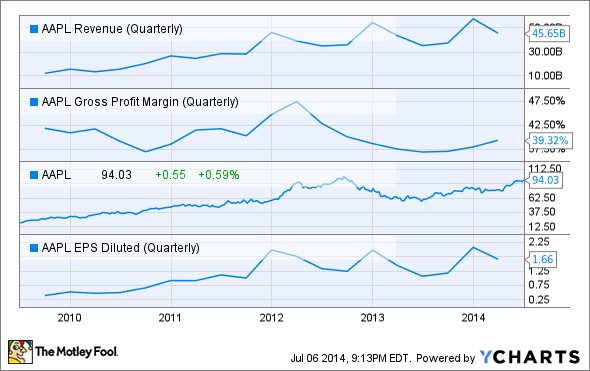 New partnerships with China Mobile and NTT Docomo made significant contributions to Apple's top and bottom line last quarter. Apple recorded double-digit YoY sales growth in China (13%), Japan (26%) and across multiple developing economies, including Brazil, India, Indonesia, and Vietnam. Apple's new-found momentum in these regions could extend into third-quarter earnings. The company expects growth in China to broaden in the future as China Mobile expands its 4G network.

Samsung forecasts second-quarter revenue of 52 trillion won, down 9.57% from 57 trillion won a year ago. Operating profits likely fell 24% to 7.2 trillion won -- the third straight quarter of profit declines. Samsung said it faced a strong Korean currency, slow smartphone and tablet shipments, and rising competition in China and European markets, all of which put downward pressure on earnings growth.

"Samsung's earnings may bottom out in the second quarter, but the expected launch of [Apple] iPhone 6 models will be a huge challenge for the company's high-end models in the second half," said IBK Securities analyst Lee Seung-woo.

Apple added $30 billion to its stock buyback program in April, raising share repurchases from $60 billion to $90 billion because management believes the stock is undervalued. A buyback will reduce the number of shares outstanding, and possibly increase Apple's earnings per share in upcoming quarters.

Apple also rewarded shareholders by raising its quarterly dividend 8%, and promising to increase its dividend on an annual basis. Regular cash dividends can positively influence share value, as institutional and retail investors consider cash dividends a measure of investment quality.

Bottom line
Apple is poised to report strong third-quarter earnings later this month, despite industrywide competition threatening market share and margin growth. Strong sales in China and Japan could roll over into earnings and surprise investors. If Samsung fails to bolster its mobile business, the company may struggle in the second half of this year at the expense of low-cost producers in emerging markets. Apple shares could rise higher as investors bid on the arrival of new products and services launching later this year.