Please ensure Javascript is enabled for purposes of website accessibility
Log In Help Join The Motley Fool
Free Article Join Over 1 Million Premium Members And Get More In-Depth Stock Guidance and Research
By Adem Tahiri - Jul 9, 2014 at 10:00AM

Activist Investors are looking to shake-up PetSmart. Can this pet store swim with the sharks?

Last week controversial hedge fund Jana Partners announced plans to shake-up PetSmart (PETM), while revealing a large stake in the retailer. Jana has pushed for radical changes at other retailers like Walgreen (WBA -0.34%)recently, as a means to boost stock prices over a short time frame.

With that in mind, can this move help the Foolish long-term investor?

What happened?
Last Thursday Jana announced it had taken a 9.9% stake in PetSmart. According to Mike Troy of Retailing Today, Jana "indicated it plans to have discussions with the PetSmart board and management to review strategic alternatives such as a sale of the company, improving operating performance and the company's capital structure, and how to return significant capital to shareholders." Jana also suggested it may seek to make changes to PetSmart's board. On Monday, PetSmart announced it would consider all options, including a sale.

Jana is investing in PetSmart because it feels the stock is undervalued, but should it really be pushing PetSmart to change its business? This type of activism typically arises at woefully mismanaged businesses.

It's hard to argue with PetSmart's long-term results
PetSmart is not a bad business by most measures. It simply had a bad first quarter, as most retailers did. For the quarter earnings rose 6.1%, and sales were up 1.1% year over year, but comparable sales slipped. Jana describes itself as "event driven," meaning it looks for unique opportunities to swoop in and unlock value in a business. Is one bad quarter enough of an "event," for Jana to have a say at PetSmart's table?

Both revenues and returns on capital have grown substantially at PetSmart over the past five years. For every dollar that investors put in to PetSmart, it gives us 37 cents back, or 37%, of that capital (that's what ROIC is). While we don't actually get to touch all that money, it gets reinvested in the business which (in theory) benefits all share holders, long-term. 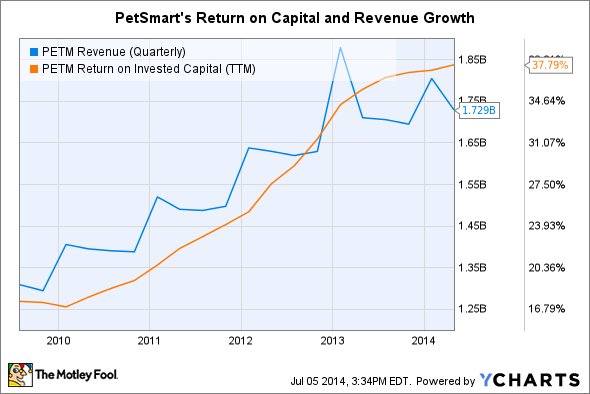 Jana wants PetSmart to give share holders more of that capital now, rather than use it for reinvestment. While there's nothing wrong with dividend payments, demanding that a good business spend its cash immediately can be a sign of short term thinking. Now that PetSmart is considering placating Jana, perhaps Foolish investors should be worried. The chances are good that Jana is more interested in PetSmart's short-term stock price than its business.

Life with Jana is too short
For a peek into what life with Jana is like, let's take a look at its relationship with Walgreen. For months Jana's Barry Rosenstein has pushed a tax loophole that he believes Walgreen "should clearly be looking at." Thanks to Walgreen's merger with Switzerland-based Alliance Boots, Walgreen could actually move its corporate headquarters and skip out on paying some U.S. Corporate taxes. It's exactly the "event-driven" scenario that Jana seeks to unlock (what it calls) value.

After months of pressure led by its large shareholder Jana, Walgreen is now seriously considering renouncing its U.S. corporate citizenship to boost shareholder returns. This naturally has led to some fierce criticism. Andrew Ross Sorkin, of the New York Times recently criticized the audacity of Walgreen's even considering this, because the chain has received "$16 billion in annual revenue from the government (via medicare and medicaid), and had recently negotiated $46 million in corporate income tax credits from the state of Illinois."

Aside from bad PR, this type of activity isn't good for Walgreen's business. Management should be focused on improving service, delighting customers, and investing in its employees. That's what sets great retailers apart in the long-term.

While some are critical of Walgreen CEO Gregory Wasson, most executives act this way amid the pressure of activist investors. Wasson has had to spend his time battling for control of Walgreen, and to do so he's focused on rewarding activists in the short term. For the past six months, and some would argue two years, Walgreen hasn't been focusing on improving its business. It's been trying to avoid the tax man.

Stay focused on businesses
While I'm sure that Jana bought PetSmart, on some level, because of the fundamentals, that's not what sent the stock up 12.5%. The stock was up because activists typically bring lay-offs, buyouts, dividends, or mergers. The problem is that we can't rely on any of this financial engineering any more than we can rely on stocks to go up or down. All we can rely on is the certainty that this will be a distraction for PetSmart's management.

If Jana's plans don't work out, there's no telling what business we'll be left with a few years from now. Swim with caution.

Adem Tahiri has no position in any stocks mentioned. The Motley Fool recommends PetSmart. Try any of our Foolish newsletter services free for 30 days. We Fools may not all hold the same opinions, but we all believe that considering a diverse range of insights makes us better investors. The Motley Fool has a disclosure policy.

Why Allbirds Stock Was Plunging Today