Companies are usually wary of activist investors, but Manitowoc (NYSE:MTW) isn't complaining. In an announcement that sent Manitowoc shares soaring late last month, investment firm Relational Investors disclosed having purchased 8.5% stake in the company in a bid to push management to split it in two.

Instead of giving the activist investor a cold shoulder, Manitowoc acknowledged having had "several conversations with Relational Investors" and that it will "consider and review Relational Investors' suggestions." Well, then, Relational might have just sown the seeds of Manitowoc's split. But is the excitement among investors overdone?

Why Manitowoc may not want to split
The case for splitting Manitowoc is pretty strong. Its two businesses are poles apart in terms of product line and the industries they serve. Its crane business caters to the needs of the construction industry, while its foodservice products such as ice machines and fryers serve the needs of restaurants and supermarkets, among other institutions.

Manitowoc's fryers are a hit among food chains. Source: Manitowoc

There are apparently no synergies between the two businesses that would strongly justify running them under the same roof. Perhaps the major reason Manitowoc runs such diverse businesses is the varying degrees of their cyclicality, which has what I would term the "cancellation effect" on its overall performance.

While both businesses are cyclical, construction cyclicality is deeper and generally lasts longer. Moreover, while declining construction activity is a lead indicator of a downturn, slower consumer spending, which directly affects the restaurant industry, is usually part of the aftermath of a recession. So foodservice tends to be the more resilient one among Manitowoc's two businesses, which helps smooth out the imbalances in its performance in the longer run. For example, a stronger foodservice business has helped Manitowoc cancel out some of the weakness in crane sales in the past couple of quarters.

So does Relational Investors' logic make sense?
Manitowoc's diversity is bothering Relational Research, which believes that this unusual business combination is causing the company "to trade at a perpetual discount." Simply put, Relational believes that Manitowoc has remained undervalued because of its business structure.

Relational's argument may appear baseless if you compare the growth in Manitowoc's share price with its peers in recent years, especially after the run up in its shares over the past year. Consider the following chart. 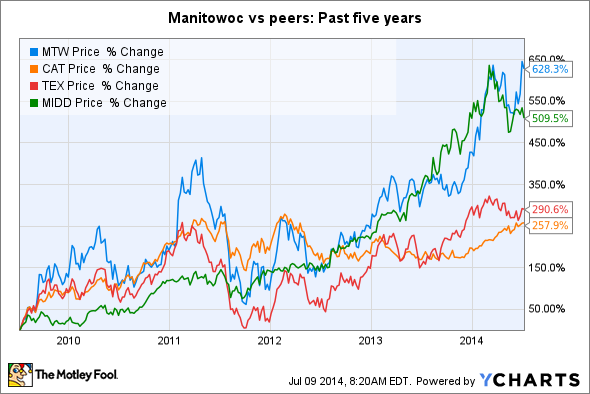 Having returned 628% over the past five years, Manitowoc has handily outperformed its peer group. Foodservice competitor Middleby (NASDAQ: MIDD) was a strong contender until its shares lost ground following an all-time high this past February.

Comparatively, construction-equipment rivals Terex and Caterpillar (NYSE: CAT) have hugely underperformed Manitowoc, each returning less than half the value over the five-year period. More importantly, the gap between Manitowoc and the two companies has widened substantially over the past year, indicating that the market may have factored in much of the value of its foodservice business.

But Relational goes a step further to justify its stand, and argues that Manitowoc trades at an EV/EBITDA multiple (the ratio determines how much a company's worth) that's more in line with its crane competitors and lags foodservice companies. In other words, Manitowoc's current valuation primarily reflects its crane business, and not its foodservice business. For perspective, Manitowoc sports an EV/EBITDA of 13.4 versus Caterpillar and Middleby, which trade at 11.3 and 17.4 times EV/EBITDA, respectively.

According to Bloomberg, Manitowoc's foodservice business could have an implied enterprise value worth $3.9 billion based on 2014 industry EV/EBITDA estimates. That's well below Middleby's current enterprise value of $5.3 billion, even though Manitowoc is generating greater revenue from its foodservice business as compared with Middleby over the past 12 months. So on that count, Manitowoc does appear undervalued when compared with Middleby.

The interesting side of the story
Perhaps the disparity in the operational performance of its two businesses is one of the major reasons an investor would favor a Manitowoc split. Despite contributing little less than 40% to its total revenue, Manitowoc's foodservice business has been far more profitable than its cranes business. The following chart shows you how. 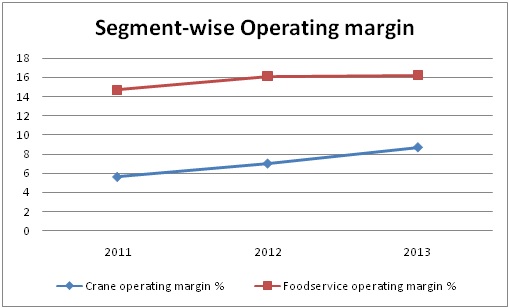 So while operating margins from its foodservice business tops 16%, Manitowoc's crane division is yet to hit the 10% mark.

Here's an interesting fact: Manitowoc's foodservice operating margin has improved 6 percentage points since 2008, when the company acquired food-equipment manufacturer Enodis. In contrast, its crane division margin has dropped nearly as much over the period.

So logically, a standalone foodservice company should enjoy a better valuation, as Relational Investors argues. At the same time, a separate crane company could pose a big challenge for Manitowoc, as it will have to battle out business cycles to maintain profitability. And that's exactly why Manitowoc may shun the idea of breaking up.

Limited upside?
One thing's certain: Relational Investors will not sit tight if Manitowoc chooses to ignore its recommendations. But Manitowoc can easily seek support in Wisconsin state laws, which give corporate boards an upper hand over activist investors. In fact, these laws could prove a major hurdle to Relational's campaign.

Even in an unlikely scenario where Manitowoc decides to split, it will be a long, drawn-out process. So there may not be much upside left in the stock, especially after its 11% jump since the news, as of this writing. I think the market may have overreacted to the possibility of a spinoff, and any fresh bets on the stock from here could turn risky.