The utility industry has a problem: It often can't get power from where it's generated to where it's needed. The situation is getting better, but the issue certainly isn't solved yet. That's why Warren Buffett bought Canadian power line owner AltaLink. It's also why you should take a look at ITC Holdings (NYSE:ITC).

A Texas-sized problem
Texas is a giant power market in addition to being a giant state. And a few years ago it had a big problem; there had been lots of investment in wind projects but they couldn't get all their power to where it was needed. This turned the Texas power market on its head, with power prices actually going negative. 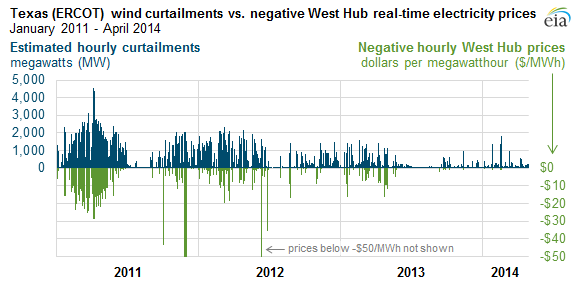 For example, in four years the state doubled its utility-scale wind capacity. These wind projects were located in largely rural areas, as you would expect, and lacked adequate "pipes" to get their power into areas where it was needed. Over the last three years, however, 3,500 miles of transmission lines have helped straighten things out.

This highlights the problem, and solution, to a major change taking place in the energy market. The increasing use of renewable power sources like wind and solar is great, but such power sources are often in locations not easily connected to, well, anything else. Texas' rural wind farms are an example, but so, too, is the massive Ivanpah solar installation which is located in a nice sunny California desert.

A problem is an opportunity
But this just means there's a big opportunity for companies that are building transmission lines. American Electric Power (NASDAQ:AEP) is a good example in Texas. The company's 50/50 Electric Transmission Texas joint venture with Buffett's insurance holding company has about $2 billion worth of "in service" assets with plans to increase that by 50% over the next decade. (Buffett's transmission bet isn't limited to our northern neighbor.)

More or less, your call
That's a big business, but it's only one piece of giant American Electric Power. The company has utility operations in 11 states and does everything from power lines to power generation, including a river barge business. ITC Holdings is a pure-play transmission line company, for those who prefer their businesses simple.

ITC Holdings owns over 15,000 miles of power lines across seven states, including Texas. That's nearly $6.5 billion worth of assets, making ITC Holdings about three times as large as Warren Buffett's and American Electric Power's Electric Transmission Texas. And while ITC Holdings highlights the changing power market as a core growth opportunity, it also stresses the need to fix old wires.

For example, between 1975 and 1999 investment in power lines fell by nearly $120 million a year. That came at a time when demand was increasing: Between 1980 and 2000 power consumption doubled. So there's more to like about transmission lines than just hooking a few wind farms to the grid. In fact, ITC Holdings believes we are, "In [the] Infancy of [a] Multi-Decade Investment Cycle." It expects "$120-$160 billion of Investment per Decade Through 2030."

And because these are utilities we are talking about, you and I get to foot that bill via rate increases. Isn't that wonderful? Well, it is for companies like ITC Holdings and American Electric Power. And it's just as good for their shareholders, who will see earnings improve as rates get hiked because of what are increasingly vital capital spending projects.

In fact, regulators currently take a pretty positive view of such projects. And that means ITC Holdings is a great pure-play opportunity in the transmission space. But American Electric Power is no slouch, either, if you want a more diversified investment. Even you can invest like Buffett sometimes.