The historic surge in airlines is unlikely to repeat itself for another year.

The Dow Jones Industrial Average (^DJI 0.23%) fell again Thursday, losing 70 points (0.4%) on a day in which initial fears of a European banking crisis gave way to another ho-hum bout of trading. Boeing (BA -0.88%) was one of only seven Dow stocks to gain anything today, on the heels on an updated industry forecast that boosted projected global demand for new airplanes to 36,770 between 2014 and 2033.

However, it may be more sensible to credit sector leader United's revised guidance, issued after Wednesday's close -- the carrier boosted second-quarter consolidated unit revenue (passenger revenue per available seat mile) expectations from a year-over-year growth rate in the 1% to 3% range to a 3.5% growth rate, and also noted that nonfuel unit costs would be flat, rather than increasing by 1.3% to 2.3%. Southwest Airlines (NYSE: LUV) and American Airlines also released good results for June yesterday, and now all four carriers are pushing back to positive territory after a lousy month: 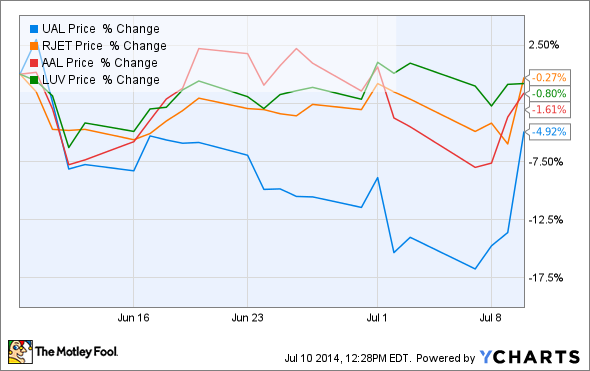 This is only one of many good days for the airline industry this year. The airline-heavy Dow Jones Transportation Average (DJINDICES: DJT) has outperformed the Dow Industrials nearly three-to-one over the past year, and its gains look even more impressive in 2014 when compared to its broader index sibling: 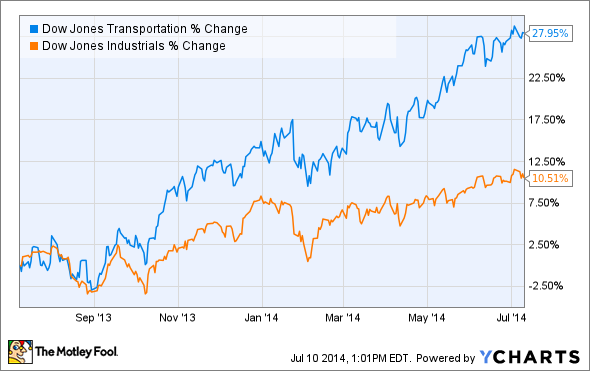 Not only has the Dow Transportation Average surged past the Industrial Average over the past year, it has trounced the index on five- and 10-year time frames as well. In fact, there aren't many time frames on which the Transports have underperformed the Industrials, as I've highlighted before. Airlines aren't everything in the Transports (only five of its 20 components are commercial carriers), but the performance of airline stocks over the past five years has been historically good, almost shockingly so. Only one of the Transports' five current airline components has underperformed even the single best-performing component on the Industrials: American Express (NYSE: AXP). 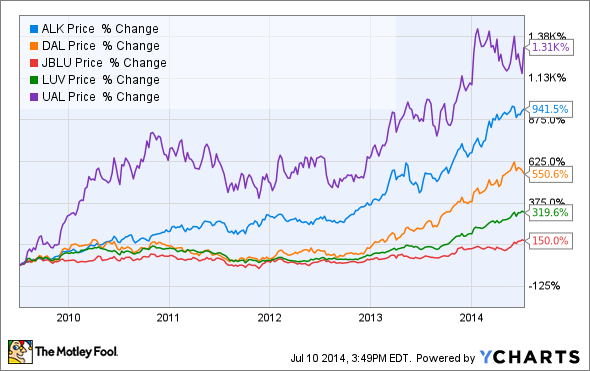 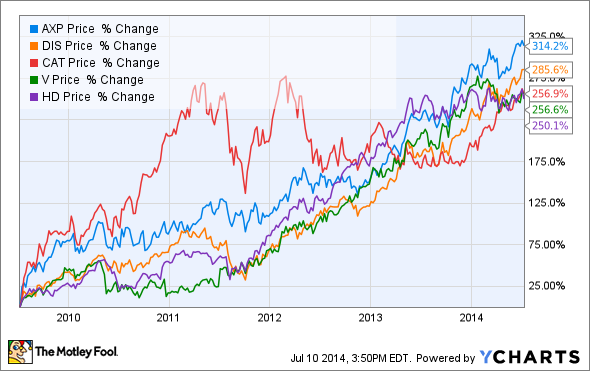 Investors who bought into major airlines five years ago have had no reason at all to be disappointed, since every single major national or regional airline on the market has outperformed the Dow Industrials over the succeeding period, if they've been traded that long: 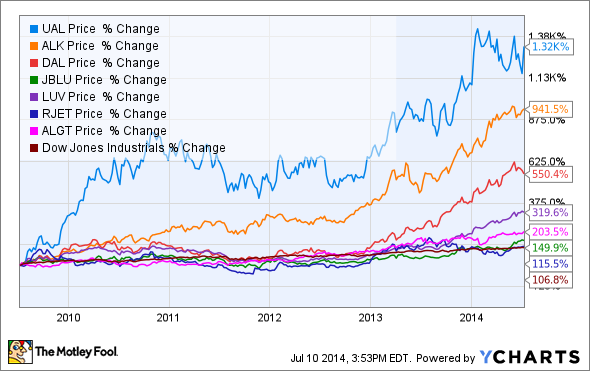 Spirit Airlines (NASDAQ: SAVE) only began trading in mid-2011, and the current stock of American Airlines has only been available on public markets since the company merged with US Airways in late 2013, but both have handily trounced the Dow in their time on the markets as well, with Spirit up over 450% in three years and American Airlines up roughly 70% since its debut.

There are over 1,500 publicly traded companies on U.S. markets with a market cap of over $1 billion that have seen any share-price growth this year. Only 42 of them have had a better year than American Airlines, and none has a present market cap more than roughly half the size of American Airlines'.

This should be shocking to any investor who has followed Warren Buffett's wisdom -- the legendary money manager has gone so far as to say that smart capitalists should have simply shot aviation pioneer Orville Wright out of the sky in 1903 to avoid all the pain and monetary losses that followed. However, there is an easy explanation for why this time has been different, and for why it may not persist too much longer.

Take United Continental. Its shares have grown by over 1,300% in five years, but the company began so deep in the red that it was losing $0.31 for every dollar it made in revenue. United Airlines had emerged from bankruptcy five years prior to its merger with Continental, and Continental itself was thought also to be at risk of bankruptcy (or at least serious financial distress) before the merger closed. American Airlines has only been traded for a short while because it exited bankruptcy just a short while ago. Delta exited bankruptcy in 2007, and Republic and Southwest both own the assets of airlines that declared bankruptcy in the past decade. Investing in a bankrupted company in the hopes of a turnaround is a strategy used by many investors. Investing in an entire bankrupted industry is not an opportunity often available.

These airlines have also enjoyed five post-crisis years of stable fuel prices while simultaneously implementing a raft of onerous service charges on passengers. Had the price of oil shot higher at any point in the past three years, many of these "success stories" would likely be facing bankruptcy all over again. The combination of factors that boosted the airline industry to market-thrashing gains in recent years is a historic abnormality -- it's rare that oil prices have remained in such a narrow band for such a long time.

Will the Dow Transports keep thrashing the Dow Industrials over the long term? It's certainly possible. Will airline stocks continue to thrash the market as they have over the past few years? That will depend largely on the price of oil and the strength of the economy, and those two factors have rarely been as stable as they've been since the financial crisis.

The Motley Fool recommends American Express. Try any of our Foolish newsletter services free for 30 days. We Fools may not all hold the same opinions, but we all believe that considering a diverse range of insights makes us better investors. The Motley Fool has a disclosure policy.