Plug Power (NASDAQ:PLUG) and SolarCity (NASDAQ:SCTY.DL) have been two of the hottest energy stocks of the last two years. The raw growth potential of these two companies is impressive; however, alternative energy is a sector fraught with snake oil salesmen peddling sky-high dreams but delivering mostly massive losses. 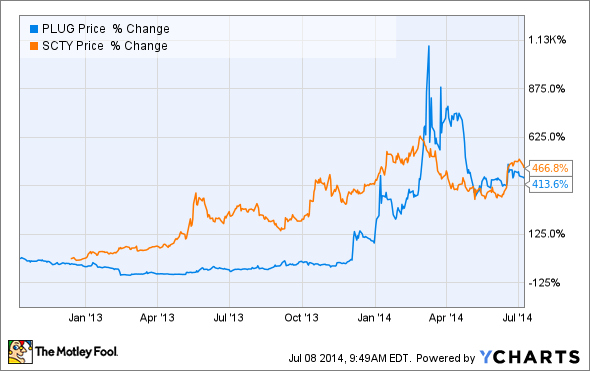 This article will take a closer look at Plug Power and SolarCity, to first decide whether either might actually live up to its promised growth potential, and then explain why even this might not prevent long-term investors from losing money.

SolarCity: Brilliant future, terrible investment
Bloomberg estimates that rooftop solar will grow by 20% annually through 2020 and that Solar will make up 18% of energy generation by 2030.

SolarCity has a business model I love. It installs a solar power system on a rooftop for free and signs a 20-year contract with the owner for power generation at a lower cost than the customer is currently paying. Both parties win, with SolarCity becoming a cheaper competitor to the local power utility.

SolarCity's growth has truly been spectacular and is likely to continue to be for many years. Consider this:

So how can I love SolarCity, yet say it's a terrible investment? Because there are three factors that will likely result in long-term losses for current investors: mounting costs, sky-high valuation, and high share dilution. 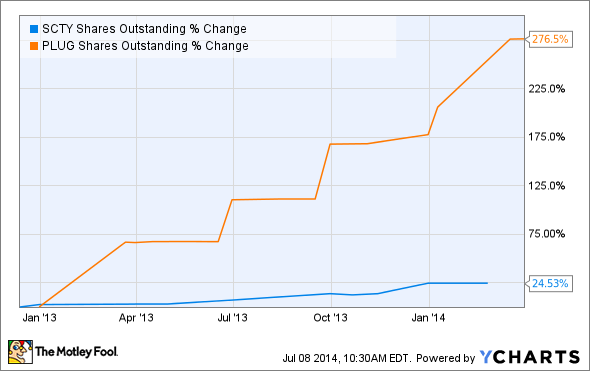 These factors are why analysts are predicting negative earnings per share (EPS) growth until 2023 and why current SolarCity Investors are likely to underperform the market over the next 10 years.
Between 2011 and 2013 SolarCity lost $318 million and through 2015 it's expected to lose $734 million more.
That loss is probably conservative because of SolarCity's recent acquisition of solar panel maker Silevo. SolarCity paid $200 million cash (leaving it with just $320 million)  for Silevo's 32 MW of capacity.
The justification for the Silevo purchase was to offset the cost of high US tariffs on Chinese solar panels that SolarCity was purchasing.
In the long term this goal will be accomplished because SolarCity is planning on expanding Silevo's capacity 33-fold to 1 GW within two years. By that time Silevo's panels are expected to be 24% efficient, resulting in a 25% reduction in panels needed per system.
However, SolarCity has said it will cost $500 million to expand this capacity and it will likely owe Silevo an additional $150 million for meeting certain production growth goals. A few years later SolarCity plans one or more additional factories to expand capacity to 10 GW, requiring billions of dollars more.

SolarCity will require $1.1 billion in new capital within the next two years to pay for its ambitious expansion goals, and that means substantial shareholder dilution. Combine this dilution with SolarCity's price/sales ratio of 32 and the stock is poised to drop massively during the next market correction. I would advise interested investors to put SolarCity on a long-term watch list and buy after such a crash. 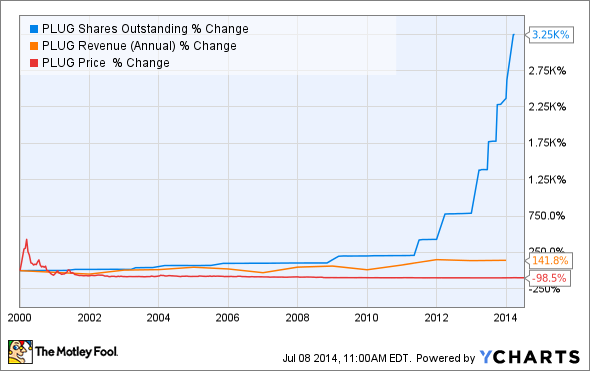 As the above two charts show, over the last 13 years Plug Power's revenues have grown by 2.73% annually yet its share count has grown by 31%/year while long-term investors lost nearly all of their money. In the last 18 months the share count has nearly quadrupled. Shares have soared because Plug Power operates in a potential $4 billion market, fuel cell-powered fork lifts and delivery trucks, and sales are projected to soar 350% between 2013 and 2015.

However, in the first quarter Plug Power reported revenues of just $5.6 million, down 12.5% from 2013. Meanwhile losses for the quarter grew 783% from $8.6 million to $75.9 million. Plug Power has a long track record of failing to deliver on growth promises. For example:

Foolish takeaway
SolarCity is a fantastic solar company with a terrific business model that might one day make a great investment . However, for now the only thing more impressive than its growth is its ballooning costs, which are accelerating. This means massive shareholder dilution is likely for years to come and at these valuations, SolarCity investors are at severe risk of losing money over the next decade. Meanwhile, Plug Power is a perfect example of a hype stock that never delivers on its promised growth potential and whose long-term shareholders have only obscene dilution and losses to show for their patience.