On some key metrics, semiconductor maker Linear Technology outperforms competitors such as Texas Instruments and market leaders such as Intel. Does this make Linear a good long-term investment?

It's surprising to hear chipmaker Linear Technology's ( LLTC ) management describe aspects of their own company's performance. They use sober phrases like "reasonably good" and "it met our expectations," instead of the bombastic statements that are common in many other companies.

However, lying behind this modest language is a tightly run and highly profitable company, with an industry-leading gross margin and 112 consecutive quarters of positive cash flow. Linear Technology mostly makes chips for business rather than customer end markets, and many investors might therefore not be familiar with it. For anyone looking for a long-term investment, here are three reasons to look at Linear.

Solid core business
Linear Technology targets the high end of the analog integrated circuit market, and makes products such as voltage amplifiers and battery stack monitors. The analog device market is estimated at an impressive $40 billion per year, but it is also highly fragmented, with industry leader Texas Instruments ( TXN 0.53% ) accounting for less than 18% in share.

The analog market also has some unique features that separate it from other parts of the semiconductor industry. Unlike more commoditized semiconductor markets, analog selling prices have been relatively stable for years, and yet analog devices require lower capital investment. This has particularly benefited Linear, which, thanks to its focus on the high end, has average selling prices that are are above three times those in the general analog industry and a gross margin that tops both analog and general semiconductor leaders. 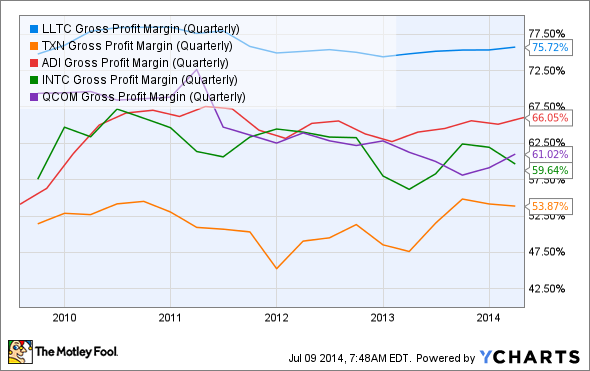 Linear saw more than 10% year-over-year revenue growth in its most recent quarter, and expects to be able to maintain this going forward. The bottom line is also impressive -- Linear's 112 quarters of positive cash flow might only be compared to fellow semiconductor maker Microchip Technology ( MCHP -0.93% ), which has run a profit for the last 94 quarters and is similarly benefiting from proprietary technologies and long-term customer relationships.

Growth opportunities
Besides maintaining its existing business, Linear Technology has good prospects for growing its market share. The company currently only has about 3%-4% of the highly fragmented analog device market.

One of the best growth opportunities for Linear has been automotive, a sector that many semiconductor companies have focused on recently, but one that Linear has been emphasizing for the last 10 years. Thanks to this continued investment, automotive made up 20% of bookings in the most recent quarter for the first time in the company's history.

According to management, the growth in this business doesn't depend on the number of cars, but on the increasing amount of electronics in cars, something that NVIDIA's CEO Jen-Hsun Huang likened to the transition from ordinary phones to smartphones. Management claims that Linear's relationships with car companies are long-running and stable, since the car companies view the electronics as a competitive advantage rather than as a commodity component. This, combined with Linear's first-mover advantage, means that the company isn't exposed to much competition in this segment.

Returns to shareholders
A final reason to like Linear Technology is the company's policy of returns to shareholders. For over 10 years, Linear has paid a quarterly dividend, which has increased every year. In 2013, the dividend had a yield of 2.7%, and dividend payments accounted for approximately 60% of net income.

Also, the company expects to pay down its remaining convertible debt this quarter. Following this, Linear Technology will be clear of debt and expects to remain so for the foreseeable future. As a result, management has said that, following the debt pay down, they will be free to potentially spend more on buying back stock.

In conclusion
Linear Technology has a solid, high-margin business selling high-end components in the $40 billion analog device industry. The company expects to see 10% revenue growth down the line, thanks in part to increasing demand from the automotive industry. In addition, Linear pays a reliable and increasing dividend, and might increase share repurchases in the near future. Even though Linear Technology is not a household name, the company is definitely worth a look as a long-term investment.