Please ensure Javascript is enabled for purposes of website accessibility
Log In Help Join The Motley Fool
Free Article Join Over 1 Million Premium Members And Get More In-Depth Stock Guidance and Research
By Jay Jenkins - Jul 10, 2014 at 8:59AM

Is Bank of America the bank for your long-term portfolio? In this breakdown, we'll evaluate the bank from every angle.

Bank of America reserved $1.0 billion for the first quarter, which represented 4.5% of operating revenue. That compares with 5% for the $10 billion-plus peer group, according to the FDIC.

For Bank of America, these figures tell only part of the story. The bank has been severely handicapped since the financial crisis by billions upon billions of dollars of regulator violations, failed mergers, and, most critically, bad loans. Current management has undertaken a massive reorganization of the bank to simplify operations and reduce risk -- in essence, the bank is finally putting soundness first.

Can the culture really change, though? Fellow Fool John Maxfield is skeptical, and so am I. Credit culture is part of a bank's DNA -- it doesn't change overnight, or even over a few years. It changes over multiple years, if ever at all. The recent capital miscalculation and suspension of a planned dividend increase are symptoms of this diagnosis.

Bank of America may be doing and saying the right things now, but over the long term, the bank's track record simply needs to indicate sustained success.

For Bank of America, the first calendar quarter of 2014 was pretty bad. For the first quarter, the company reported return on equity of negative-5% because of the net loss. Of the banks covered in this series of articles, the average return on equity was 8.9%. The FDIC reports that the average ROE for U.S. banks with total assets greater than $10 billion was 9.1%. 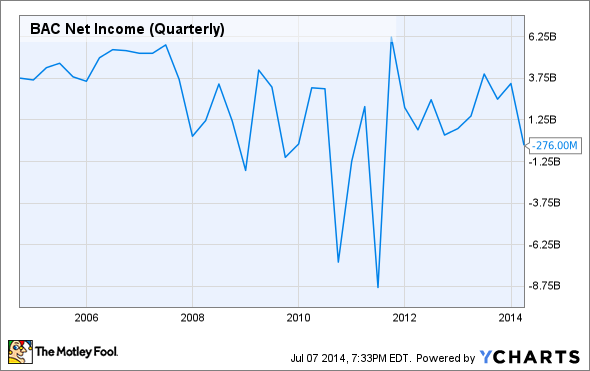 The company did generate total net revenues of $22.6 billion for the quarter -- that is total interest income plus non-interest income, minus interest expense.

And over the past 12 months, Bank of America generated $85.5 billion in total net revenue. Of that revenue, 45% was attributable to net interest income, the difference between interest earned on loans and paid out to depositors. The remaining 55% was through fees, trading, or other non-interest revenue sources.

The bank was able to turn a profit margin of 11% on that revenue, so all is certainly not lost.

The issue with the bank's income statement today is not that it can't create revenue or even run a reasonable banking operation. The problem is massive, non-recurring charges resulting from the bad behavior before the financial crisis. Regulatory fines, Justice Department settlements, and heavy charges related to unscrupulous practices are wreaking havoc on the bank's profits. 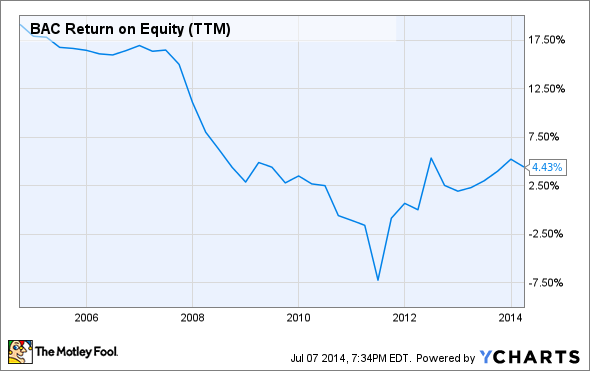 Bank of America's assets-to-equity ratio comes in at 9.3. The average of the 62 banks analyzed in this series of articles was 9.1. 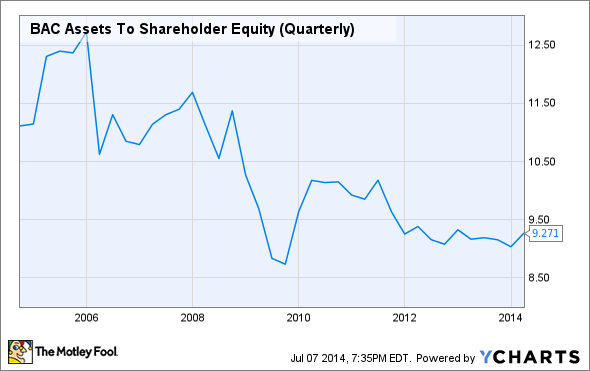 Growth and valuation
Bank of America saw its revenues change by 14% over the past 12 months. That compares with the 5.7% average of the 62 banks analyzed.

Fifty-four percent of all U.S. banks saw year-over-year earnings growth in the first quarter; Bank of America was part of this group -- kind of. The bank didn't grow "profits" per se, but it did lose less money. 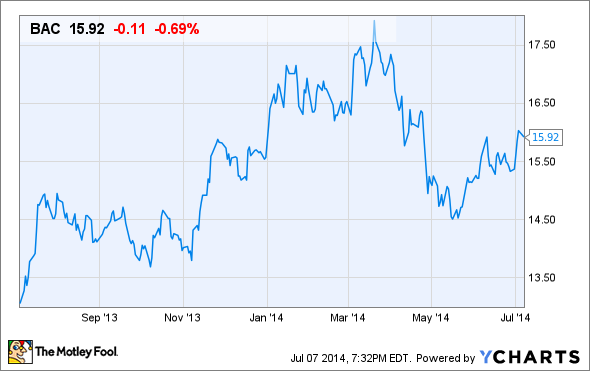 Moving now to valuation, Bank of America traded at a forward price-to-earnings ratio of 11.9, according to data from Capital IQ. That compares with the peer set average of 16.67.

Bank of America's market cap is, at the time of this writing, 1.1 times its tangible book value. The peer set average was 1.9.

Based on the factors we've discussed here -- soundness, profitability, and growth -- Bank of America simply doesn't make the cut.

Yes, the bank appears to be undervalued based on P/E and price-to-tangible book value. But just because a bad business is cheap doesn't mean it's a buy. If you're looking for a bank with real long-term potential -- the kind of stock that can stay in your portfolio for decades -- then look elsewhere.

Jay Jenkins has no position in any stocks mentioned. The Motley Fool recommends and owns shares of Apple and Bank of America. Try any of our Foolish newsletter services free for 30 days. We Fools don't all hold the same opinions, but we all believe that considering a diverse range of insights makes us better investors. The Motley Fool has a disclosure policy.