Shares of the small-format electronics retailer have tumbled 68% this year. Here's why:

2014 has not been kind to RadioShack Corporation (RSHCQ). The stock has fallen nearly 70% as losses pile up and its cash balance dwindles, but the company was already on shaky ground when the year began. Debt was more than three times cash on the balance sheet, and the company was coming off two straight years of losses and negative free cash flow. In 2013, the company saw a shortfall of $400 million on the income statement, and badly missed earnings estimates several times along the way. Hope remained that RadioShack's new concept stores could help save the company, but 2014 has only brought more pain to investors. Here's a look at the trials and tribulations of RadioShack over the course of the year: 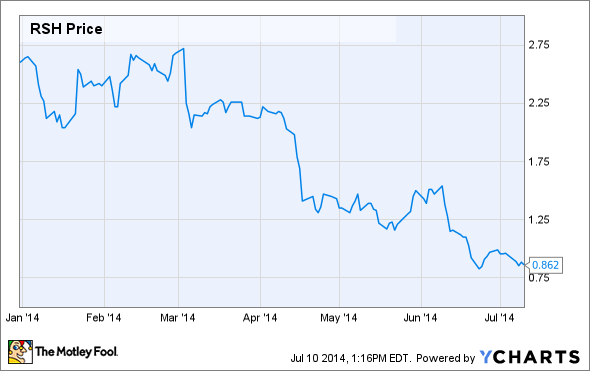 The stock fell 25% in the three days following the report as the retailer posted an adjusted loss of $0.98 per share on a 14% drop in same-store sales. Since then, the stock's demise has only hastened as investor concerns about its liquidity intensify. On June 20, shares fell below $1 for the first time ever, raising the possibility that it could be delisted from the New York Stock Exchange, and the stock has remained under $1 since.

Where RadioShack stands today
Liquidity is the biggest concern for RadioShack right now. Unlike other seemingly failing retailers such as J.C. Penney and Sears, RadioShack is not only experiencing massive losses, but also has severe cash burn problems. As of its latest quarterly report, the company had just $61.8 million in cash, and $423.7 million in total liquidity, including a credit facility of which it's already drawn $35 million since its last report.

Analysts expect the company's wide losses to continue this year and next, forecasting a per-share loss of $3.34 this year and $2.76 next year, and recent estimates have proven to be wildly optimistic, meaning the actual numbers could be much worse. On top of the operational burden, the company is carrying over $600 million in debt, forcing $16.6 million in interest expense in the first quarter. Free cash flow was negative $50.7 million in that period as well.

Foolish bottom line
RadioShack is far from the only electronics retailer struggling these days. Shares of hhgregg are down 32% this year as the big-box chain has faced similar problems with comps declining sharply, and has chosen to focus on furniture sales to stem the losses from electronics. Shares of Best Buy, the industry leader, are down 23% this year. When an entire sector is getting crushed, it's a sign that the challenges facing the individual companies in that industry are beyond their own missteps and the scope of their influence. Online retail is pressuring brick-and-mortar stores, enthusiasm for new smartphones is waning as that category matures, and Radio Shack's brand identity as the place to buy electronics parts feels dated.

Losses are mounting at an accelerating pace, and the company could burn through its remaining cash by the end of the year. Its emergency plan, closing 1,100 of its most unprofitable stores, was vetoed by its creditors. At this point, it's hard to see anything but a small miracle being able to save the company.

Amazon Could Be the Next Brick-and-Mortar Giant

3 Companies That May Not Last Through 2015

Why January 15 Could be Doomsday for RadioShack Corp.