The "Share a Coke" marketing campaign met with great success in Western Europe. Can its success be duplicated here? 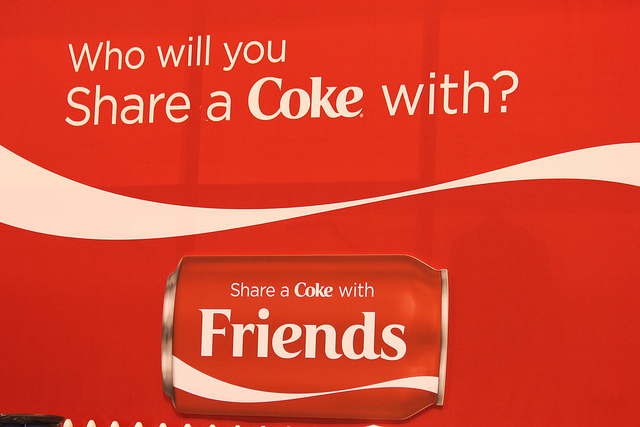 Will it work?
Coca-Cola faces headwinds in the form of the healthy lifestyles movement. Increasingly, many consumers want beverages perceived to be healthy. The "Share a Coke" program will most likely turn carbonated soda volume around in the short term. However, once the program ends and the novelty wears off people may go back to buying bottled water and juices. Also Coca-Cola could incur significant marketing costs if enough people utilize the free 20 ounce coupon counteracting any positive impact from the campaign.

What's the better alternative?
Coca-Cola is trying to come up with long-term innovations like the stevia flavored Coca-Cola Life. Coca-Cola hopes that the healthier perception of its naturally flavored sweetener will turn around beverage volume, specifically its diet soda volume. However, fellow Fool Rich Duprey argues that stevia goes through a manufacturing process that dilutes its natural appeal and that it will do nothing for soda volume in the long run.

Coca-Cola's entry into the home beverage market could spur carbonated beverage volume over the long-term if a person doesn't get turned off by the lack of convenience. Mixing Coca-Cola may make sense in areas of the world that lack convenience stores and street vendors.

Perhaps Coca-Cola could make this "Share a Coke" program more permanent? Maybe even allow people with uncommon names to specially order Coca-Cola bottles or create a machine that could personalize bottles on the spot. This represents the only way the campaign could make a long-term impact on beverage volumes.

Foolish takeaway
Coca-Cola and Coca-Cola Enterprises' investors should expect a volume boost in carbonated beverages as the campaign remains in full swing in North America and Western Europe. However, Coca-Cola still needs significant product innovation on the carbonated soda front to combat declining volume over the long-term. Moreover, Coca-Cola needs to figure out more ways to differentiate its non-sparkling portfolio giving its juice, tea, and water products the moat the Coca-Cola brand enjoys.