Zack Danger Brown, a veritable culinary unknown, posted a request on Kickstarter for $10 to make his first potato salad, and boom! Faster than an Internet signal could make your computer say "You've Got Mail," he had more than 5,000 backers and is now approaching $50,000. Really? In truth, it's taken a week. But still.

Those of us who've tried to raise capital for anything may shake our heads and feel a little sheepish. Zack's success makes all that business-plan writing and finding-a-lender stuff look like so much extra -- and unnecessary -- work. But then we laugh: "Good for him."

The secret ingredient: Crowdsourcing
The secret to success in this project – aside from some good fun gone viral – is crowdsourcing. While we've been hearing that term more in recent years, it's a technique that's been around for a very long time. Set a goal – whether it's innovation, fundraising, vote gathering, data collection, or ... potato salad – and create a sense of community around the cause. When participants feel as if they're "on board" with something and their contributions to the group actually matter, they're in.

Another crowdsourcing platform, Kiva, uses the technique to provide micro-financing to various projects around the world. Kiva posts projects from individuals, the majority of whom are in underdeveloped areas. Kiva displays the entrepreneurial ambition, photo, and the amount each candidate needs to raise to, say, buy a food vending cart or purchase a sewing machine. Kiva members then make a loan toward the goal. Over time, the lender repays the loan, leaving funds to reinvest in yet another initiative. The program succeeds because it drives a high sense of personal engagement, from creating a direct connection between borrower and lender, to encouraging team-building to make larger Kiva donations.

Crowdsourcing can also be effective for innovation and raising brand loyalty. Anheuser-Busch (NYSE:BUD) employed the technique in the creation of Black Crown, a premium golden amber lager. The project, which was intended to bring craft beer fans back into the fold, combined a competition among company brewmasters with suggestions and tastings by more than 25,000 consumer-collaborators. By fostering a sense of community, the company likely established a loyal base of followers, and through a fun and entertaining format also managed to broadcast the message: "We care about what you think."

Back to Kickstarter
Kickstarter earned a lot of press recently when LaVar Burton and Reading Rainbow used the platform to raise funds to revitalize the literacy program. Not only did the campaign reach its initial goal of $1 million, but the project went viral, going on to exceed $5 million in funding.

That meant great success for Reading Rainbow and a huge lift in recognition for Kickstarter. No doubt, the project gained extra traction because the original Reading Rainbow TV show, which began airing in 1983, was a childhood staple for adults who are now parents of little ones -- and also prime consumers of social media. In a sense, that group was like family already.

It seems that – like potato salad – a campaign whose mission ignites the virality match and engages people to contribute and tell others can spread like wildfire.

While Kickstarter has raised more than $1 billion in funding for a variety of entrepreneurial and arts-related projects, there are many projects that gain little to no traction. Using Kickstarter's own numbers, we evaluated project success by category. Dance, theater, and music have had the most success, perhaps because these are types of projects that are most likely to come to the site with a group or have an established community. Food -- potato salad's category -- is somewhere in the middle. 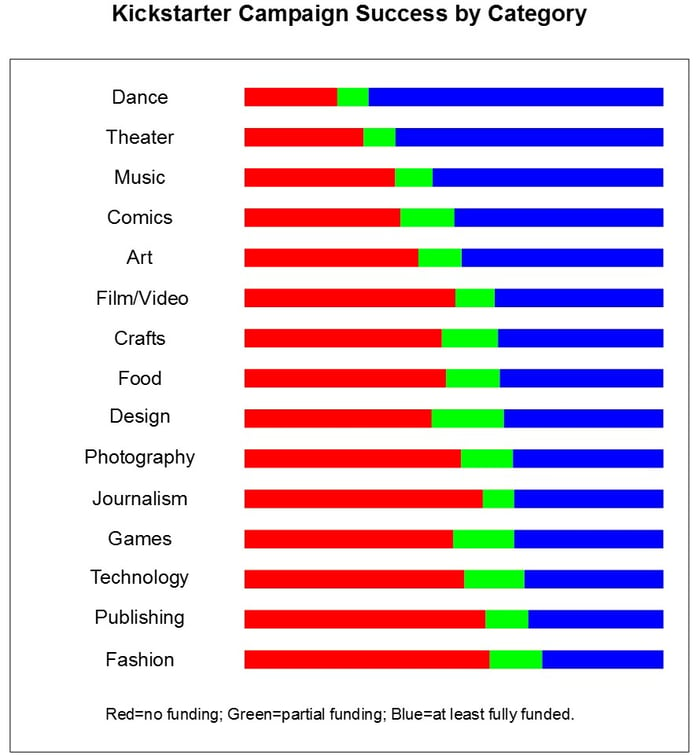 Finally, while those who have been following the potato salad story stand by in amazement, there have been a few detractors. Some have suggested that Kickstarter has violated its own standards by letting what they consider to be a silly project run wild. There are other sites that allow for crowdsourcing more whimsical endeavors. Kickstarter may be letting it run to enjoy a boost to its brand and hits to its site.

In the meantime, Brown plans a huge potato salad party for his supporters. He has also indicated that he plans to direct the extra funds to "doing good." For someone who has yet to make a potato salad, this is a big deal, indeed.

What can potato salad teach businesses and organizations looking to innovate, grow audience or raise funds? Engage, engage, engage. People want to feel as though they are invested, that their contributions can actually be a part of a much larger sum. Crowdsourcing done well strips away the sense of anonymity and engages a virtual community. Pair it with smart social media, and you may well be on to the next 'tater party.

Side note: The ongoing tally for contributions to the potato salad project has been reported on Kickstarter as high as $75,000 as of Thursday, July 10. But that number has shifted downward regularly before rising again. The reason for the fluctuations was not explained. The project closes on Aug. 1, and the final number will be determined then.