Those reports could weigh on the stocks of computing device manufacturers, as the companies are major suppliers to the PC (Intel) and mobile markets (SanDisk).

The revenge of the PC
Despite attempting an aggressive move into the mobile device market, Intel's business remains largely dependent on the demand for traditional -- laptop and desktop -- PCs. That's not necessarily a bad thing, at least for now, as the end of extended Windows XP support seems to triggered a significant PC refresh cycle.

Last month, Intel raised its guidance for the second quarter, saying that it expected to post revenue of $13.7 billion -- $700 million more than it had originally forecast. In addition to better revenue, Intel anticipates a slightly better (up 1%) gross margin, as demand for its PC processors appears to be coming in better than it had expected.

Intel has been one of the best-performing major tech stocks in recent months, rising nearly 20% since it last reported earnings. Investors might assume that expectations for a strong quarter are already baked into Intel's share price, but its price-to-earnings ratio is still below the broader S&P 500. 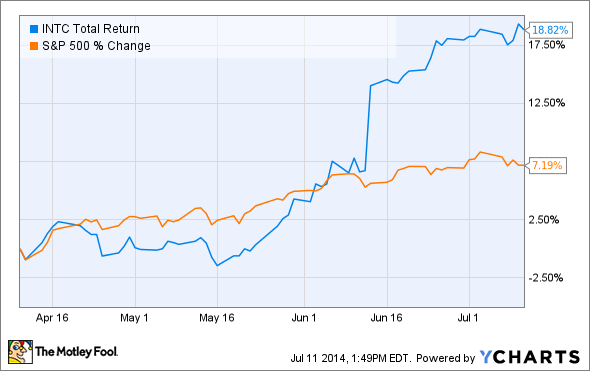 In addition to Intel, investors might expect other PC-related stocks to react to the company's report. Many other PC firms have seen share price appreciation (roughly in line with Intel's) over the last few months, and a much better or much worse than expected quarter could trigger moves in other PC names.

A check on flash memory demand
SanDisk will release its second quarter earnings results a day after Intel, with a conference call to discuss its quarter after the market closes. Analysts are expecting SanDisk to post earnings per share of about $1.39 on revenue of roughly $1.6 billion.

SanDisk's results should shed some light on the state of the flash memory market, and by extension, the demand for mobile computing products. Although SanDisk supplies sold state drives for both enterprise storage and traditional PCs, it's also a major mobile supplier, and management might be tempted to release strong guidance if reports of an excessively large iPhone 6 order are accurate.

Given that flash memory is a growing market, SanDisk presently trades with an above-market price-to-earnings ratio near 22. A worse-than-expected quarter could trigger a severe sell-off. Nevertheless, analysts remain undeterred. Last month, Merrill Lynch upgraded SanDisk to buy from underperform with a $125 price target. Analysts at the firm saw little risk to SanDisk's business from its competitors, and believed that the market for its products remains healthy.

What to Expect in Tech Next Week: Intel and SanDisk Earnings @themotleyfool #stocks $INTC Next Article
Current