The spread of genetically enhanced agricultural crops in the United States has been nothing short of amazing. Since arriving on the commercial scene in 1996, soybeans, cotton, and corn engineered to withstand herbicides, insecticides, or both had captured as much as 93% of their respective market as of 2013. That has meant big business for trait companies such as Monsanto (NYSE:MON), Dow Chemical (NYSE:DOW), and Syngenta (NYSE: SYT). 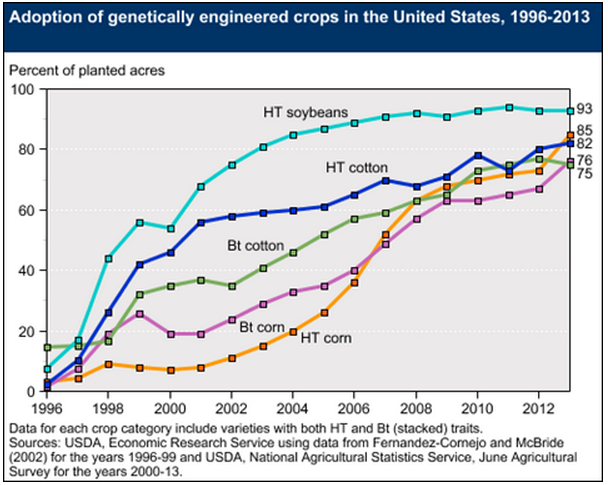 While the success of biotech crops has been driven by providing farmers viable pest control options to boost yields and profits, it's important to remember that they're just another tool. That means their benefits can be washed away if used improperly. Careless use (farmers) and poor monitoring (companies, regulators) of biotech crops will inevitably lead to the emergence of resistant pests. Indeed, there are now weeds that can survive glyphosate, or Roundup, and corn rootworms that can turn the other cheek to the natural toxin from Bacillus thuringiensis, or Bt.

Superpests would emerge even in a world without biotech crops, but over-reliance on single pesticides and refusal to plant refuge plots amplify the selective pressure for resistance. How do you make it easier for farmers to follow the rules? Refuge-in-a-bag products will provide a partial solution to the lack of refuge plots. Tackling the problem of superweeds will require a bit more novelty. Luckily, Dow Chemical is nearing approval of its Enlist Weed Control System, which consists of a proprietary mixture of glyphosate and 2,4-D herbicides -- and crops that can resist lethal doses of both.

Enlisting science!
Giving farmers a crop that resists lethal doses of one herbicide can lead to obvious problems. It's not that farmers are widely applying too much glyphosate for any given harvest (that would cost serious cash), but using glyphosate every harvest, rather than cycling through herbicides to decrease the selective pressure for resistance in weeds, adds up over time. So, why not make a crop that resists more than one herbicide? Well, that's exactly what Dow Chemical conjured up.

Stacked traits may sound like a new invention, but they are actually more common than single traits thanks to robust trait licensing practices within the industry. While glyphosate-tolerant crops are most commonly associated with Monsanto, nearly every major seed company wields similarly hardy crops. For instance, Agrisure 3000GT corn from Syngenta provides farmers herbicide tolerance (glyphosate) and insecticide tolerance (Bt), as do multiple other brands for cotton, soybeans, and corn. Despite the dominance of stacked traits, the new Enlist system will pioneer stacking multiple herbicide traits. If the spectacular success of first-generation stacked traits is any indication of what awaits Enlist and others, then Dow Chemical and Monsanto could be on the cusp of another spectacular growth phase.

How will it work? Farmers will apply a mixture of glyphosate and 2,4-D (the most widely used herbicide in the world) supplied by Dow Chemical to their fields. The company, the U.S. Environmental Protection Agency, the U.S. Department of Agriculture, and farmers are hoping the new stacked herbicide traits slow the spread of superweeds. Others aren't so sure.

Potential problems on the horizon?
Unfortunately, the future isn't as rosy as seed and trait developers would like. Although there is a massive body of evidence supporting the safety of 2,4-D, there are disagreements over interpretations of that data. Meanwhile, the USDA expects use of the herbicide to increase by as much as 576% from 2011 applications. That could be good for Dow Chemical, but potentially bad for the environment. Scientists are also wary of the benefits of stacked herbicide traits. They would be welcomed tools now, but would they create more superweeds faster in the long run?

Of course, there is obvious value to stacked herbicide traits. While Enlist is meant to be used with a mixture of glyphosate and 2,4-D, future crops might tolerate multiple herbicides while they are cycled over multiple harvests. One year farmers would use glyphosate, the next year farmers would use 2,4-D, the next yet another. Such a system would allow modern agriculture to truly reap the benefits of biotech and work to slow the emergence of superweeds.

Foolish takeaway
Stacked traits developed by and licensed between Monsanto, Dow Chemical, and Syngenta wouldn't be wildly successful if farmers didn't find them useful -- and Enlist should be no different. If two traits aren't enough to convince you that superweeds may be dead, consider the near future. According to Wired, Dow Chemical has "patented a mechanism that would allow up to nine types of herbicide [tolerance] to be engineered into a single plant." That would lay the groundwork for cyclical herbicide applications and drastically slow -- and perhaps even reverse -- the spread of superweeds. Investors stay tuned.