Although rival Amazon.com receives most of the investor attention, eBay stock might prove attractive as it heads into earnings next week. 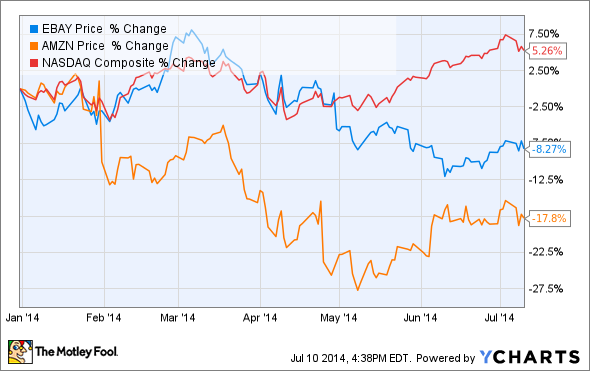 Amazon.com reports later this month, but not before eBay opens its books for the world next week. Here's what investors should be on the lookout for from eBay.

eBay earnings: An opportunity in plain sight?
Investors have been down on eBay since late 2012, which is understandable, but only to an extent. To be sure, the constant (but unfair) comparison to Amazon.com, and its seemingly continual +20% growth rate, has tainted eBay as the underachiever among the two. However, eBay's upcoming earnings will hopefully reiterate why it, and not Amazon.com, could be the better buy at the moment.

Analysts are calling for eBay to produce high single-digit to low double-digit growth on both the top and bottom lines; again, it's not Amazon.com, but certainly respectable for a company of eBay's size. However, it's when you compare eBay's mix of moderate growth that's supported by several long-term tailwinds, such as the ongoing growth opportunity at eBay's PayPal unit, for instance, to its seemingly reasonable value of 12x EV/EBITDA, that should hopefully get investors attention.

Tech and telecom specialist Andrew Tonner argues that, while Amazon.com gets all the love, eBay's upcoming earnings should once again demonstrate why eBay might appear particularly attractive today.