Despite its shares soaring and losses turning into gains, Rite Aid isn't in the clear yet. Whether its competition from Walgreen and CVS Caremark, supplier concerns from McKesson Corporation, or internal issues, the company has plenty that could go wrong!

Rite Aid (RAD -0.31%) has been one of 2014's hottest stocks. Year-to-date, shares in the country's third-largest drugstore chain are up over 44% from their 2013 closing price of $5.06. While this is significantly higher than the 7% increase seen by the S&P 500, some investors might be wondering whether now is a good time to take some cash off the table. Here are three risks investors should be watching with Rite Aid when making these decisions.

Competition is fierce!
The past few years have shown investors that Rite Aid can recover amid a tough market and in spite of strong competition stemming from CVS Caremark (CVS 1.72%) and Walgreen (WBA -0.29%). Although sales for the company have ticked down modestly from $25.7 billion to $25.5 billion, management has initiated cost-cutting plans that have turned Rite Aid's net loss of $506.7 million in FY 2010 into a gain of $249.4 million for FY 2014. As business continues to improve, and as growth picks up speed, it's likely that investors will see revenue growth resume, but the threat of competition continues to linger over the company's head. 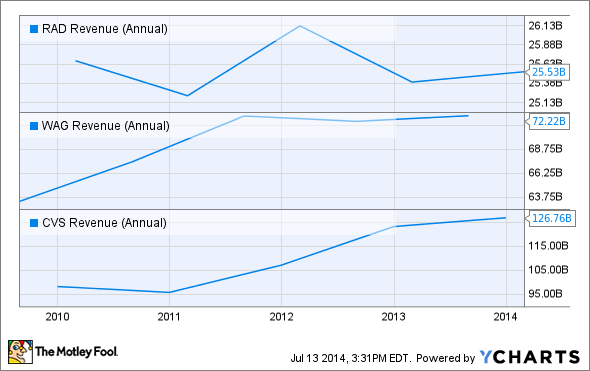 As an example of this, let's look at Walgreen. Between 2009 and 2013, the company's sales have jumped 14% from $63.3 billion to $72.2 billion as increased store count and rising comparable store sales have pushed the company's top line up. CVS' performance has been even more extreme, with sales climbing 29% from $98.2 billion to $126.8 billion, as the same factors that worked for Walgreen were even more at play.

From a profit standpoint, things have been even better for both of the heavyweights in the business. Over the past five years, Walgreen's rising sales, as well as other income coming from its 45% stake in Alliance Boots, have sent net income soaring 22% from $2 billion to $2.45 billion. CVS's bottom line results have come in stronger. Between 2009 and 2013, the drugstore giant reported a 24% rise in net income from $3.7 billion to $4.6 billion, driven by rising sales but partially offset by a 32% rise in the company's cost of goods sold. 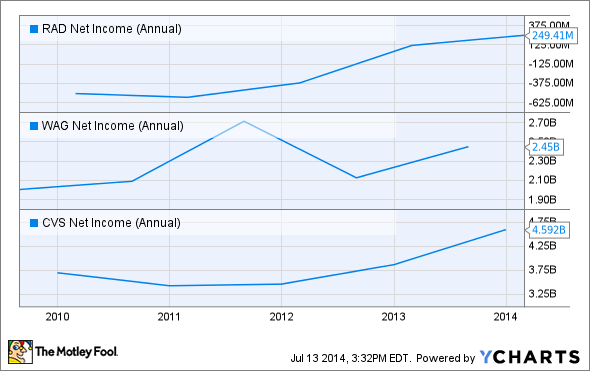 Given the significant sales and profit advantages both of these retailers have over Rite Aid, it's not unreasonable to anticipate a potential squeeze against the company as both competitors strive to consolidate their power.

Supplier concerns
Aside from the threat of increased competition from CVS and Walgreen, Rite Aid's turnaround could be derailed if its long-term supplier, McKesson Corporation (NYSE: MCK) faces any meaningful difficulties. During 2014, Rite Aid expanded a long-standing relationship with McKesson that stipulates that for the next five years (beginning in 2015), it will acquire almost all of its name brand and generic drugs from the firm.

While this deal likely brings with it preferred terms compared to what Rite Aid might get if it received its drugs from multiple suppliers, it also carries with it significant risk if McKesson faces any disruptions. Fortunately, this seems to be unlikely, but given the fact that McKesson's net income has stayed virtually unchanged while its revenue has risen 27% from $108.7 billion to $137.6 billion suggests that the company's not in perfect shape either.

Trimming extra
After acquiring both Eckerd Pharmacy and Brooks Pharmacy in 2007, Rite Aid saw its revenue shoot up 39% from $17.5 billion to $24.3 billion in 2008. As a result of this transaction, the company became the largest stand-alone drugstore chain in the Eastern U.S. and made what it thought was an important step in catching up to Walgreen and CVS.

Since its purchase, however, the company's results have been anything but great. In 2009, the retailer reported its largest annual net loss of $2.9 billion and, by the end of 2012, had accumulated a net loss of $4.3 billion since its acquisition of the chains. In an effort to turn operations around, management decided to shutter underperforming locations and is still in the process of doing so today.

So far, management has closed roughly 9% of Rite Aid's stores since March 1 2008, bringing the retailer's store count down from 5,059 to 4,587. While this initiative appears to be working, an inability of management to wind down additional underperforming stores could send profits tumbling back into the red should the business's sales fall or costs increase.

Foolish takeaway
Right now, Rite Aid is seeing an impressive comeback in terms of profitability but has been plagued by relatively poor revenue performance. In spite of this disparity between good and bad, management appears to be moving the retailer forward, but it's important for the Foolish investor to remember that it wouldn't be too hard for the company's turnaround to be derailed. If competitive pressures push the business back into the red, or if its only significant drug supplier falters, or in the event that more of the company's underperforming stores in a timely manner, the downside for shareholders could be severe.

Daniel Jones has no position in any stocks mentioned. The Motley Fool recommends CVS Caremark and McKesson. Try any of our Foolish newsletter services free for 30 days. We Fools may not all hold the same opinions, but we all believe that considering a diverse range of insights makes us better investors. The Motley Fool has a disclosure policy.